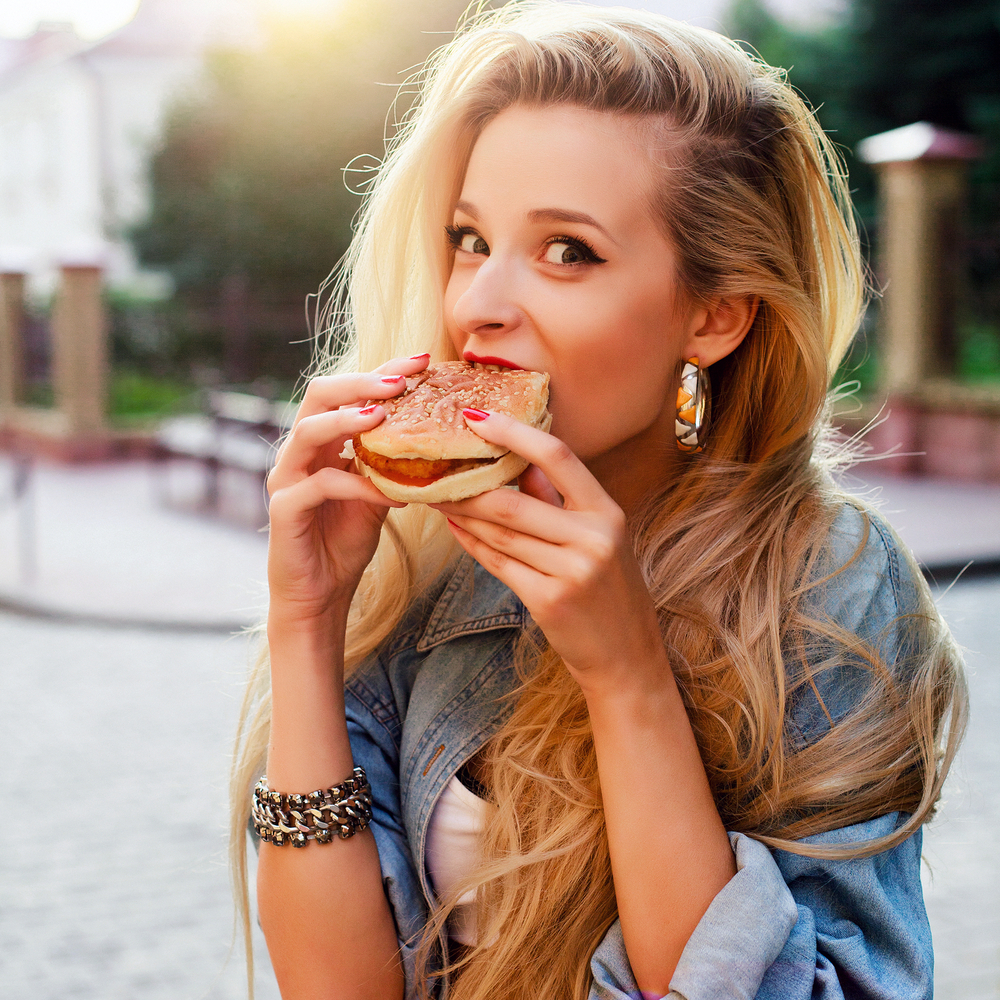 “What happened? Are you okay?” my boyfriend came rushing to the bathroom to my aid from the other room. Not really. He kept playing video games, but he did look up for a second.

“Nothing. My eyeliner just looks so fucking good right now.”

I stared at myself, and danced around in the mirror to whatever was blasting from Britney Spears Pandora. And I don’t have enough shame to keep this from you. I started making faces at myself. I raised my brow. I bit my lip. I blew kisses. I touched my body, seducing the only person who’d ever truly be obsessed with me (myself) as if no one else in the world mattered (because they didn’t). I was having a good hair day, a good face day, and dammit, I was having a good boob day. Was there anyone on the planet hotter than I was? Seriously? Bring them to me, because I won’t believe you otherwise.

I grabbed my phone to immortalize this moment via social media. Everyone who knew me should get to bare witness to the vision I saw before me. It would straight up be selfish to hide something so beautiful from the world. And as I gazed into my front facing camera, I thought, What the FUCK?

Is that what I really look like? My pores. My fat face. The bags under my eyes. Those chins! Who needs all those chins? I swore there was only one just a moment ago, but they multiplied, and they keep multiplying. I took thirteen selfies, decided I hated all of them, and put my phone away.

This wasn’t the first time something like this had happened. I’ve oft found myself having the audacity to walk around the world like a hot girl might — confident with a pep in my step, expecting that the whole world notices when I walk into the room — only to catch a glimpse of myself in a Nordstrom Rack mirror, and assume that a water buffalo was passing by, only to realize that the water buffalo was me. I’ve legitimately gasped at my own reflection, upon realizing that what I thought would be a bright, happy face that “doesn’t need makeup,” was actually a tired old crone who seems to have had an aversion to sunlight for the better part of a decade.

Being a person whose life has been made public — to a small audience, but public nonetheless — I’ve also been exposed to people feeling comfortable sharing with me their opinions of me. And in this world, nothing can be said to be certain, but death, taxes, and the notion that if people don’t like what a woman has to say, they will attack the way she looks, because beauty is ultimately what women are valued for. (Sad!) The onslaught of people picking out my physical flaws — often ones I’ve noticed in myself, now being confirmed to me by strangers (oh happy day!) — in conjunction with the positive affirmation on my appearance has left your girl at a little bit of a loss when it comes to what I actually look like.

And with this, waves my confidence. I find myself wondering constantly if I really am *that bitch* or if I’m maybe — just maybe — the ugliest mutant lady who has ever walked the Earth. I don’t think I’m alone when I say that sometimes I’m feeling myself to the point where it’s obnoxious, and sometimes, the thought creeps up, and I’m reminded that the uglies don’t know they’re ugly, and I could be one of them. And so I’ve developed the most profound thing you’ll ever hear:

Confidence is a sandwich.

A sandwich, you fucking weirdo? Yes, a sandwich. Hold your applause, because I’m about to drop some knowledge on you.

Top layer. The bread. Positive confidence, because carbs are good. This is what you show the world — your persona. When you’re feeling yourself, out in the world like “What the fuck ever, Jessica. I don’t really care if I was a psycho to Jason the other night, because guess what. I have great tits, and I’m too hot for him, and frankly, he’s just going to have to deal with it. Let’s go get free drinks from dudes desperate to bed us at the bars, because we don’t pay for drinks or wait in lines, because we aren’t peasants.” On the outside, you’re that confident bitch, emphasis on bitch, who knows she’s the hottest girl in the room, and wants everyone else to know. You act like you’re hot. You talk like you’re hot. For all intents and purposes, you are hot. At least emotionally.

Then, the thickest layer is the meat — and the big meaty portion of it? Is a HUGE layer of “what the fuck?” These are the insecurities. This is where your love handles, and your cellulite, and your old nose live. Yes, we are still talking about you, not me. In this giant section just below the surface is where you are terrified you’re not pretty enough, you’re not skinny enough, you’re not blonde enough, whatever. From this section, FaceTune was born. Your crippling obsession with Instagram. Every insult you’ve ever received, every guy who didn’t text you back, every bad photo piles up here, each one whispering “you’re heinous” — which would be fine, but if enough voices are whispering the same thing, it gets kind of loud. And creepy, tbh.

Beneath that, is a tiny layer of bread — like tortilla level of thickness — that tells you “But wait. I actually know I’m pretty. Technically.” You look at the people surrounding you, and they’re all generally good-looking. And then you go someplace like a Walmart, or a Uhaul, or an amusement park, and you get a good glimpse at what the average person looks like (the real average, not the sorority girl average), and you’re like “yeah. I’m cute. And not that my value is measured by who would fuck me, but like, most people would.”

And then, you realize that you just compared your entire life’s worth to a sandwich, and you’re like, does it even matter what I look like? My personality is shit..