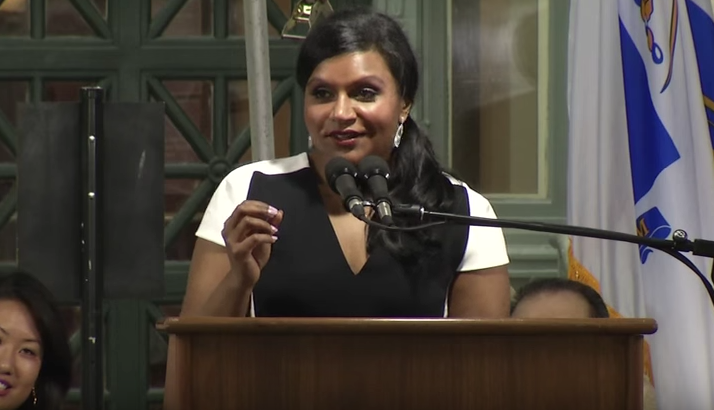 In the next few days, a lot of exciting things are happening for the graduating class of 2017. Odds are, you have a final or two left between you and the adult world, and let’s be real — your exam in Mass Com Law isn’t even a big deal anymore. If anything, your last tests are nothing more than a bittersweet finality. A way for you and your professors to laugh about the fact that in a mere 3-36 days, you’ll be undergoing real tests, like how to pay rent or whether or not you should move back home. But for now, you’re in the lovely limbo between college and life. You’re busy decorating your cap, visiting your favorite college bars one last time to say goodbye, and trying to make every second between now and graduation stretch as long as possible.

And while the big G seems like a huge deal, once you’re actually there, it tends to be the perfect nod to college: a giant, overfull lecture that you try to act interested in but you’re really just teetering between still-drunk and dreadfully hungover. The worst part? The speech. Unless you went to a great school, odds are your graduation speaker might not have the most profound wisdom. You’ll hear words like success, family, and dreams a whole bunch before you finally nod off into the open-eyed nap you’ve long since perfected. But, since I’m an old sap and think that this *is* a big deal, I wanted to throw some wisdom on you. Since I don’t actually have a lot of wisdom (or good looks or success or money), though, I decided celebrities should do it.

Here are some of the best celebration graduation speeches ever. Pick your favorite or watch them all because honestly? What else are you going to do between now and commencement?

I have to start here, and I’m sorry, but my girl brings. the house. down. From her honesty and self-deprecation, one of the most successful, imaginative, and accomplished women gives one of the best speeches I’ve ever heard. From discussing her own failure (yeah, she had it really rough for awhile), to talking about following your imagination and building off of your fear, Jo knows how to thread her magical wisdom and inspire you. Now, if she would just tweet me back…

Talking to the graduates of Harvard Law, Mindy is just so perfectly Mindy. From making fun of herself to giving profound advice about shaping the world and not taking our advantages for granted, it’s like watching an insightful episode of her show that makes you wish for the millionth time that she was your best friend.

Come on, you have to admit: You’ve missed American’s number one embarrassing dad. And boy, do I just love watching this man speak. He talks about personal progress, and how to keep going when you feel like you keep taking steps back. How to make the world a better place and how to define what that even means. And also, the dad jokes.

“Usually when you’re wearing a robe at ten in the morning it means you’ve given up,” and “when you’re older, most of you will be gay.” Guys. Want to laugh and cry and feel a little less alone? Ellen does that with a grace and humility only Ellen can. Take the nine and a half minutes to be moved and learn what success looks like from one of the most successful people out there.

In one of the most watched commencement speeches ever, Jim Carrey talks about the importance of not getting lost in the shuffle of everyone and truly being yourself. It’s easy to be “safe” and to not try for what you want and to be battered into sameness and failure. Don’t fall for other people’s shit and, you know, do you. You can play it safe, but then why play at all?

It’s strange to think of Oprah not winning at literally everything, but as she weaves her story of growth and professional flops, you actually feel less alone. Even the most successful people have that feeling of dread. That feeling that things aren’t going as you’d hoped. That you’re not quite good enough. Think about “who” you want to be, not just “what” you want to be. In this world of uncertainty and shaky politics, Oprah’s speech from four years ago touches on everything we need to hear.

Easily one of the funniest and most well-delivered speeches, Colbert takes on all of the hard questions graduates (and people in general) are faced with as they try to achieve success and find happiness. He talks about having your own standards, and that, while you want the best for yourself, you need to know how to cut yourself some slack. That our job is to prove everyone wrong but to have fun while doing it.

I have to say, it’s hard for me to imagine Natalie Portman feeling like she’s wasn’t enough. Still, as she talks about her journey through college and feeling like she had to prove herself, it ends up being painfully relatable. It isn’t about what other people think success is. It’s about what you think success is. Find what you love, and go after it with a passion. It doesn’t matter if other people don’t get it. They don’t have to. As long as you understand, as long as you love it, and as long as you’re proud of yourself, that’s all that matters.

The sheer fact that Ed “Andy Bernard” Helms went to Cornell to give the commencement speech is fantastic in itself. If you’re a fan of The Office you know that Nard Dog went to the school and likes to remind people of it occasionally. Still, his speech goes into pushing yourself and shoving self-consciousness aside. How you need to scare yourself, and how those scary moments are what’s going to make you grow. Focus on the present, and don’t dwell *so* much on the future. Be foolish, and never stop living in the good old days.

The silly guy from It’s Always Sunny talks about how his choices led him to do what he loves. How he was faced with taking an ordinary financial job or following his dream, and he had to choose time and time again not to settle. From creating your own opportunities to learning how to always bet on your “Plan A,” Charlie is easily one of the most insightful speakers to ever give a big “fuck you” to YouTube commenters. As he says, “you do not have to be fearless, just don’t let fear stop you.” Who knew the guy who eats cat food on TV is so inspiring?

Finally, one of the queens of comedy does it all. She embarrassed her cousin and sings the National Anthem as Beyoncé. She tells you to take a million swim suit pictures now and finally, she touches on the importance of the improv comedians’ mantra, “Yes, and…” Agree to try new things and add something to it. Make things your own and don’t be afraid to dive head first into opportunities to grow and fail. Finally, don’t be afraid to belt out a tune like literally no one is watching.

To sum it all up: If you don’t fail, you’re not living. And if you’re living without failing, you’re not really living at all. Don’t think your resume is your life, and if all else fails, just keep in mind that none of us have any effing idea what we’re doing. Don’t worry. You got this. And if you want a speech you’ll actually enjoy for your grad school graduation, try to get into Harvard..