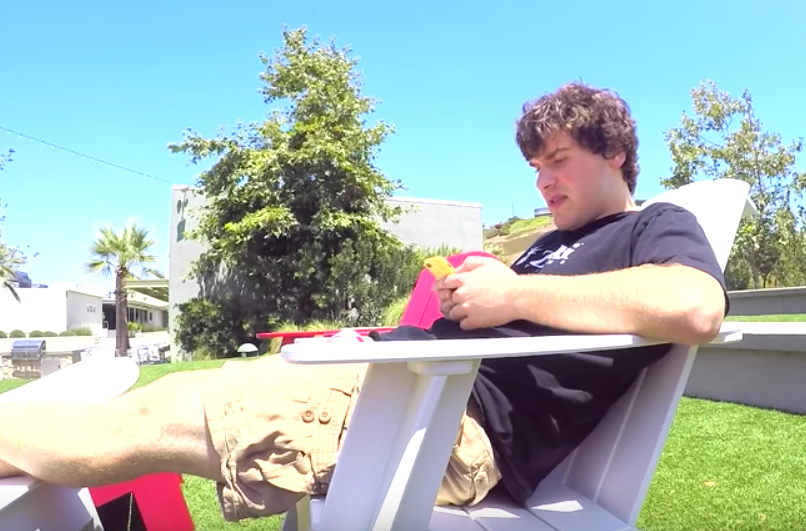 Social media has the incredible power to bring people together. You can get to know people who would have never crossed paths with otherwise. And with all the apps that have been invented, it has never been easier to find love. Unfortunately, you can find love that you can never get back. When you have a crush on a celebrity, it’s easy to accept the fact that you’ll never meet them in real life because they are a celebrity. But when it comes to people who are famous on the internet. It’s totally different. Because they have that “regular person” appeal, it’s easy to convince yourself that you actually have a chance of meeting them and spending the rest of your life with them, just as I have with the following people:

App Of Choice: Youtube
Why I Have A Huge Crush: I’ve been in love with Jimmy Tatro since his early days talking about McCoy and how frat he was, but seeing him in 22 Jump Street gave me the biggest lady boner of all time. He’s dating Emily Osment now, but girlfriends are like goalies. Just because they’re there doesn’t mean you can’t score.

App Of Choice: Vine
Why I Have A Huge Crush: Not a day goes by that I don’t quote his vines. I could spend days in the car with him, which he seems like he lives in. I’m ok with that though, he’s funny enough to make up for it.

App of Choice: Twitter
Why I Have A Huge Crush: He’s cute in a nerdy way and his weird ass tweets are addicting to read. Actually, now that I’m scrolling through his Instagram, I can’t tell if he is cute or frightening. Jury is still out.

App Of Choice: Youtube
Why I Have A Crush: I’m not exactly Matt’s type, if you catch my drift, but I would give my left tit to drink a bottle of wine and bitch about the world with him. He seems like the perfect guy to call after your boyfriend breaks up with you. Every girl needs a friend like that.

App of Choice: Vine
Why I Have A Crush: He has scraggily, long hair and talks in a lisp in most of his vines, but I still want to make out with him for some reason. I’d let him smoke me up any day, even though he doesn’t. But he probably does.

App Of Choice: Vine
Why I Have A Huge Crush: Look at that FACE. I just wanna squish his little cheeks while he mocks me and my friends. Girls are his main target and I would be mad if he wasn’t so spot on. He’s frustratingly adorable.

App of Choice: Twitter
Why I Have A Huge Crush: I have no idea what he actually looks in real life but his handle is @dubstep4dads and that’s hilarious so I love him.

App Of Choice: Twitter
Why I Have A Huge Crush: I don’t want to hook up with Shay as much as I want to be her, but if she offered I wouldn’t say no. This girl has slayed more frat guys than me and my pledge class combined, and she is everything I aspire to be and more. The first time I found her Twitter I scrolled through it for an hour and laughed until I cried. She is the real deal.

App of Choice: Vine
Why I Have A Crush: We all have Nick to thank for the most memeable child of all time, Gavin. Seriously, there is no situation that a picture of Gavin doesn’t fit. He is the joy of my life. And Nick is cute too I guess. I like a fun uncle way. A funcle.

App Of Choice: Instagram
Why I Have A Huge Crush:

App Of Choice: Vine
Why I Have A Huge Crush: I put them together because you can’t have one without the other, and I’m totally fine with that. Also, if my parents met them they would hate them, which makes me love them even more. You’d never be bored around them and now that they’re on tour, they’re basically living the dream. All I want is to be the meat of a Nick-Getter sandwich. Is that too much to ask?!

App Of Choice: Youtube
Why I Have A Huge Crush: Nothing gets me horned up like watching Ian dance. Seriously, take at least 4 hours out of your day and just watch him. It’s mesmerizing.

App Of Choice: Youtube
Why I Have A Huge Crush: Not to brag, but I knew about Bo Burnham when he was just making small videos on Youtube. Now he has comedy specials and has become the subject of all of my sexual fantasies. He’s musical, he can sing, he writes the most clever lines, and he has a darkness to him that makes me want to spend the rest of my life trying to fix him.

Be still my beating heart..