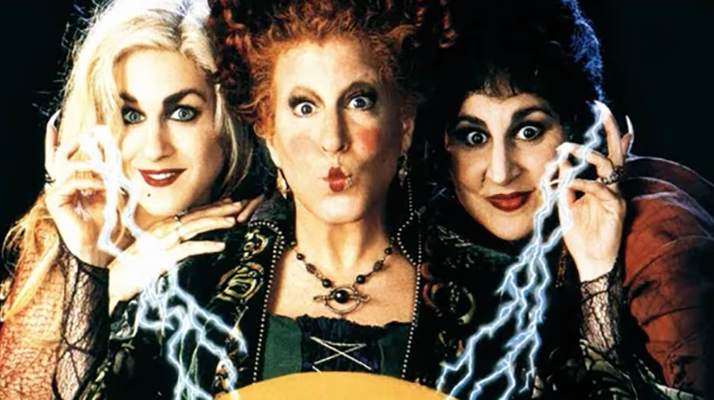 Growing up I loved to play dress up and pretend I was a multitude of things. I’d put on my mom’s wedding dress and be a bride. I’d throw a feather boa over my shoulders and be a popstar. But the best one? Ignoring my chore of sweeping the floor, and using the broom to pretend to be a witch. I’d pretend to be a witch all year, not just at Halloween time.

The constant reruns of “Sabrina, the Teenage Witch” that made up the early ’00s sure didn’t help. Witches weren’t evil! They were just glorified cat ladies that could fly and make wacky hi-jinx happen with the point of a finger. So during October I like to relive my days of pretending to be witch. I grab my black cat Binx, light a Bath And Body Works candle (v spooky), curl up with a blanket, and load up on all the best witchy movies.

A group of high school friends conjure up some old spirits and find out they have powers. It starts out innocent as they make guys fall in love with them. Because duh. Then things start to get out of hand, and the rituals and spells get darker. Highlights include black nails, dark lipstick, and loads of ~goth~ outfits that made the ’90s.

As if I even need to tell you what it’s about. The movie that invented witchcraft and Sarah Jessica Parker. Still a weird amount of focus on virginity for a Disney family movie, though.

If you don’t have an emotional connection to all things HP, you had a terrible childhood. Or you didn’t have ABC Family at your house.

Kirsten Dunst voices “Kiki” in this animated movie. Kiki flies off to move to a new town after she “comes of age” (she’s like 13) and starts a new life in a cute little villa learning how to use her powers. Plus there’s a talking cat. That’s all you really need to get me hooked.

Sandra Bullock and Nicole Kidman are sisters who come from a long line of witches. Everything is fine and dandy except for the men they fall in love with die tragically. They try to break the curse to find love, and ward off an evil asshole ex. Same.

Blake Lively’s sister plays the witch in this epitome of the ’80s movie. There are song and dance breaks. SONG AND DANCE BREAKS. She also uses her powers to make her crush fall in love with her. Classic.

“It’s Sophie! Not Soapie!!!” We’ll just pretend that last movie with the imposter Marnie doesn’t exist. Oh and you can visit the real Halloweentown too. No magic school bus involved.

Before she was Lizzie McGuire, Hilary Duff played Casper’s witch best friend. She didn’t use her powers to make cute boys fall in love with her though. A young feminist icon. <3

While I am a big fan of “Scooby-Doo on Zombie Island,” a punk rock girl band of vampire/witches makes this one just a little better. Still know the words to The Hex Girls hit song, “Earth, Wind, Fire, And Air.”

Now where’s a Blockbuster when you need one?.