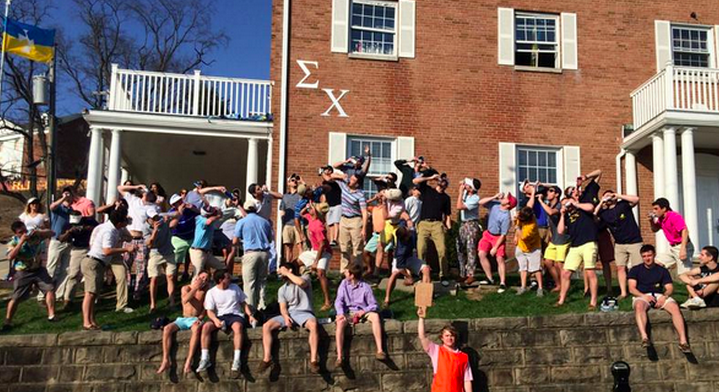 All it took was a cute boy, a moment’s glance, and some sort of interaction, and you were immediately obsessed (to the point that you planned your life together including the destination wedding, the 2.5 kids, and the dream house your younger self thought you could actually afford someday, and he considered a restraining order — lol, jk). The truth is, since we first started noticing the opposite sex, we’ve been victims of their antics. And while it’s not fair to judge people just off of their names, judging girls just so happens to be one of my favorite pastimes. And judging guys is even better. You might say it’s mean, but I say know what you’re getting into before you swipe right on a Jordan, ya feel?

1. Jake
If the name “Jake” doesn’t immediately bring you back to warm summer nights and drinking beer (or vodka Crystal Light, I’m not a monster) on the beach/at the park/whatever place you went to hook up in your hometown, you obviously spent too much time having respect for yourself. Jake was hot. Jake was tan. And Jake probably had plenty of other girls who also thought he was hot and tan.

2. Logan
Between being in love with you one second and forgetting to text you back for two days, Logans are the reason most of us have anxiety issues. And trust issues. And guy issues. It’s not that he’s a dick, it’s just that, well, actually, yeah. He’s kind of a dick. While we’d love to say we hate the drama that surrounds him, we all know that’s a total lie. It’s the drama, like the Logans, that keep us going.

3. Zachary
Zack, Zach, or Z-Man (gag me), as they’re sometimes called, tend to be the poster children for “generic white male.” Zach gets Mostly Bs, a few As, and the occasional C every semester. Zach is going into sales or business. Zach likes football, drinking beer with his bros, and Instagramming pictures of his car. Zach is basic. Hate him all you want, but if you take away the penis and replace football with the Kardashians, most of us are just like Zach. Scary, huh?

4. Josh
If his IQ was as big as his biceps, he’d be perfect. But let’s be real, part of the reason we love a good Josh is thanks to that adorable, vacant look in his eyes when you start using words with more than three syllables.

5. Ryan
I’d love to say “don’t fall for a Ryan,” but that’s pretty much impossible. Ryans are everywhere and yet when you snag one, he feels like the only person in the world. Still, that won’t stop him from making you regret that you fell for him in the first place. So, when you inevitably start loving a Ryan and then hating a Ryan, just know you’re not alone.

6. Gabe
With a heart of gold and the ability to always make you laugh, 10/10 times Gabes are a total catch. While they might not always be the sexiest guy in the room, they make up for it with their easy charm and impressive flirting skills. If you manage to lock a Gabe down, appreciate the fact that he’ll always love you and always be willing to take “just one more picture.”

7. Dwight
Dwights might seem like the perfect guys to blow off thanks to their hard-to-get-along-with personalities, painful senses of fashion, and overall unattractive appearances, but think again. Thanks to their long line of strong breeding, passion for their jobs, and black belts in martial arts, they might actually be somewhat of a catch. Oh, and don’t let the beet farm deter you. You know what they say: Beets can’t buy you happiness, but a really successful beet farm that rakes in the cash sure can.

8. Kyle
Whether he’s your best friend, your boyfriend, or just some guy in your class, everyone loves a Kyle. He’s usually the perfect combination of attractive, attentive, and just plain good. Who knew there weren’t terrible people in this world? Kyle did because he sees the good in everyone. Fucking weirdo.

9. Stephen
At first, Stephen/Stephan/Steve’s sensitive nature and deep, brooding looks made your knees weak and your willpower even weaker. But after a while, his constant need for intense conversations, moody music, and indie movies will make your eyes roll back too far inside your head and kill you. Save yourself and get out before you fall too hard for Steve and his “really profound films with French subtitles and dystopian societies that are a reflection of ourselves.” *shudders*

10. Adam
Friend zoning Adam is as much of a rite of passage in the girl world as going to prom or dying your hair dark after a breakup. He’s sweet. He’s attentive. And he tries just a *little* too hard. While you’ll push him away after he drunkenly tells you he loves you for the tenth time, you’ll regret it later when he snags himself a six-figure job and a killer Instagram following. Darn it.

11. Nate
If you ever see a Nate walking around, grab him, tie him up, and put him in your closet. Between their mythical good looks, pure heart, and muscles for days, Nates are the male form of a unicorn. If you can’t make him fall in love with you, hold him hostage until he develops Stockholm Syndrome. Or don’t. Whatever.

12. Justin
Maybe it’s painting, maybe it’s music, maybe it’s weird poetry on the internet. Whatever it is, Justin is an artist. And if the fact that he makes you look at/listen to/read his shitty work every waking moment isn’t bad enough, the fact that he’ll make negative dollars in the future should do it. It’s not that you don’t love a really creative guy. It’s just that Justin? He isn’t actually that good, especially when he practices “Smoke on the Water” forty-seven times at 3 a.m.

13. Austin
The fact that he’s named after an American city in the proudest state in the country speaks volumes about who Austin is. He drinks beer. He either drives a truck or wishes he drove a truck. And odds are he has an American flag hanging up somewhere in his apartment. Heaven help him.

14. Brad
Is Brad blonde? Probably. Is Brad buff? Most likely. Is it Brad Pitt? No, because fuck us, right? But still, two out of three isn’t bad.

15. Luke
When it comes to perfect guys, Lukes might just be at the top. The perfect mixture of fuckboy and nice, they’ll come over to help you with a project one night, and come over the next night. He’s down to let you copy his homework, but then insist that you both skip class so you can get high and eat everything in his apartment. He keeps you on your toes, he always leaves you guessing, but at the end of the day, he’ll be there for whatever you need.

17. Harry
I never met a Harry I didn’t like. And while, sure, I haven’t actually met a Harry IRL, all of the ones I know about are total straight shooters. From the prince to Charlotte’s lawyer husband to Potter, the most unattractive name in history has proven to be a sign of a keeper time and time again. Chances are, your Harry is going to be nice, rich, and really know how to use his wand, if you catch my drift (I mean he might be a secret wizard who saves the magical world, sickos).

18. Trevor
Life with a Trevor is never dull, thanks to the fact that he does everything he can to fight his basic name. Between his music choices, his clothing choices, and his life choices, he wants everything he does to ~make a statement.~ If you think you can break him of his emo bands or his weird graphic tees, think again. Still, it’s worth a shot, right?

19. Cody
While you won’t find a Cody you don’t like, there are plenty of Codys out there who won’t like you. Or at least, they won’t like you enough. Between their trust funds, their expensive hobbies, and their throng of blonde girls that always follow them around, you’ll be lucky if he remembers your name, in or out of bed.

20. Aidan
Aidan is nice. Aidan is handsome. Aidan is perfect for you. So, naturally, you’re going to fuck Aidan over for your shitty ex because despite what we say, most of us would take a cocky Mr. Big over a way-too-perfect Aidan any day. Aren’t we just the worst?.