What Your Basic Halloween Costume Says About You 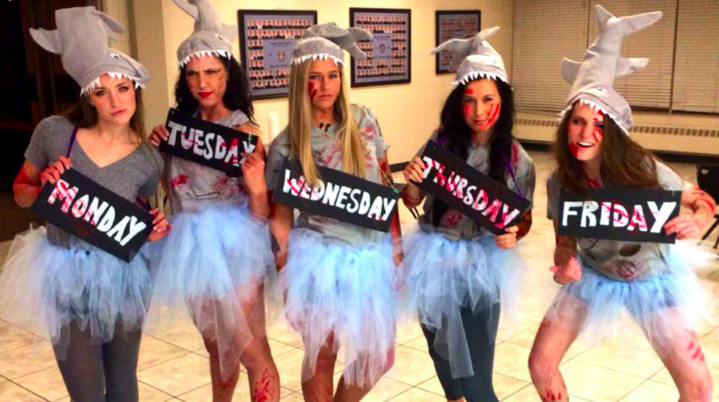 This Halloween literally every other girl will dress up as HQ. You don’t care. The point is, it’s the hottest costume this year, and by God, you’re going to be the hottest bitch in it. You don’t care that it’s basic. You don’t care that no matter where you go there will be at least five other girls dressed just like you. The only thing you care about is the fact that by the end of the night some poor sucker will be buying your Taco Bell and telling you how much of a babe you are — guaranteed.

It’s not so much that you’re basic, it’s just that you don’t really care. I mean, Halloween is great and all, but your goal isn’t to have the best costume. Your goal is to land the best guy. No, you won’t win a contest for being the most clever, but considering the hours you’ve put into the gym and the fact that you order a salad every. fucking. time, you might just win for hottest. Besides, isn’t Halloween the time to have your ego stroked?

If there’s a bitch in the Halloween community, it’s the witch. If your bitch face, your ability to make guys worship the ground you walk on, and your constant desire to be better than everyone else (not to mention the spells you’d like to put on your boyfriend’s ex) isn’t enough, the fact that you already own an abnormal amount of black hats should do the trick.

You’re already royalty considering the fact that you get people to do anything you want and your planner is not only filled with stickers and color coordinated philanthropy events PLUS dates with your Prince Charming. Or you know. Almost-Prince-Charming-But-He-Hasn’t-Made-It-Official-And-Sometimes-Doesn’t-Text-Me-Back-But-Whatever. The point is, you’re already a princess, but now you get to wear a crown.

You spend every waking second on social media. Instagram isn’t just a fun past time for you — it’s a lifestyle. You don’t need to keep up with the Kardashians, the Kardashians should keep up with you (but also, yes, you keep up with them. Duh). This Halloween you want everyone to know that you. know. everything. Whether you’ll dress up as Taylor Swift in snake form or a viral Youtube video. Your costume is sure to go viral in no time.

You’re not being ironic. You’re not even really dressing up. Considering that fact that you break hearts and make babies cry like it’s your job, you’re a devil through and through.

Let me guess, you bake in your spare time? You study and learn as you go and you don’t cram the night before? You do extra philanthropy hours just because you care about people? You don’t even need to get a costume, that halo is permanently attached. Bitch.

You suck the life and souls out of boys and girls you hate on the daily, so why should Halloween be any different? Sure, you’re a total smoke show, but you’re also cold, calculating, and attention seeking. Some people might see this as a problem, but when you’re the one winning all of the awards, getting the guy, and holding your liquor like a boss, they won’t be laughing.

It’s not so much that you want to *be* a Kardashian. It’s that you already sort of think you are one. Sure, you’ll be over the top with the giant ass and the see through clothes, but let’s be real — you’re only dressing up as them because you think you are them. Still, when those Instagram likes pour in, you’ll feel like one of them, at least for a night.

Let me guess — you have salt water in your veins? You always need some vitamin sea? Your favorite days are the ones spent on the beach? Few costumes are more basic than a merperson. But basic isn’t always bad. I mean, hello? Have you ever tried a PSL? That shit is delicious. Once you spend hours on your Pinterest-worthy makeup, weeks on your seashell bra, and months at the gym, you’ll be the life of the party and I’ll be the bitter bitch in the corner with my two legs and my jealousy. Well played.

Your one goal in life is to control everyone around you. From the girl in your chapter who never listen to you to the guy who doesn’t text you back — you want everyone to be at your beck and call. This costume is just a hidden statement that you’re a boss ass bitch, and it’s time everyone took note.

Ugh. I wish this didn’t have to be on here, but the amount of Hillarys and Trumps (not to mention Monicas) that will be running around at our Halloween parties will be absurd. The people who dress up as political figures either feel passionately about a candidate, are jackasses, or enjoy getting into loud, drunken political debates. All of which I’d like to avoid when I’m trying to throw up Fireball and candy corn by the end of the night.

One of the funniest costumes this year, being a ghost is sure to get some laughs. If you do this you have a few options: either you wear a sheet and cut two holes in it (a positive if you’re not a gym-gal), you go all out with insane makeup that just guarantees Instagram likes, or you just print out a shitton of unanswered texts and glue them all over yourself. Either way, you’re a cool girl who knows how to laugh at herself and is guaranteed to snag a few side eyes from jealous witches.

The Cast Of A TV Show

Just like dressing up as something trendy, this is sure to be a hit. Whether you’re Frank and Claire from “House of Cards”, Eleven from “Stanger Things” or literally anyone from “Game of Thrones” you’ll feel like a celebrity for a night while also showing everyone just how little of a social life you actually have. But hey, at least all of those hours you put into your Netflix habit will be worth it, right?

Something Clever That I Can’t Even Think Of

If there’s one way to make everyone hate you, this is it. Well done..