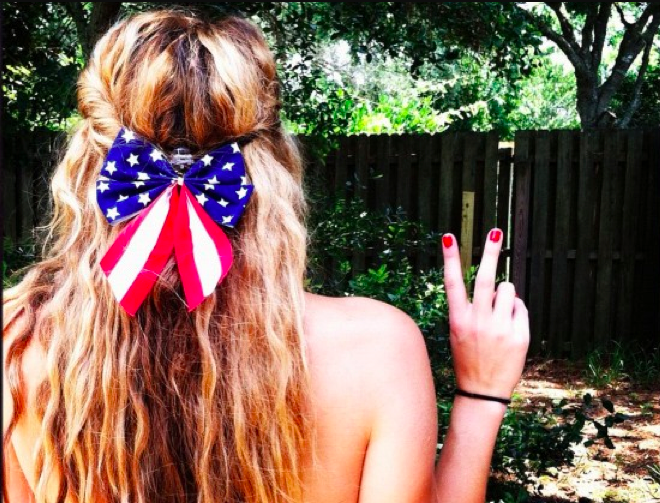 1. You’re going to wear your red, Sunny Co. bathing suit.
If you were one of us lucky ladies who actually got it.

2. Your nipple is going to pop out of your red, Sunny Co. bathing suit.
Because have you tried that thing on? There’s a zero percent chance you’re not going flash everyone if you attempt to wear it.

3. Or if you’re not wearing a Sunny Co. bathing suit, you’re going to wear an American flag bikini that you’ll regret the second you hit your third beer.
That’s why high waisted shorts were invented, right? And garbage bags.

4. “Red, white & booze” will be your go-to Instagram caption.
You know, just something cute and not at all basic.

5. Or if you’re feeling really wild, you’ll use “Land of the free, home of the rage.”
Who needs to be brave when you can rage, amiright?

6. No matter how much you insist that you’ll take it easy because you have work/class/internship on Wednesday, you’re going to be dancing on the table by 3 p.m.
You do it for all of your friends’ birthdays. America is no exception.

7. On that note, you’re going to dance on the table even though you’re at a lowkey BBQ.
It’s up to you and you alone to turn the event into one everyone will regret in the morning.

8. Even if family is there.
“Come on, grandma! There’s plenty of room for you to dance up here next to me!”

9. You’re going to pose with the American flag.
America should understand. You’re doing it for the gram after all.

10. And let’s be real. You’re going to forget about it and set it down and someone is going to spill guac all over it.
Because it’s not a party unless you do something illegal in the eyes of society.

11. Tequila. You’re going to drink tequila.
You know. The drink of freshman American college students who haven’t decided that they hate tequila yet.

12. And this is after you shotgun a beer, do a keg stand, and have several Jello shots.
It’s what the founders would have wanted. America’s founders. Not necessarily your chapter’s founders.

13. You manage to make a 15-minute Snapchat story.
Which is something no one knew was possible and everyone will hate you for.

14. And most of it is just you drunkenly singing to Luke Bryan.
Because nothing says “America” like slurring the words to Country Girl while screaming at your phone.

15. You’re going to drunk text your ex who you watched fireworks with last year.
Because this time last year he said he would always love you. And guess what? He’s a LIAR!!!!!

16. And you’re going to invite him to watch the fireworks with you this year and maybe spend forever together?
BECAUSE LAST YEAR YOU WERE SO IN LOVE AND WHY DID HE LEAVE YOU?!

17. Then you’re going to call him 17 times until he answers.
His phone must just be locked in some sort of safe. Or he’s dead. So, you’ll just have to call him until he comes back to life.

18. Only to have him confirm that he *still* has a girlfriend.
You know. One that isn’t you, apparently.

19. So, you’ll then pull up her Instagram and ask random people at the party if they think she’s prettier than you.
She’s not though, right? I mean, obviously. Right?

20. Crying. You’re going to do a lot of crying.
Good thing you’re wearing waterproof mascara because there’s a pool, right?

21. You don’t  wear waterproof mascara because you assumed you wouldn’t go in the pool.
So you’re forced to wash an hour’s worth of work off and sport a naked face when you inevitably get pushed in the water.

22. And you forget to bring a swimsuit coverup, so you’ll regret the three hotdogs, two cupcakes, and entire bag of chips you consume when you’re blackout.
There’s nothing like arriving to a party looking hot and leaving looking…well…not.

24. Don’t forget the pictures! All of the ones you’re tagged in after you ate a week’s worth of calories.
“Everyone agrees — we either Facetune everyone in every photo or we just smash our phones and break up our friendships now.”

25. And don’t forget the alcohol! 10/10 you’re going to throw up.
It wouldn’t be Independence Day if you didn’t upchuck every red, white, and blue drink you consumed over the past four days all over your Uber.

26. You’ll make some uninterested guy spend 27 minutes trying to get a good picture of you.
“Wait. Can you do it again but like, better?”

27. Only to realize he fucking sucks at taking pictures so you have to ask his hotter friend to help you out.
“Make me look hot enough in this picture to where you’d want to hook up with me and then we casually date, fall in love, get married, have 2.5 kids, and live happily ever after. Lol, I mean can you take one up and down?”

27. Will you make out with someone you’re not supposed to make out with? Yes. Obviously.
Guy. Girl. Friend’s ex-boyfriend. Ex-boyfriend’s friend. Five vodkas in, it doesn’t even matter.

28. No matter which side of the Taylor vs. Katy battle you’re on, you’ll belt out all of the words to Firework. On stage.
Don’t mind the voice cracks, the pauses for another sip, and the Snapchatting. Just enjoy the performance everyone!

29. You’ll call the girl who beats you in flip cup a bitch to her face.
See YOU Next Tuesday, for real.

30. For some reason, you’ll decide to get into a political debate.
And you’ll bring up the fact that you’ve had a little crush on Obama for like, everrrr.

31. And it will quickly become apparent that you don’t know much, if anything, about politics.
What do you mean watching SNL Youtube clips doesn’t count?

32. Weighing yourself the next morning is going to be fun.
Maybe you somehow got nine months pregnant overnight?

33. So will waking up to the annual 5th of July hangover.
It’s not America if we don’t half-heartedly go about our days the next morning like we didn’t spend the better half of the 4th with our face in the toilet and our phones on airplane mode..