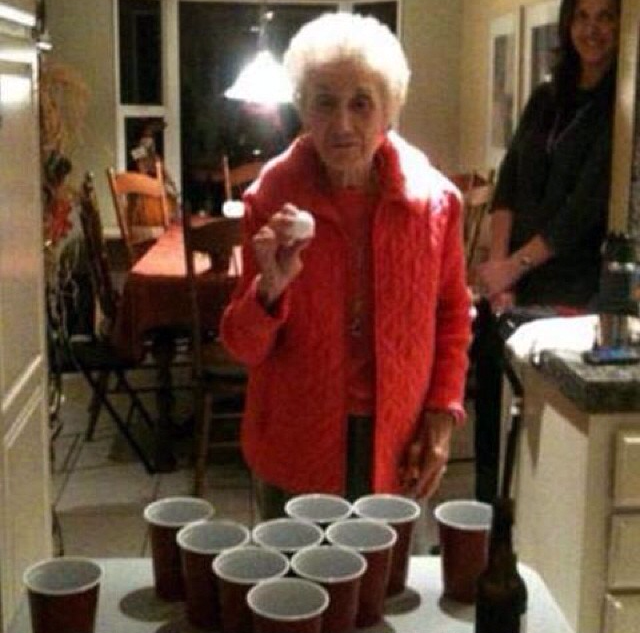 1. Dating
Dating back in my grandparents’ era meant something completely different than what your common college-aged female is used to. Men would “court” women they considered to be of marriageable age by taking them out on chaperoned dates to the nearest sock hop or diner, where, if the date went well, they would end the night by non-sexually sharing a milkshake, with their knees slightly touching under the table. So sensual.

It’s a little different these days. Guys don’t know what a date is. Contrary to what men believe, Netflix and hanging out in his dorm room don’t count as a date. Not even close. Back then, the whole purpose of dating was to find someone to marry. Dating for this generation is sleeping around, and yes, you might actually date the person you sleep with, but I think for most of us it’s usually just casual sex. Nothing wrong with that. My grandmother’s goal of dating was to get married, whereas my best friend’s goal of “dating” is to sleep with a guy in every fraternity before she graduates. I just want someone to pay for my drinks when we go out. It’s all one in the same, really.

2. Career
Being an independent, career-driven woman is soooo hot right now, but it wasn’t always. Women with successful careers were unheard of 60 years ago, and even if they had a successful career, they would quit before they turned 30 to settle down and get married before it became too late to pop out a couple kids. Wage gap? LOL. Try wage canyon. A woman in those days worked because she was ugly and no one wanted to marry her. The day a man came along and told her he would knock her up a bunch of times and provide for her, she gave up anything resembling a career. She had already hit the jackpot.

Lucky bitches. Kidding. I totally want a career and to be able to make my own money and all that jazz. But if a nice man came along and told me he wanted to marry me and if I accepted I never had to work a day in my life again, I wouldn’t say yes, but I would definitely think about it for a second. They don’t call it work for nothing. Live a life of luxury with my husband bringing home the bacon or slave away and go home to my cat and a bunch of empty Chinese containers? Tough choice.

3. Marriage
Getting married in my grandmother’s era was pretty much the dream. It was the height of any woman’s life, and I thought it was because women were finally allowed to have sex, but after a really awkward conversation with my own grandmother, I came to realize that’s actually the most dreaded part of the entire night. But like, I get it. My first time was weird and painful and I didn’t know what I was doing, and neither did he.

These days, I mock anyone who gets married (or even engaged) before the age of 21. Nothing you say could make me not screenshot your proposal and your tiny ring (because he’s young and could only afford something from a pawn shop) and send it to all my friends in a group message while we all take bets on how long your marriage will last and whether or not you only got engaged because you got pregnant. Sorry, not sorry, it’s happening. And don’t even get me started on your stupid engagement photos. It’s not because I don’t think you’re in love — because I’m sure you are — it’s because I don’t understand what the rush is, unless you really are pregnant. In my grandmother’s day, 21 was actually kind of old to be getting married. But now it’s way, way too young. We don’t need to depend on men anymore. You do know that, right? You’re allowed to be your own person and figure out what you want out of life. Marriage was the only way to succeed in life back then, but that’s not the case today.

4. Sex
Sex back then had one purpose: making babies. There was no pleasure in it for the woman. It was a chore more than anything, and once the mediocre sex produced enough offspring, that was it. No recreational whoopie, because then you just end up with more mouths to feed. Sex wasn’t sexy. It was practical.

Thank God that’s over. Give me all the orgasms!

5. Children
My grandmother had her first child nine months and a few days after her wedding, a fact she has had to defend since the day my uncle was born. She didn’t have sex before marriage, she just “got lucky.” These days, getting pregnant right after you lose your virginity is how you get your own TV show. She went on to have a total of four boys, and from the horror stories she’s told me, it was not an easy pregnancy, delivery, or childhood. Raising my dad and uncles took more patience than waiting for the Victoria’s Secret semi-annual sale to come around. They were maniacs who only stopped whatever ruckus they were causing when my grandfather laid a hand on them. Ah, corporal punishment. How I miss those days.

The idea of me having a child is both sickening and exciting to me. It’s sickening because last night I had cheese with my wine, and to me, that counts as dinner. But babies need to eat more than cheese and wine. There’s no way I can handle that kind of responsibility right now. Biologically, 60 years ago wasn’t that long ago considering how long humans have been on this Earth, so every time I see a baby it feels like my ovaries kick into overdrive and I have a sudden urge to be a mother. That urge quickly dissipates when I think about having to be sober for nine months. Because I’m young and irresponsible and single and a million other things that a mother should not be, keeping my womb childless is probably the best idea. Not just for me, but for society at large.

I love my grandmother, but I’m so glad I live in a time where my independent life doesn’t have to be over at 18. All the good things happen in your 20s..