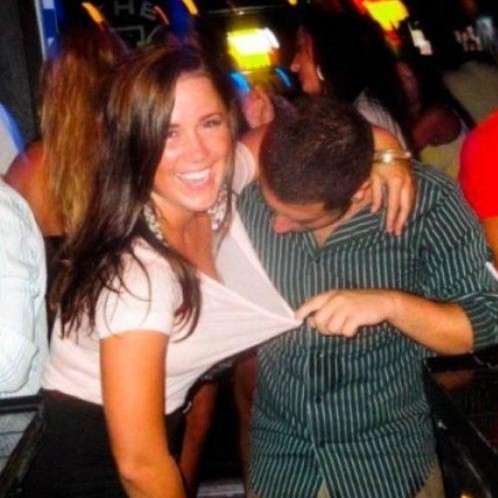 Generally, I don’t like to waste my time with guys who aren’t super aggressive. Probably because I have a big fear of ending up with someone who’s…a bitch basically, and if he can’t go for what he wants, how is he ever supposed to stick up for someone (like me) or more importantly…our children. That’s right, my wife and mother instinct is always on high. That’s why they call me crazy. One of the reasons anyway. However, I’d say I’m a little girl with a big personality…not everyone can handle me or be quite the hunk-o-man I want him to be. In these cases, rather than get frustrated, I enjoy playing the role as the seductress. It’s a little bit fun knowing that you’re having the kind of intimidation factor on this shy good boy’s penis as fifth year seniors did on his self-esteem when he was a pledge. So the following are my favorite super obvious “kiss me” moves that always seem to make it easy to find the balls loverboy couldn’t find on his own.

This is my absolute favorite move because not every girl is confident enough to do it, and many who are fail miserably. A casual hand on a guy’s upper thigh is the best non-slutty way to make him very aware of his penis, and very aware of his desire for you to touch it. The key is…it has to be subtle. You shouldn’t be like…rubbing his groin or something feeling around for wood. Just very briefly in the middle of conversation if you’re sitting next to each other…hand down as you’re making a point, and right back up. I have that game “nervous” in my head every time. The one you played on the bus for field trips…how close you could get to someone’s unmentionables before you were getting yelled at by a chaperone, accidentally touching a penis and getting that “well now what” feeling, or most commonly chickening out and having to quit. I never got nervous. (I always got nervous.) Much like your field trip days, the rule remains: do NOT touch it. The general vicinity is enough to ensure that if he wasn’t already thinking about ravishing you…he is now. End your night with a two minute make-out, and he’ll be in love with you. Or at least his little man will be.

This is more an act performed with a shy guy during a cuddle sesh. Personally…I’m not a big fan of cuddling. I have that constant feeling like I’m being suffocated…get nervous about waking him up if I take too deep of a breath or God forbid have to pee, and of course there’s that… “what the fuck do I do with my other arm” dilemma. Point is…I’m not a cuddler. Most guys aren’t either, but there are some of them who genuinely enjoy it, or are nervous you don’t want to do a thing…or…I don’t know, are pussies. Something like that. How to stop the cuddle sesh? Or at least just tease the shit out of him if that’s more your style….the BUTT STRETCH. It’s not really so much of a stretch. More like a push. Very simple: Your butt, his man place, and pressure. It’s definitely the least subtle thing ever, but in my head when I’m doing it I think he really thinks I’m “accidentally” feeling around for a boner with my ass. Accident or not…you are technically looking for a boner, and as it would turn out, it’s not very difficult to find. A MO sesh will soon commence as everything about you (except for like…you) is screaming JUST DO SOMETHING ALREADY. He’ll hear it loud and clear.

The “Walk Me Home”

The problem with asking a guy to walk you home…is that, it’s not 100% always because you want to hook up with him. I don’t like to walk by myself for fear of like…ninjas attacking or a swarm of men wearing ski masks lurking in the bushes ready to pounce and force Rohypnol down my unsuspecting throat. My friends and I are pretty good about making sure we have everyone before we leave, but some girls (myself included) are chronic wanderers. Last you saw her, she was chatting up Lawrence Edward Fitzgerald IV and now you see him and he tells you she went to the bathroom, or ran into….someone else and never came back. In the case of getting lost on the journey to the water closet, I’ll normally ask some rando for a walk home and abruptly end with a “Welp. Thanks so much.” then close the door and wait to be shamed by my estranged roommates. But in the case where I didn’t stray from Mr. Somebody Important, and we haven’t engaged in a sloppy dance floor make out, but I want to…I’ll ask him to walk me home because “it’s really far…I don’t want to go alone.” He’ll obviously recognize this cue, and instead of coming home to me rocking in fetal position with an “OMG I don’t even know what happened tonight” expression, my roommates will come home to see man feet sticking off the end of my bed. Much better.

Best reserved for the end of a date, but can easily be pulled the morning after a shack if you’re interested in a round two or a goodbye kiss on the car ride home. Once you’re preparing to depart, not every guy knows what you’re after. In both of these situations, you’re sober. Or at least way more sober than you would be at 2AM and despite popular belief, some guys get nervous in these situations. Sober kissing (or sober more-than-just-kissing) is awkward unless you’re comfortable with the guy. It’s not your job to initiate…just to give him the green light. That awkward, “soooo…….” is usually indication enough that you want him to make a move. Otherwise you’d just leave. If you’re lingering, it’s because you want something, and it’s probably not conversation about his roommate’s intramural game tomorrow night. I HATE guys that can’t pick up on this. HATE.

It works in every situation when you want to be kissed, and everyone has their own. It’s hard to put it into words. You might bite your lip…I might judge you for that, but the fact of the matter is, it’s working for you. I think all I do is smile and open my eyes really big. I soberly imagine how stupid I must look, because every guy actually looks pretty stupid when he’s giving his…I’ve even tried to take pictures to see what it looks like, much like I’ve tried to check out my boobs in a hand-held to see what they look like when I’m laying down…but it’s hard to authenticate “the look” when I’m not being authentic, and they all just end up with me cheesing and looking like every single one of my profile pictures (the boob thing works though, try it). Either way, I’ve never given my “look” to a boy who hasn’t kissed me after I did it. So it serves its purpose, and in those 10 seconds of eye contact if you’re not overwhelmed by awkwardness (translation: you DON’T want to hook up) you are telepathically telling him “Yes please, I would like you to make out with me now” and he always goes for it. Unless you’re like incredibly awkward and unsexy, in which case I imagine he’ll look away and tell you he has somewhere to be.

So, for those of you who somehow have made it this far in life and remained ignorant to these incredibly obvious cues, you’re welcome. And practice makes perfect. To everyone else…Happy MO’ing. As for me…I’ve now explicitly stated most of the ways I try to let you know I’d like to be in your arms, so if any boy I have a modicum of interest in reads this and doesn’t proceed accordingly, I’ll be off removing my brains through my nose. Toodles.