5 Questions With Ann Pirvu: What It Was Like To Be The Queen B In Total Frat Movie 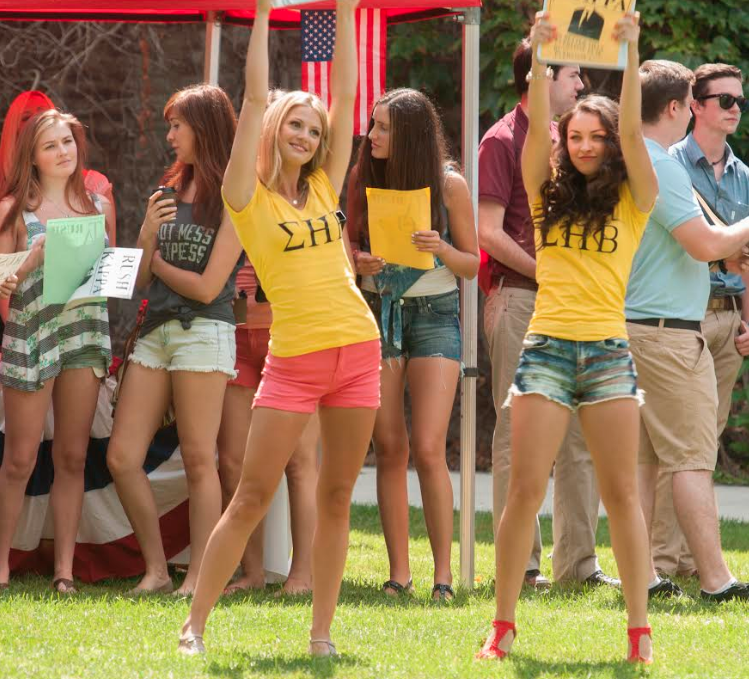 As is true with any frat movie, or any high school/college movie in general, Total Frat Movie comes equipped with a queen bee, which I’m happy to announce is the brunette for once. Ann Pirvu sat down with us to answer a few questions about life, love, and what it’s like to be the mean girl. And to make out with Nick Bateman.

ANN (BECCA): I’m a big team player, in pretty much any aspect of life, but the extent of my knowledge of the fraternity/sorority lifestyle was mostly colored by movies like Animal House, Old School, Sorority Wars or Neighbors. Working on TFM has been a very…. educational experience. [It was] ridiculous fun, with a lot of heart, and friends I’ll cherish long term. It was wonderful to get fully immersed in the rollercoaster of frat life, even if my character was a total bitch…

2. What is the craziest thing you’ve done to get a guy’s attention?

ANN: Direct eye contact [laughs]. I’m kidding, that sounded so douchey but I’m actually pretty lowkey when it comes to relationships. I value genuine, honest, straightforward human beings. And I come across a lot of interesting people all the time in what I do. I find that if you feel compelled to do something crazy, it’s usually not the best match for you. At the same time, when I’m in the company of someone I’m interested in, I tend to make a whack of inappropriate jokes. I don’t know why…. sometimes they don’t even make much sense. But it’s always funny! I’m a weirdo, there you have it.

3. Tell us the best story that happened on set of Total Frat Movie.

ANN: Alex House (Billy) is one of the funniest, most genuinely kind and caring human beings you’ll ever come across. His character’s interactions with mine reminded me a lot of the little boy in the school playground who really likes a girl, but can only express it in aggressive, misguided ways! Two of the funniest things I remember during filming revolved around that concept. There’s an epic scene at the end of the movie where Becca and Billy seemingly get close, after he’s spent the whole time just throwing drinks at my chest. He comes in for a hug, but dumps this drink on me one last time. And I’m supposed to slap him and run off crying. Well., on the first take we do it and I’ve got this absolutely shattered look of betrayal on my face. And Alex actually startles, stops the scene and yells at everyone to get me a towel – right away! It was adorable. I was laughing so hard because I was perfectly fine. “We’re acting, Alex, remember?!” He was devastated for doing that to me. It was hilarious!

4. How did you prepare to play this role in the film? Do you share any similarities to your character?

ANN: Playing Becca Henley was a delicious experience. I’ve never played a Queen B(itch) before. It was very cool to unleash my inner mean girl. I think I actually watched “Mean Girls” a few times before we started filming, just to get my bitchy on. My aim was to craft a likable villain; someone you’d love to hate but deep down you know she’s actually very insecure and struggling to keep her place at the top of the pyramid. I loved her wild, brazen, rebellious nature – qualities I have no problems relating to personally. Plus, having Nick Bateman as my boy toy wasn’t too bad either.

ANN: Epic. I always go for epic. I’ve always wanted to go to Paris. The French are well known for… enjoying life 😉 It would likely be somewhere like the top of the Eiffel Tower (it’s all about that view – I don’t even know if that’s possible, but you get the point. [I love places] with loads of entertainment! Lots of creative types in attendance, so anything goes. [Like} dancing! Live music all night long. Maybe a jamming sesh that runs until the sun comes up..