7 Types Of Girls In Every Sorority 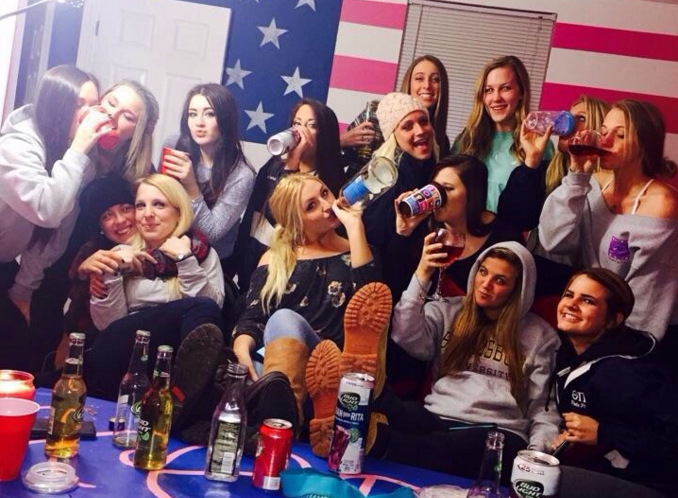 This little lassie gets amazing grades, is active among her philanthropy, loves rush season, holds a position such as scholarship chair, and is the sweetheart of the chapter. She’s also a complete freak in the sheets. Sure, she comes off as a goody-goody who flosses every night and goes to bed early. Nobody expects her to be riding a different guy every weekend in reverse cowgirl while everyone else is at bars or parties. This chick doesn’t drink much, but she will devour one or eight glasses of Chardonnay when she needs to take a break from being naughty with the teaching assistant for her good grades. She’s learned a lot in college, mentally and physically.

Homegirl dominates in every single sport. This chick was a badass athlete in high school and still is to this day. She loves intramurals as much as Kanye loves himself. The gym is basically her second home and she actually knows how to use that one lifting machine that makes you look like a spider trying to bulk up for summer. She’s crazy about sports bras, light beer, friendzoning boys, vulgar jokes, Nike shorts, and sports bars. Guys love her chill persona. And by hanging with them every day, she’s learned to finish shotgunning a Coors Light before everyone else. She’s a guys’ girl, but definitely not a slut as so many jealous bitches assume. Sorry she has a nice ass and can still chill with the bros without smashing every one of them.

Girls gossip. We all do it. It’s in our nature. Some do it more than others. But only one can be the actual queen of gossiping. People go to this sister as soon as they suspect some scandal is going down. And she has all of the dirt. Even if she doesn’t know all of the details, she has too big an ego to disappoint people so she just makes things up. Deep down, she’s one of the most insecure girls out there. This bitch doesn’t have any true friends because nobody actually trusts her; they just use her for news and opinions. She’s constantly making new Groupme’s because she doesn’t want to look like a total vagina once she decides to talk poorly of other people in a different group message. If there’s one thing that’s for sure, it’s that the Gossip Queen is an instigator who is very passionate about making the lives of her frenemies very uncomfortable, and she’s extremely good at it.

That One Strange Chick

She’s just sort of there. Nobody really understands why she rushed. Did her mom make her do it? Did she know somebody who has dropped out by now? What’s the deal with her? This girl doesn’t talk to many other sisters, and that’s why so many people in the chapter are quick to judge her. Sure, she looks like a sad wardrobe lady behind the set of Portlandia dressed her. And yeah, people are scared of what’s going to happen when PNMs meet her during recruitment. But once you actually do talk to her, you’ll find out she’s freakishly kind and there is more to her than Call of Duty and hipster photography.

Ahh. The party girl. The liability issue. The shit show, if you will. Whatever you call her, every chapter has one that stands out above the rest. She absorbs unholy amounts of booze and gets rowdier than any other female in the Greek community. When she struts into the party, her mission isn’t to locate the hottest guys. It’s more of a challenge to find someone that she hasn’t swapped spit with who she wouldn’t mind settling for that night. Going to class sporting a look that says she went to hell and back the previous night is a common thing for her by now. This woman is a generally decent human being, but when you piss her off, she does not give a shit how big of a raucous she causes, which is why most people try to stay on good terms with her. The PR Risk has gone to more exec hearings than she has gone to chapter meetings. Proceed with caution if she asks you to go out with her any day or night of the week.

The mom of the chapter is the one who everyone loves to drunk dial, and that’s usually because they need a ride home from their shacking resort before their one-night loverboy wakes up. She is an actual angel from heaven. Normally she stays in watching Netflix in sweatpants with her boyfriend on the weekends. However, whenever this woman does go out and falls into the temptation of binge drinking, she gets hammered so quickly that everyone else is jealous of her. Whether she is sober or shit faced, this girl never fails to make people roll over with laughter when she tries to dance. It’s like watching Emma Watson trying to do dance moves out of a 50 Cent music video. The mother goes home a lot, but everyone genuinely loves her and is thankful when she stays in town because she’s such a life saver..

Kellie, spelled with an "ie," practically resides at Starbucks even though they have yet to spell her name correctly. She's obsessed with the color pink, Elle Woods, and Bitmoji's. Her biggest accomplishment is breaking the record within her sorority for how many standards hearings she has had without getting kicked out. She spends her free time trying to stay tan (i.e. sunburnt) and stalking people on social media.