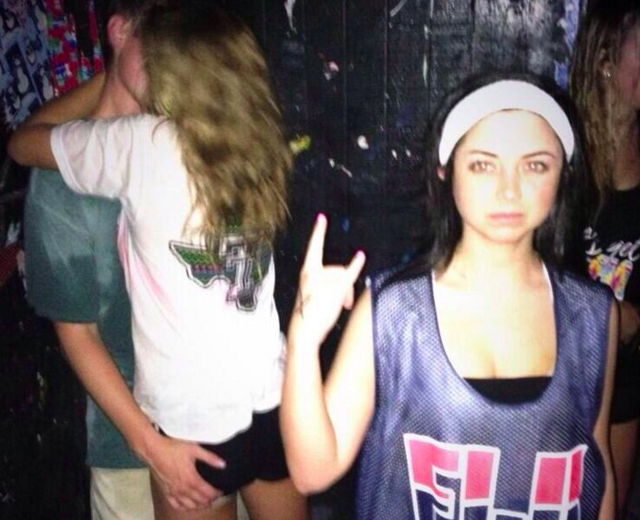 Summer brings forth a lot of things. Deep tans that are sure to give you wrinkle lines and possibly the big C in the future. Plenty of time to relax, unwind, and recharge. And skanky girls who are trying to wiggle their way into your almost-boyfriend’s heart. It’s the risk you take when you meet someone at school. If they’re not from your hometown (and let’s be real, odds are they aren’t. That’s why you went away in the first place) then you have to accept that for a good three months, he’s going to be out of your watch. But, never fear! Together, we can make sure that the guy you spend every 2-11 a.m. with Thursday-Sunday doesn’t forget about you this summer.

Nothing says “I miss you and I hope you’re thinking about me” like strategically sent Snapchats. Going out to a bar? Snapchat him. Wearing a low-cut shirt? Snapchat him. Stayed in and decided to spend two hours on your makeup just so you could send him a selfie? Snapchat him. The more times he sees your face (or whatever it is you choose to send him), the more likely you become ingrained in his brain. That’s just science.

There’s something oh-so-romantic about a handwritten letter. You can get emotional and cry, and your tears will stain the page. You can rub your neck all over it so he can smell your perfume. And you can even send him a lock of your hair and a teeny tiny vile of blood if you’re really trying to impress him. It’s not so much *what* you say in those letters that are important. It’s how much you say. Ramble on about your day-to-day life, and leave no details spared. He’ll want to feel like he’s with you 24/7. Be sure to complain about the girl who cut you off at the light and the tone your mom used when she told you to stop stealing her shoes. Make these as cute or creepy as you’d like, and get ready for a Notebook-style ending (the happily ever after. Not the death).

Before he leaves for home, approach the topic of visiting each other over the summer. Do this in bed post-orgasm. Immediately throw the dates in your calendar and/or book flights then and there. That way, if he changes his mind, he’ll feel like an asshole since you already got a $500 round trip ticket. Sure, it’s a little twisted, but so is your love, right?

4. Watch Him From Afar

I don’t think I need to say this because you’d do this even if I didn’t tell you. Hell, you’d do this even if I told you not to. Up the number of times you stalk his social media accounts and match any questionable behavior with questionable behavior of your own. He sends you a Snapchat from a bar? Send him a Snapchat of you *on* a bar. He Instagrams a picture with a girl? Instagram a picture with your ex. He friends some new girl on Facebook? Joke’s on him because you made that fake bitch’s profile and you’re going to catfish the shit out of him. I mean, just like, friend request some other guy? Idk.

Nothing says “I’m totally rational and respect your space” like a surprise visit to his hometown. I’d say look up his address but that’s a joke. You know his address. You’ve known his address since you two first made eye-contact. If you’d like to be more dignified, drop his mom a Facebook request (moms love Facebook requests) and send her a DM. Mention that you two are seeing each other and you’d love to stop by to surprise him and meet the family. Is there a time that works for her? Is there anything you can bring? Is it okay if you call her “mom?” When the big day arrives, rejoice at the look on his face when he realizes he’s stuck with you for as long as his mom remembers your name.

6. Tattoo Your Name On Him

Whether you choose to take him to a tattoo parlor when he’s drunk out of his mind, or if you decide to just do it yourself with a little help from Google, branding your man is the perfect way to make sure he remembers you. No girl is going to go home with him once she sees “Kayla’s Guy” written in cursive on his bicep. Plus, it would be much easier for him (and his ego) to just marry you instead of admitting that he was tricked into the situation and that he isn’t, in fact, your guy.

7. Watch Him From Up Close

While surprise or planned visits are great, they won’t exactly help you to ensure that he’s not screwing you over (by screwing someone else) while you’re apart. Social media can only say so much, and even you know that Snapchats are created to trick people. Consider renting a house or Airbnb for the duration of the summer about half a mile away from him. Spend your time watching him go to and from his house, keeping track of who he’s with and what he’s doing. If he starts getting too friendly with someone, call him endlessly until he picks up. If you want to kick it up a notch, slip pictures of yourself into his window at night, so he knows that you’re always watching. Waiting. Missing him.

Honestly, I think we can all agree, this is the move. Why let him go home anyway? Sure, he needs to see his family and friends and blah blah blah. But, what? Are they more important than you? Nonsense. Invest in some strong chains, a food bowl, and one of those hamster water dispensers, and set up a nice little nook for him in your closet. If you want to be really nice, throw a TV and some sort of ball in there so he has fun. When he’s asleep one night, just drag him to his new home and voila! You’ll know where he is all summer, and there’s no way he’ll forget about you! He’ll thank you for taking the initiative in the relationship, and he’ll be relieved that he won’t have to worry about not calling or contacting you enough while you’re apart for the season. Trust me, it’ll be a relief for everyone involved. Just be sure to walk him twice a day, and you’re looking at the perfect summer!

First comes holding the guy you like hostage, then comes marriage, right?.