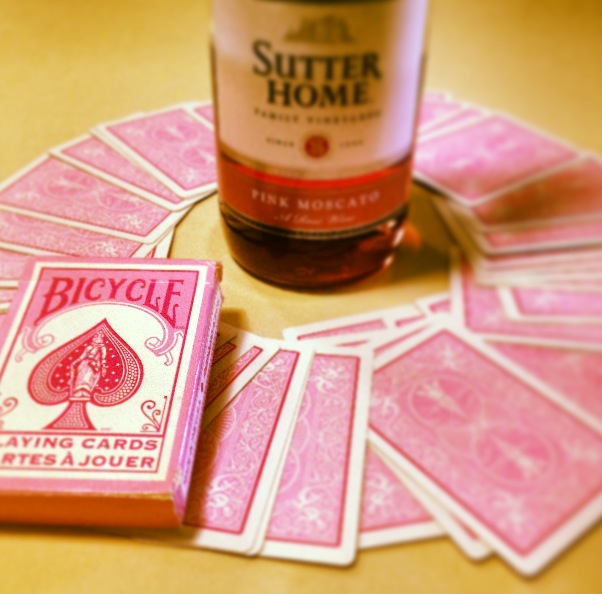 I’ve always been a huge fan of drinking games, particularly the ones that don’t require a whole lot of skill. I’m literally heinous at beer pong, well past the point where it’s slightly funny, and maybe a cute-ish way to allow your handsome partner to assert his masculinity. It’s a drag to have me as a partner, a bore to play against me, and an embarrassment to be me and display my horrendous skills, or lack thereof. I much prefer games that don’t require me to exert a whole ton of energy, or make it clear that I’m normally only used to handling balls once a game is over. While I can get rowdy to a game of thumper, or casually drink every time a Real Housewife says the word “classy,” my favorite drinking games have always been the ones where I’m gathered around a table with a deck of cards, a bunch of people, and a lot of alcohol. Why? Because they’re fun, easy, interactive, flirty, and provide 52 opportunities to get wasted. Plus, my deck is pink (obviously), for breast cancer. I’m really philanthropic. There are probably hundreds of card games, all of which can get you to your ultimate destination, Blackout City. “Fuck the Dealer,” and “Up the River, Down the River” are among my favorites, but I need to pay homage to the game we all learned sophomore year of high school when we were invited to a senior party by that hot, older guy in our math class, resulting in a month-long grounding because our moms called our best friends’ moms and realized we were at neither house: King’s Cup. No matter how many times I’ve played it, each card invokes the same happy, soon-to-be non-memories time after time.

I hate drawing a 2, because I just feel it’s so much pressure. Even as I near blackout, I assume that everyone is reading into the “you” I pick to take a sip just as much as I am. The only time a “you” comes easily is if you’re celebrating a birthday, in which case the choice is obvious. Otherwise, if you pick a girl, you’re sending subliminal passive aggressive hate messages, and if you pick a boy, you’re automatically being way too forward and look like a slut. Those are the ONLY things it can mean, even though no one will notice who you picked besides you. The only way to avoid the scrutiny nobody has put you under for your two-you choice is with an exaggerated “ummmmm” and just point at whoever is sitting next to you. Life’s hard.

Sorry, Three Dog Night, but three is actually the loneliest number. Normally I like attention, but King’s is so interactive, that drawing a three just tends to be a let-down. Everyone’s excited, anticipating what you’re going to draw, and the “me” card is so anti-climactic. The collective disappointment in the room leads to awkward judgment as everyone stares you down as you drink your beverage, ruining their opportunities to take a swig this round.

Some people say four is for whores, but I’m really classy, so I would never drink liquor that comes in a plastic bottle, costs $14.99 for a handle, and needs to be flavored to distract from the fact that it might actually be rubbing alcohol, if I was instructed to do so by a card that pointed out my sexually liberal attitude. We’ve always had to touch the floor for four, which is way better, because competition is fun, and laughing at the oblivious asshole who didn’t see the card drawn never gets old.

I enjoy watching men interact with each other, even if it’s just for a 15 second period when a playing card dictates they drink together. They know that we’re just sitting there watching them in that moment, too, and I feel like they purposely try to exert masculinity in something so simple as taking a sip of beer. Nothing gets me going like a guy acknowledging that he does, in fact, have a penis.

I don’t know why, but it is always an extravagant proclamation of womanhood when a 6 is drawn, and the girls present are required to drink. Every single time, it’s like some sort of bonding experience, that we’re forced to cheer, and woo, and clink glasses as if we’d banded together for this sip of beer alternative. I think it’s a horribly annoying habit, but when the booze is flowing, I can’t help myself from letting the obligatory “Laaaadieeeess!” spew from my lips, undoubtedly annoying the guys in the room.

Much like touching the floor, your competitive and quick reflexes kick in when you raise your hand to reach for heaven, and the last person to do so has to drink. The difference being sevens can get dangerous. In your aggressive efforts to throw your hands up in a matter that asserts as much dominance as possible using a gesture that small children “Ooh! Ooh! Me, me, me!” with in elementary school, I’ve seen drinks spilled, hair pulled, and one very regrettable black eye. That bitch had to drink double for ruining everyone’s fun.

Before my liver had fully begun developing, picking a date meant you chose one other person, to drink with for the round. As I got older, the rule changed from picking a date, to picking a mate, meaning any time one of you drank for the remainder of the game, the other had to as well, and of course, if you screwed it up, you had to drink double. Not only does this set the stage for some serious debauchery, but it’s also one of the best flirtation devices. You and your admirer/admired will be forced to pay attention to one another for the rest of the night, (or at least the next 30 minutes). If a guy asks you to be his mate in King’s, it’s reasonable to expect that the next step in your relationship is marriage. Note: this has worked for me exactly 0% of the time.

Some brave souls try to do some Dr. Seuss shit and use actual sentences and form some sort of semi-cohesive poem with their bust-a-rhyme sequence, but I say if all of your faculties are still intact, enough to allow you to attempt to be literarily creative, you aren’t drinking enough. I prefer to take the lazier route and just blurt out the first potentially rhyming word that I manage to pull from my lexicon. Also, don’t be that douchebag that starts it off with “orange.” Nobody likes that guy.

Normally played with 10 fingers, a three-fingered abridged version of the scandalous, TMI confessional game is played whenever a ten is drawn. I have a love/hate relationship with Never Have I Ever. If you’re playing with a group of people who don’t give a shit, it can be a hilarious display of “we know how to party” style one-upmanship and call-outs, but then there are those girls who can really make it dreadful. I find it maddening when they’re all “Never Have I Ever decided against shaving so I wouldn’t hook up with someone, eventually changing my mind, and doing so in the bathroom as quickly as possible, hoping he neither passes out before I get back, nor questions what the hell I was doing in there for so long.” Bitch, you did that last weekend. Or maybe that was me. Either way, you suck.

As far as “trivia,” or generally “knowing things that don’t directly pertain to me” go, I’m a far cry from an expert. I don’t normally fair well when it comes to naming NFL quarterbacks, or frat guys Jamie has drunkenly made out with. Rather than struggling to come up with something to name, as it fits in the respective category, I usually resolve to just call it a loss, and drink when it’s my turn. This could be annoying, but I look less like a dumbass than if the category had been “baseball teams,” and I answered “The Pittsburg Flyers,” which is neither a Pittsburg team, nor a baseball team. Not that that’s ever happened.

If a Queen is drawn early on, it can drag on for awhile. People are all too aware that they have to ask questions, and it can get pretty boring until someone pretty noticeably screws it up on purpose, or takes too long to think of another pointless question. However, later in the game when your Blood Alcohol Content is high enough to make you do things that would make your father cry, it is somehow the funniest thing in the world to hear someone answer a question with an answer. I like to try and get super sultry, and ask provocative questions of people I have no intention of hooking up with. It can really catch people off guard, and there’s hardly anything in this world that is funnier than making a grown man blush. Try it.

Kings make rules, so I suppose it’s fitting that if you draw a King, you are to make a rule. This is normally a time for guys to try and get you to do slutty things, which is fine if you’re in the right company, but I’d suggest to any girl to try to keep it PG-13 until she’s one-on-one with her betrothed. The only way to do it, is to come up with a good rule one time in your life, and use it every time. Don’t make me take the little man off my cup, or say “in the ass” at the end of every sentence…in the ass. I usually stick with “everyone has to speak in an accent,” because it’s hilarious, and in my head, I’m really good at accents, even though no one has ever confirmed the notion.

I don’t know that it’s appropriately named, but to start a “waterfall,” everyone starts drinking, and you can’t put your cup down until the person before you does. I’m not going to say I am pretending to drink for like, 75% of the time, but I am. Everyone cheats, at least everyone with a uterus, and honestly, it just becomes a lot of effort to go all the way to the kitchen, open a whole new packet of Crystal Light, and make an entirely new mixed drink to play with, if you finish. I suppose it’s different for those people who drink beer, but…who drinks beer? My second day of college, I learned that if you ask a boy to find you liquor at a house party, he’ll do it, so I’ve never concerned myself with learning to like it. Just be sure to keep your straw filled, or people will get mad.

I don’t know who came up with this glorious game, but I’d like to thank the mystery man (or woman), who decided a deck of cards should dictate how and when you drink, and should be discarded beneath the tab of a can of beer (that you force the boy you’re flirting with to drink for you). It is a signature game of our generation, and much like our parents tell us “we played quarters,” we’ll be telling our children “we played king’s,” the difference of course being no one carries quarters any more, but forever and ever, no party house will be complete without a deck of cards.