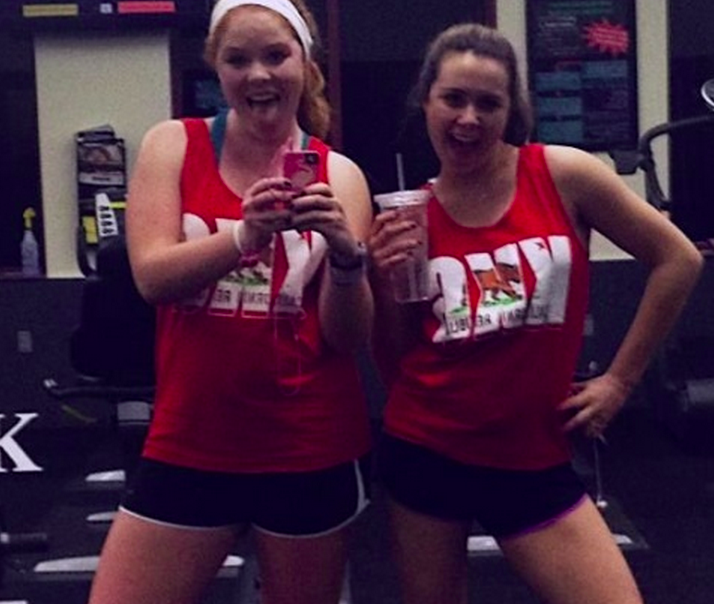 We’ve heard the stories. We had the nightmares. Hell, we gossiped about it during recruitment. Fitness journals. My older friends had told me that some chapters (the top ones) made you complete so many “gym” hours a week. You had to do workouts, eat healthy, and be fit in order to stay in good standings in the chapter. Nowadays, I’m pretty sure that would be considered hazing, but back then (and by back then I mean like five years ago), it was a thing. A big thing.

I missed that era. Thank God. The thought of being forced to go to the gym is my version of hell. Some girls, however, were disappointed. They thrived on fitness. On having a healthy lifestyle. On not eating pizza six times a week or watching a disturbing amount of Netflix. One girl in particular wanted the structure and support of a sisterhood with the dedication and loyalty to fitness.

So instead of just annoyingly bringing it up in chapter like most of us would do, she decided to make it happen. She made her own fitness/girl power/sisterhood organization and it. is. intense.

According to USA Today, CHAARG (“Changing Health Attitudes and Actions to Recreate Girls”) was first created by Elisabeth Tavierne when she gave up her swimming career at Ohio State University. After being an athlete all of her life, she still wanted to maintain a healthy lifestyle after quitting the team as a sophomore. When she went to the gym however, she noticed something: all of the girls were on ellipticals.

Even though most of our gyms have fantastic weight rooms, equipment, and tracks, most of us gravitate towards the classic “this is pretty easy and I can watch “Sex and the City” while doing it” machine. But Liz? She wasn’t having it.

Drawing inspiration from her experience as a sorority member at OSU, Tavierne realized a similar setup could work for CHAARG. Like a sorority, CHAARG’s structure includes weekly workouts that are reminiscent of chapter meetings and its members pay dues each semester. But the fees are far cheaper than those of a sorority: $45 per semester for the regular chapters and $55 per year for the virtual chapter.

Sarah Clem, the current chapter trainer, was the first ambassador to expand CHAARG beyond OSU. She established the chapter at the University of Cincinnati (UC), from which she graduated in 2015 with double majors in entrepreneurship and marketing.

“[Adapting to college life] is something that many incoming freshman girls struggle with,” Clem says. “[CHAARG] is a way to immerse yourself into a community and surround yourself with a support system who want to help you set goals and achieve them.”

Clem now oversees CHAARG’s 17 active chapters and will help open another six in the fall. According to Clem, the organization has approximately 2,500 active members and hopes to double that number after expanding in the fall.

Fuck. Well looks like I won’t be getting a bid from them.

Still, despite my aversion to the gym, I checked out the website and it looks legit. Unfortunately. I’m talking meal plans, Facebook groups, and tons of different types of workouts (CrossFit, Zumba, and other physical fitness things that I don’t know much about). And honestly? It’s kind of terrifying. The only thing worse than competing with other Panhellenic sororities on campus would be competing with a fitness sorority on campus. Our binge drinking, late night Taco Bell eating, Netflix marathoning selves can’t compare to their nightly workouts and “clean eating” Instagram pages. They’re going to be so hot, and it’s just really, really sad for the rest of us.

So like, we’re happy for you CHAARG, really. But try to keep your abs on lockdown until we can get our shit together, okay? It’s just the sisterly thing to do. Now be a dear and point me to the gym, I have a date with the elliptical..