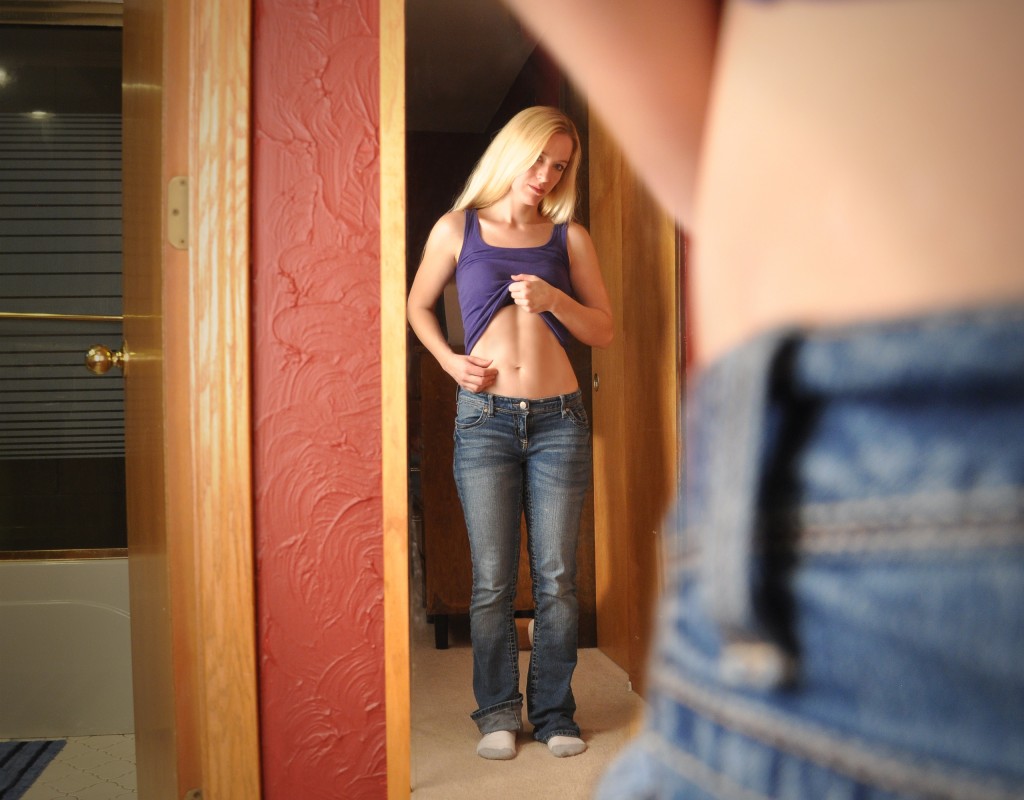 I remember exactly when it started. It was long before “thinspiration” and the thigh gap. It was before most of us had gym memberships or did cleanses. I was dying to be skinny. The first time I realized I was unhappy with my body was at my grandfather’s birthday party. I was sitting down, impatiently waiting for everyone to step aside so I could get a piece of chocolate cake with buttercream icing when my great-grandmother approached me. She looked me up and down and said, “You’ve gotten quite plump, haven’t you?”

I’m sure she didn’t even mean it in any way other than observationally, but at that moment, I felt the extra weight on me. I saw the rolls of fat on my stomach and the way the excess energy pushed out through the stretch marks on my pudgy thighs. In a moment of clarity that led to more than a decade of pain, I had my first real memory: “I’m fat.”

I was four years old.

I’m not quite sure if it was genetics or the fact that I ate like a linebacker, but either way, I didn’t look “like the other girls,” and that was all I wanted. I felt so bulky and awkward in my body. All my friends were petite. They looked adorable in shorts and dresses, and I felt like a giant next to them. I wore these horrible, black velvet, stretchy pants to school every single day because I couldn’t fit into jeans. I was miserable.

I was 11 years old when I went to the doctor who told me I weighed 112 pounds. In the car on my way to school after the appointment, my mother asked me if I thought it was okay for a girl my age to weigh that much. Her voice oozed of concern, which only made it worse. I wanted to be the beautiful daughter who she had always dreamed of having. She wanted me to be healthy and happy, but I didn’t know how to make that happen, and I didn’t understand what I had done wrong or why I had failed. I told her I didn’t know if that weight was okay, and I tried to hide my shame and tears.

I was 15 years old when I had my first “serious” relationship with a guy who (I thought) was completely out of my league. He was the classic high school heartthrob. He was popular, athletic, and had the most beautiful eyes. He also had a long list of gorgeous, skinny ex-girlfriends. I thought I could never compare.

I was shocked by how easy it was. My mom would pack me a lunch every day, which I threw away as soon as I got to school. I’d drink Diet Coke when I started to feel dizzy. I’d get excited when my stomach would growl from hunger, because that meant the fat was disappearing. I’d wait until I got home before I allowed myself to eat for the first time that day. But, unfortunately, eating a small amount of food wouldn’t get the job done.

After starving myself for more than 12 hours, my body welcomed any morsel of energy, so I ate to the point of literal sickness. I’d stand in the kitchen and shovel down a whole bag of chips with salsa, cookies, pizza, and ice cream. I knew the more I ate, the easier it would be, so I kept going until my stomach protruded and I felt like I was going to burst. Then, I’d go upstairs, turn on the shower, and throw up all of it. I wouldn’t stop throwing up until I saw everything I’d just eaten come back out. I had to bring myself to the point of dry-heaving, of regurgitating stomach acid. I had to make sure there was nothing left. It was painful. Sometimes my heart would start to hurt, and sometimes I’d feel it pounding rapidly in my chest. Sometimes I’d get so dizzy that I’d nearly pass out. But none of it stopped me. I was dedicated. I had to be skinny. I had to be beautiful.

In all honesty, I didn’t feel shocked or even concerned by my actions. I felt liberated. I felt proud. For the first time in my life, I could eat whatever I wanted and watch the scale go down. I’d lost 20 pounds in the first month. I could zip up my pants. Hell, I could wear pants that zipped! The shorts that used to stop at my thighs now hung loosely on my hips, and I smiled as I used safety pins to hold them up. The popular girls began befriending me. One girl offered me the clothes she didn’t want anymore, because she’d outgrown them and I was “so much tinier” than she was. I was smaller than they were. It was everything I’d ever wanted.

Over time, I learned tricks. I couldn’t eat peanut butter, because it would get stuck when I tried to bring it back up. Chopsticks were a great tool, because they reached farther down my throat than I could with my fingers. I needed to keep a bowl in my room just in case my family was around and I couldn’t get into the bathroom. But eventually, binging and purging wasn’t cutting it. I was so addicted to the control I had over what my body looked like that bulimia just wasn’t enough. I started to resent food altogether. Carbs became a distant memory. Food became a distant memory.

I knew I needed some type of sustenance to survive, so I let myself eat a salad every other day. And that was all I ate. I’d bring my dinner plate up to my room each night and then flush it, untouched, when everyone was sleeping. Sometimes I’d let myself smell it. I’d long for it, but I’d ask myself, “Do you want to be fat?” before giving into temptation. Then I’d head straight to the bathroom, where I watched the potential fat go down into the sewer. If I ever treated myself with a meal or if not eating wasn’t an option in a public situation, I’d make sure I had a bathroom accessible. I couldn’t risk gaining weight. If I couldn’t hide the sound of my purging in the bathroom, I’d ride my bike to the woods and throw up there.

I’d do 1,000 crunches at night and weigh myself after every meal. I would watch my friends eat pretzels, cookies, and French fries and wonder how they could consume things like that and still live with themselves. Girls who I used to think were skinny now looked impossibly fat to me. I could see my hips and ribs, and I actually had a thigh gap. But that wasn’t good enough. I remember my main goal was to be able to count my ribs…when I was sitting down.

It didn’t go unnoticed. My mother came into my room crying, and she told me she knew what I was doing. I didn’t care. Friends told me they were worried. Family told me I was too skinny. I had never been called “skinny” before, and I loved the sound of it.

Then I had my annual physical. I was happy that the appointment was early in the day, because I hadn’t eaten yet and I didn’t want my doctor to think I was fat. I was told to wait in the room while my mother spoke to the doctor in the hallway. I heard the woman who gave birth to me cry to this stranger and say something no one thinks he or she will ever hear: “She has a disorder.”

The doctor came in and asked me a lot of questions. My responses were lies. He then did some tests and told me that I was extremely dehydrated and was, for all technical reasons, bulimic. He said I needed to start going to therapy.

I guess something inside of me finally clicked. Maybe it was watching my friends and family worry about me for more than a year, or maybe is was the déjà vu of being in the the car with my mother, leaving the doctor’s office, discussing my weight, and feeling like a failure. Maybe it was the fact that I finally realized enough was enough and going to therapy was admitting I had a problem.

Either way, I stopped.

I’d love to say I walked out of that office a changed woman, but that would be untrue. I struggled. I relapsed. It took a long time to be able to eat a slice of bread without hating myself, or enjoy pizza without having an all-consuming urge to throw up to avoid any weight gain.

According to the National Association of Anorexia Nervosa and Associated Disorders, 25 percent of college-aged women engage in binging and purging as a weight maintenance technique. That’s a quarter of us.

And people think that discussing the idea of “beauty” in today’s society is tired, pointless, and steadfast? Sure, we know the models are photoshopped, and sure, we know that we can’t base our goals off of fitness icons. But what about the environment we are in every day? How come so many of us feel the need to throw up what we eat just to be “beautiful”? What about all of the times we search for affirmation through our bodies as opposed to our morals, talents, or beliefs? How about the amount of times we look into the mirror and call ourselves fat? Or we whisper about how a girl has gained weight? How many times are we scared to do something, wear something, or be something because we are afraid of how we’ll look?

Coming from a girl who grew up with an eating disorder, I can honestly say, that is no fucking way to live.

All I wanted was to be beautiful, but it wasn’t until now that for the first time in my life, I feel it. I don’t have a thigh gap anymore, and my stomach might fold when I sit down. You might not look at me and say I’m a “10,” and I’m not ever going to be one of those girls on Instagram who makes everyone envious.

I’ve truly learned that beauty is what you make of it. I once weighed the ideal 100 pounds. I thought it would make me happy. But instead, I had sickly skin, rotting teeth, scraggly hair, and an all-consuming fear of gaining back a single pound. And now? Now, I eat what I want when I want it. Now, I don’t judge people based on their size, skin complexion, or other outwardly feature, because I don’t know the journey they are on. And neither do you.

I urge you, as the future generation, to take strides in making everyone feel beautiful. Because every single person is absolutely gorgeous not in spite of, but because of his or her love handles, stretch marks, “belly rolls,” or lack thereof. Know that your value is not based on how my “likes” you have on a picture, the number of boys who want to date you, and definitely not the number the scale gives you.

It’s the oldest lesson in the book: beauty is on the inside.

Isn’t it about time we start actually believing that? And you know a really great place where you can start? With yourself..

If you (or someone you know) are struggling with an eating disorder, call (630)-577-1330, email [email protected], or visit the National Association of Anorexia Nervosa and Associated Disorders website and helpline for more information.