A Hilarious, Real Life Account Of Role Play That Will Make Your Sex Life Seem Dull 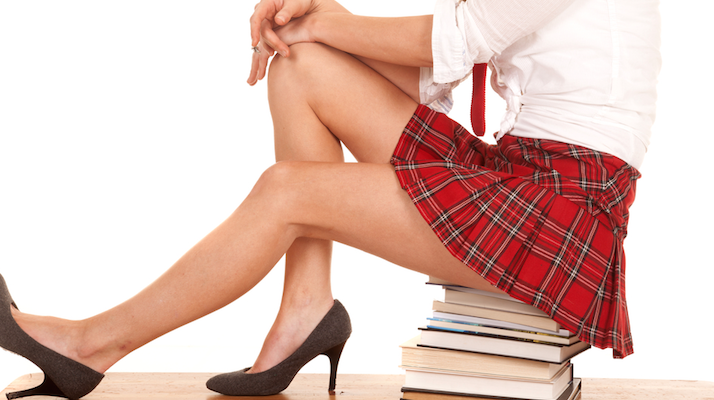 UGH. I glanced from my phone, to my outfit, to myself in the mirror. I looked like a hooker. I don’t mean any disrespect to hookers. But the skin-tight dress and eight inch heels that I was wearing just screamed “sexually promiscuous.” The text had arrived just as I was throwing some extra underwear in my bag, while running through my “interview points” in my head. Except it wasn’t your normal interview.

I was about to role play for the first time, and I had NO idea what I was in for. Or, well, what would be in me.

So why did my sort-of-boyfriend and I decide to do this? I have no idea. The whole year was filled with cheap amaretto sours and drunken, hazy hookups. One second I was tossing back vodka, and the next second I was awkwardly Googling “How to role play” during English class. It seemed simple enough. You throw on a costume and talk in a southern accent. Done and done.

Role Play Tip 1: It’s More Than That
Trust me. It’s like improv but with more dick. It’s all about agreeing and assisting. So just like with improv, think “Yes, and…” but after the “and” he shoves his erection in your mouth.

The five minutes of reading I had done gave me all the false confidence that I needed. I gulped down some air as my phone buzzed again.

Role Play Tip 2: Provide Your Own Transportation
This whole situation is awkward enough. Don’t add to it by trying to stay “in character” while your boyfriend drives you around in his fuck wagon. Drive yourself, or at least take the fucking shuttle.

Shit. I instantly felt the blood rush to my face as I gathered my purse, took one more peak in the mirror, and said goodbye to my dignity. I’m pretty sure there was no room for it this evening.

I saw his car out front and immediately felt the urge to turn around and run back into my apartment. My palms started to get unattractively sweaty as I reached for the door handle. Ugh this is it. Be cool. I ungracefully slid into the seat and managed to avoid eye contact. A definite sexy start to this fucking adventure. Shit. What do I say? Something sexy, but subtle. Cool, but not like I’m trying too hard.

Mr. M: “Thank you. You must be Miss A. I’m so pleased that you could interview with me this evening.”

Damn it, he was killing this. Fuck. All of those years of theatre and I can’t even win at role play? Time to get my shit together.

Mr. M: “Very nice to meet you. So, tell me about yourself, what made you apply for this position?

Oh my god. Was he going to give me an actual interview? Should I have brought my social security card? What about references? Shit.

Nailed it. He nodded and looked ahead, concentrating on the road. Thank God. I took a second to wipe the sweat off of my brow, and I noticed his hand move out of my view. It landed lightly at the top of my knee. Holy fuck. LOL at wiping the sweat off. HOW WAS THIS SO HARD? What do I do? Nothing. I’ll do nothing. Maybe if I don’t move he’ll forget that I exist. I did my best to avoid breathing as he pulled up to his house.

He shut off the engine and turned to me, making (terrifying) eye contact for the first time.

Mr. M: “So, Miss A, I like to do my interviews a little…differently. Very hands on.”

I glanced around the car to see if someone was filming this. They had to be, right? No one would say such a cheesy line unless it was on camera. I couldn’t see any red lights or drunken frat guys hovering near the car so I did a slight nod and continued to dart my eyes around.

Mr. M: “So if you’ll go ahead into the house, up the stairs, and into the second room on the left, we can get started. Make yourself comfortable. I’ll be along shortly.”

I detangled my legs and scurried out of the car. I could feel his eyes on my ass as I teetered towards the entrance. I sent a silent prayer to whomever was on duty, asking for the house to be empty, as I pulled open the door.

I scanned the foyer as my eyes adjusted. I saw the dingy couches, the stained floors, and the ancient composites that I had grown fond of in the past few months. I heard a crash from the adjacent room and a chorus of boys yell. I raced up the stairs and threw the door to Mr. M’s room shut behind me.

I walked towards the bed and perched on the end. I noticed that he had cleaned his desk, except for a pill bottle of weed, a bowl, and a lighter. Just as my heart rate was reaching a normal pace, the door swung open.

Obviously. I’d only been here every day for the past semester.

I watched him edge towards the desk. For the first time since we began our little acting class, he seemed nervous.

Mr. M: “Well as you know, this is an interview for MJF’s tobacco company.”

Uh. No. Actually, I didn’t know that.

Mr. M: “And for your practical interview I would like you to grind this weed, fill it in the bowl, and then light it for me.”

I watched the smile slowly spread across his face as my heart sank. He knew I had no idea how to work a weed smoking device, let alone a lighter. Sure, that makes me sound lame, but whatever. My small, skinny fingers were perfect for grasping a dick, not for flicking a lighter on and off. What did I look like? A fucking servant? Unfortunately, the first rule of role play is to always agree. Unless it’s butt stuff. So I cleared my throat and slowly edged towards the desk.

Honestly, it was easy. Doing it while I felt an erection push against my back? Yeah, not so much. After filling it, I turned around to see that his belt had mysteriously become unbuckled. Smooth. That’s when I remembered that I was supposed to make this “sexy.”

Internally, I rolled my eyes and tried to flick the lighter on. Shit. How do people do this? I instantly singed the tip of my finger as I lit the bowl and held it to his lips. He made eye contact with me as he exhaled the earthy-scented smoke in my face.

As I coughed up the illegal second-hand smoke, I figured I had one of two choices. Burn my finger again and get weirdly high, or drop to my knees and start sucking something else. I don’t really like weed, and I’m not one of those “classy bitches,” so guess which option I chose? Sorry, mom.

I immediately lowered my body to the floor as gracefully as possible. I let my finger tips slowly trail down his chest, stomach, and finally to his throbbing dick. I grasped his pants and pulled them down around his ankles. The fabric of his boxers looked like it was about to split at the seams, thanks to his massive erection. I tried to swallow back my laughter as I forced myself not to quote a scene from “Anchorman.” I lowered my head, put my lips around the head of his penis, and made eye contact with him as I slowly sucked his cock. I saw his eyes roll back into his head as he bit his lip.

I’m not sure if he chose to ignore me, or if my balls-in-mouth gurgling made it hard to tell what I was saying. Instead of responding, he let out a guttural moan, which I took as a “yes.” I spent the next ten minutes swirling my tongue around his shaft, massaging his balls, and attempting to make eye contact while looking sultry, as opposed to possessed. Not an easy task. I wonder how porn stars do that? Good for them, honestly. They must nail interviews. You know. Nail?! Just when I though I was going to get through this, I felt the laughter rise up in my throat.

Role Play Tip 6: Try Not To Laugh
Just like, try.

I tried to suppress it, but I felt the giggles spill out around his penis. Instead of stopping me, he started groaning harder, and I felt more blood rush to his already impressive-sized boner.

Role Play Tip 7: But If You Do Laugh, Just Go With It
Apparently if feels pretty damn good on a dick. Who knew?

Mr. M: “You passed the oral round of the interview. Now I need you to stand up.”

I mentally laughed at his “oral” joke and I hauled my body off of the floor. I tried to wipe the spit from my numb mouth as Mr. M and his boner walked towards me. He reached forward and hooked his thumbs around my underwear. I watched as he slowly moved them down my body and shivered with anticipation. As soon as my six for $25 panties hit the floor, Mr. M twirled me around so my back was to him. I felt his warm breath tickle my ear as he leaned forward to tell me what was next.

WHOA. I’m sorry. When did I start hooking up with a fucking champion? A lesser woman (or one with more self-respect) might have been offended by this statement. I, however, got impressively wet. I obediently bent over and moaned as his penis slipped inside of me. The next ten (okay five) minutes were the most orgasmic ones I have ever experienced. He pulled my hair as his body slammed me from behind. I felt my knees tremble as he put a firm, (but safe, calm down) hand around my neck. I was being choked during my fake interview and HOLY FUCK it was hot. Just as I screamed out in ecstasy he started shouting.

Hear that bitches? #Employment. And with that, he collapsed on top of me. Thank you ladies and gents. That’s how it’s fucking done. Naturally, I started laughing immediately. I pushed his giant man-body off of me and stood in the middle of the room, trying to catch my breath. I did it. I managed to be someone else completely while fucking someone I know so well. “Mr. M” sat up and look me straight in the eye. Never had I ever seen a look of pure bliss on someone’s face. We both started laughing and going over our favorite parts of the sex-venture. Was it perfect? No. Was it weird? Fuck yeah. Was it worth it? 100 percent.

Role Play Tip 8: No Matter What, Have Fun
Not to sound like a cheesy coach, but this is the most important thing. Besides no matter what happens, you’re going to score (wink wink).

Finally, after discussing our favorite “sexy puns” and complimenting each other on a job well done, Mr. M turned to me and said the sexiest thing of the whole night.

Best job I’ve ever had..