ADPis Allegedly Beat The Ever-Living Shit Out Of Some Girl, Nationals Denies Allegations 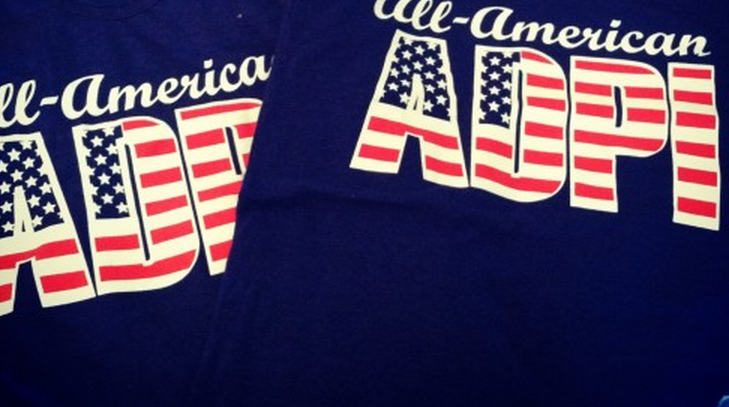 Late Monday night, we got a tip from Sam Houston State University about a group of sorority girls who, allegedly, beat the ever-living shit out of a girl named Jamie Lawless. The girl posted a status update to Facebook detailing the injuries she sustained from the girls who jumped her and her friend, Emma, as they were leaving the sorority’s party. The details are unclear, as Lawless said the fight was six against one, but she also made it clear that her friend was with her. Regardless, the full post is below, accompanied by photos of the girl covered in blood, along with a closeup of her head injury. Warning: it’s graphic. 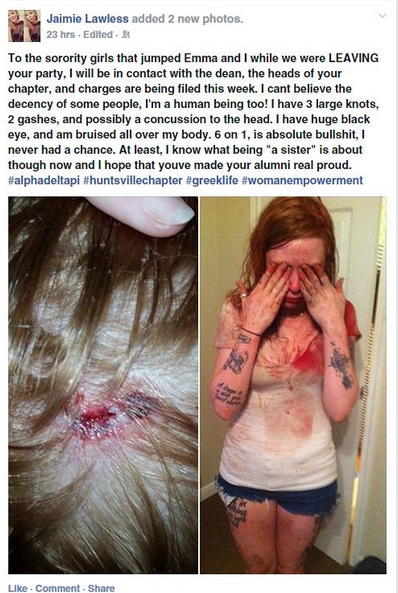 A number of tweets can be seen attacking the SHSU chapter of Alpha Delta Pi, which has recently deleted its Twitter account. Claims have been made that members of the sorority also stole the girl’s phone.

@SHSU_ADPI your “sisters” did this and stole her phone. pic.twitter.com/jqMDoBXCsJ

There’s no question at all that this was an absolutely detestable act of violence against someone, and it never should have happened. What is unclear, however, is the whodunit of it all. This is certainly not congruent with the sorority’s values, and it seems unlikely that the group might do this for no reason. Total Sorority Move spoke to a representative from ADPi’s Nationals for comment:

“We have investigated these allegations and have confirmed at this time, with eyewitness corroboration, that no ADPi members were present during this assault. This incident took place in a parking lot outside a private apartment, and no ADPi members were involved in the assault. We are horrified at the photos, and have encouraged this young woman to seek medical attention. We hope that she recovers quickly from her injuries.” – Alpha Delta Pi International Headquarters

According to ADPi, “the police and medical personnel were present at the scene, and no ADPis have been involved in their investigation.” ADPi concluded that no one had received more information from Lawless, the assault victim, about the incident. They are unsure why she blamed Alpha Delta Pi members for her assault if none were involved..