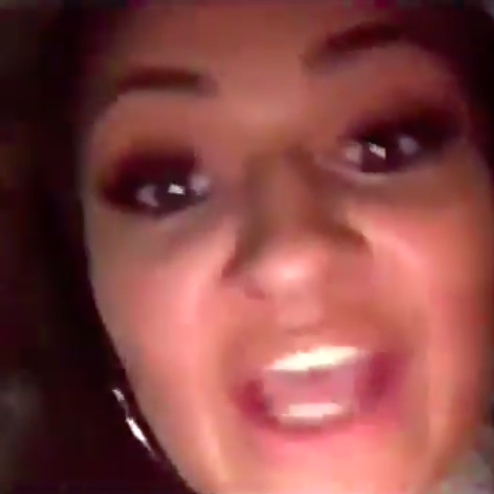 You guys. Remember back in 2015 when Alabama Alpha Phi’s sorority recruitment video went viral and everyone was all “ehrmergerd, everyone’s so white and hyper feminine. Burn the witch!” And we were like, “no, but you guys. They’re just chilling. This is what recruitment videos look like. Can they live?” As it turns out, a little bit of burn the witch may have been in order.

Straight outta ‘Bama, we have this video that is straight up horrifying.

The video was posted to the girl’s Finsta (fake Insta, keep up), a private Instagram account where people often post racier content that they don’t want made public. Of course, this was made public, thanks to the iPhone’s trusty record screen feature. I’ve truly never seen someone so boldly and proudly racist in my life, and the content of the video is appalling. The video was seemingly leaked, and sent to the girl’s sorority, Alpha Phi, as one (or more) of its viewers were as put off by it as any decent human should be. Rather than take this time to reflect and apologize, homegirl posted a follow-up video.

LMAOOOOO BRO SHE SO BOLD…. yeah her life over after these videos lmaooo pic.twitter.com/1vYt80ACkr

My mouth is agape. I can not believe what I’ve just watched.

These remarks are ignorant and disturbing and in no way reflect the values of The University of Alabama. This unfortunate behavior has been reported to the Office of Student Conduct as it does not align with the community expectations of students at the Capstone.

Alpha Phi nationals has stated that the member has been removed.

@TabisBack @UofAlabama Alpha Phi is a diverse, values-based organization and condemns the language and opinions in these videos. They are offensive and hateful to both our own members and to other members of the community. Ms. Barber is no longer a member of Alpha Phi.

And after all this, this is how she responded:

LMAOOOOOOOOOO it's no way y'all hate black people this much. Jesus she ain't stopping pic.twitter.com/kKbBVXgEgS