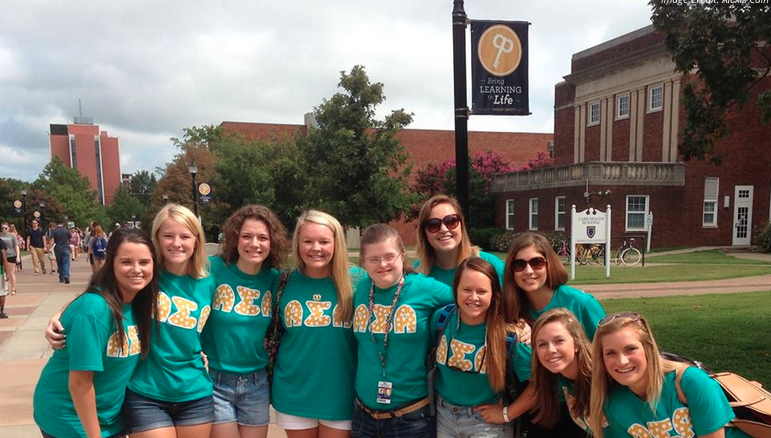 One thing sororities often get slammed for is their lack of diversity. Whether it’s true or not, we are often cited as not being accepting of anyone who doesn’t fit the stereotype of a “typical” sorority girl. But what we know is that that’s a bunch totally bogus, because there is no “typical” sorority girl; every one of us is different, with different passions, skills, values and beliefs. But sorority women are all alike in some ways: they are smart, caring, determined, down-to-earth women who are leaders on their campuses. They are women like Alexis Cain.

Alexis is a senior at Murray State University in Kentucky, where she is enrolled in the College to Career Experience (CCE) and participates in the Best Buddies program. About a year ago, she expressed an interest in participating in sorority recruitment, telling her mother that she thought it would be great to have all of these sisters. And on August 16, Murray State’s Bid Day, Alexis’ dream came true, when she was extended and accepted a bid to Alpha Sigma Alpha.

Seems like your typical Bid Day story right? Well, there is something that makes this one a little bit more special: Alexis was diagnosed with Down Syndrome at birth and her membership makes her the first college woman with the genetic disorder to receive a bid from a sorority at Murray State.

“Kids with disabilities get left out as their life goes on. It’s sad, but true. Mostly they only have family that thinks about them, therefore, they typically get left behind; not many friends or places to go. Sure, they have Best Buddies and Special Olympics activities, but there’s not much out there in the real world. It’s just a fact. That makes a very lonely life for them if they don’t have anyone other than family. Alexis feels very proud to be a part of this group of outstanding ASA young women, and I hope that their decision to accept her will change the attitudes of others as well for a long time to come. She makes you want to be a better person after you’ve spent time with her.”

Welcome to the Panhellenic sisterhood, Alexis. We’re very excited to have you!.