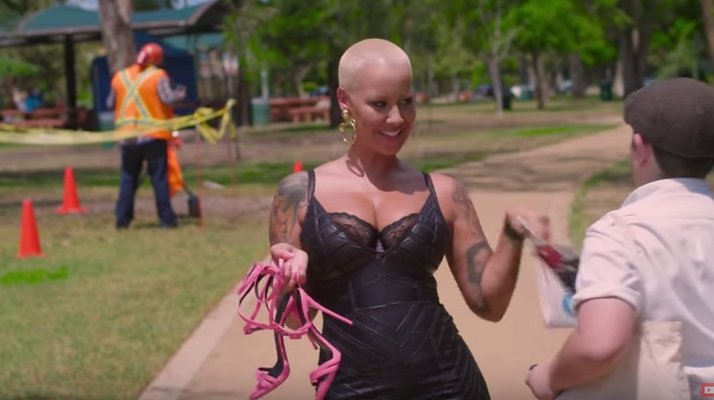 Amber Rose, who was formerly known for being a model and dating rappers, has made quite a name for herself recently. She has single-handedly started a global Anti-Slut-Shaming Movement.

This past Friday, she held a SlutWalk, which was heavily attended by supporters in Downtown LA. Amber wore a sexy lingerie one-piece and rocked thigh-high boots while carrying signs that said things such as, “My Pussy My Choice” and “Strippers Have Feelings, Too.” The SlutWalk included dance performances, food and merchandise stands, and HIV and STD testing.

Back at Pershing Square after a short walk down Olive St., crowd waits for the main event at @slutwalk_la pic.twitter.com/GztJFCmxo8

Even her mom made an appearance holding a sign that said “Fuck Yo 30 Showers” in reference to Amber’s ex Kanye West claiming he had to take 30 showers before getting with Kim.

Amber Rose's mom holds a sign at the #SlutWalk in LA #amberroseslutwalk pic.twitter.com/fQMj9gbkOc

The Amber Rose Foundation sponsored the event while promoting their mission of “uplifting, empowering, and enhancing the platform of women across the globe.” Her main focus for this movement is not only on the promotion of equality, but also on sexual education for young women. Instead of teaching women how not to be raped, we should teach men not to rape. Instead of telling women to cover up, we should teach men to not constantly sexualize women.

She also appeared in a hilarious digital short called “The Walk Of No Shame,” which imagined a world where women did not have to feel ashamed for getting a little action.

So as Amber says, celebrate your bodies, ladies, even a few times a day..