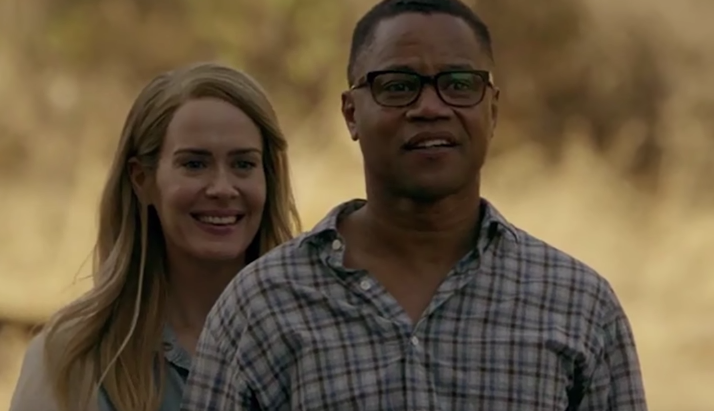 Remember back when we all thought we knew what this season’s “American Horror Story” theme was? And then we found out that lol we had no idea because Ryan Murphy likes to play with our hearts and souls? Yeah. It was a stressful time to say the least. But finally, about two weeks ago, we were put out of our misery. Episode one of “My Roanoke Nightmare” aired aired and we were like, “Oh. Okay. This is what this is. Fine.”

I mean sure, it was a little weird. There was no opening song. The whole thing was being shot documentary style. And while we were told it was Roanoke themed, it was all just pretty weird. It’s a modern couple. It has to do with a ~murder house~ (#tbt). Evan Peters has yet to show up. So yeah, things weren’t exactly adding up. And now, Ryan Murphy is speaking out to say no shit it’s not adding up — he’s still fucking us.

He spoke to Entertainment Weekly:

Now before you pull your hair out and curse the entire cast of “AHS” with your wannabe “Coven” witchcraft, just know we’re not the only ones in the dark. Longtime “Horror Story” actor, Dennis O’Hare (who played the man with the burned face in season one, the butler in “Coven,” and the transgender woman in season five — just to name a few) said that the actors don’t even know what the hell is happening in the show.

We actually don’t know anything. We don’t get all the scripts. When you do get a script, you get it late — and even if you get the script, you don’t know what’s happening, so you’re like, “Uh.”

He went on to say that in season one, he thought he killed his family until episode six when he (like us) found out that no. Evan Peters (who played Tate) actually did it. So don’t worry. Everyone’s minds are blowing up at the same time, whether you’re a fan or an actor.

And speaking of the sixth episode, as Ryan said that’s when the promised head explosion will take place this season. The only difference is that this season there will only be ten episodes instead of the usual thirteen. Which means that after episode two we don’t know what’s happening, we don’t know what’s going to happen, and we don’t even know what, if anything, the theme means. And there are only eight episodes left. There have been hints to the “reenactors” meeting the real couple, rumors on who even *is* the real couple, and if this whole thing isn’t just a movie set and things are about to get really, really bad — but nothing is confirmed.

As usual, we’re all in the dark. At least now we know we’re not the only confused ones.