An Answer To The Age-Old Question: Am I Pretty Enough To Rush? 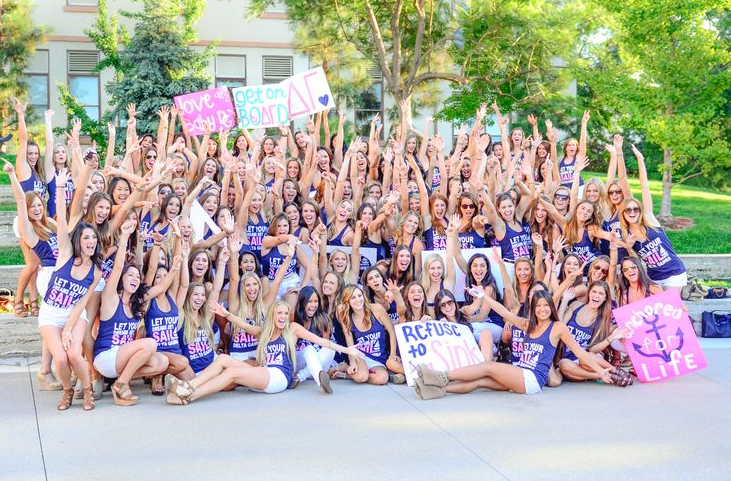 I’ve wanted to write a column on this topic for some time, so when a reader emailed in asking about this very subject, it seemed like a good time to tackle it. So, just how vain are sorority girls?

Hi Catie!
I’m trying to decide on which college to go to and Ole Miss is LITERALLY my dream school. The only thing is I’ve heard how competitive recruitment can be and I’m scared to get down there and not get a bid. My cousin is a KKG and I know I’m not technically a legacy but it’s better than nothing. I have a [redacted] on the ACT and a [redacted] GPA and I only take advanced classes. I’m class secretary, the president of two clubs, a member of a few others, and I am a varsity cheerleader. I know at any other college this might be above average but I feel at Ole Miss it will be mediocre. I’m just wondering just how competitive recruitment actually is and how great of a chance I have to get a bid. I also dont know how soon to start getting recs, I’m in the second semester of my junior year and im not sure if that’s too soon. I want to be prepared but I’m really confused on the whole timeline of how this stuff is supposed to work out.

My typical go-to response to mailbags is to give some sort of sassy advice that would in no way help, but reading this hurt my heart, so I’m going to do something I’ve never really done with a mailbag before: I’m going to be serious. Now, there are a lot of elements at play here, so stay with me — this is a long one.

After reading your email (and then rereading it three more times) I feel comfortable assuming that the REAL question here is not something that you actually asked, but, rather, something that you alluded to. Basically, you want to know if you’re “good enough” to make it through recruitment — and we all know that when it comes to Greek life, “good enough” and “pretty enough” are basically synonymous. So, C, the question at hand here is whether or not you are pretty enough to get a bid. The answer to that is: I don’t know.

When my grandmother went through recruitment sixty years ago, it was based on looks. The same thing goes for when my mom went through thirty-five years ago, when my sisters went through fifteen and twelve years ago, respectively, and also for when I went through six years ago. Sure, other things were considered: personality, academic success, involvement in high school, family life (money). But when it came down to it, the question was always “Is she pretty enough to be in our house?”

Is it fucked? Yes. Is it the truth? Again, yes.

If we’re being honest, at my school (a private East Coast university) I was in a top-tier house. But if we’re being even more honest, if I had rushed at a school like Ole Miss, I would probably have been in a house that sat somewhere comfortably in the middle — not the best, but not the worst, either. I’m what you would call “cute,” not “hot,” but I have good enough hair and wear nice enough makeup and am capable of looking put together when I want to. Looking back, it also probably didn’t hurt that after four years of being a varsity athlete, I had a good enough body as well. And this — the good enough hair and the good enough body and the “cute” enough face — was enough to make it into a top-tier house at my small school where not a ton of people rushed. But I’m not — and nor was I ever — “Ole Miss beautiful.” I was simply “east coast cute.”

Looking back on my senior year of high school, I sometimes wonder if subconsciously, I didn’t consider going to an SEC school because I didn’t want to be a little (read: average) fish in a big (read: beautiful) pond, though the sane part of my brain knows that is utter nonsense. I chose the school I went to because I wanted to go there. I, unlike everyone else in my family, did not want to go to college in the south. The fact that rushing was “easier” at my non-SEC school was just an added bonus. It worked out, and, quite honestly, it was a confidence booster. Because — and I’m going to say something controversial — despite what people say about tiers not existing, they’re lying. Tiers absolutely do exist. And being at the top? It’s awesome, but it’s not everything.

A New York Times article from 2012 profiles the service of two women known as “RushBiddies,” who quite literally teach high school-aged women how to go through recruitment. Where are they based, you ask? Birmingham, Alabama. And these ladies are not the only ones in the business. In fact, sorority recruitment consultants have existed for some time now, and they charge up to — wait for it — $8,000 a session. Sorority recruitment is, in fact, a business — and most of this business takes place below the Mason-Dixon line.

Of course, not every girl (or even the majority) who has rushed in the south was professionally coached. To imply that would be ridiculous, but the coaches do exist — and therefore, so do the clients. Additionally, just because someone was not professionally coached, does not mean she is at a disadvantage when it comes to recruitment. The south has always had strong ties to Greek life, and if you are born and bred in, say, Oxford, Mississippi, you are going to be better suited to go through rush than a girl from Scranton, Pennsylvania, who is the first one in her family to even consider going Greek.

Now, let’s circle back a bit. What do being prepared and being pretty have to do with one another? Well, the answer to that is everything. As I said earlier, my grandmother, my mother, and both of my sisters were all in sororities down south and had I decided to attend an SEC school, they would’ve whipped my ass into recruitment-ready shape. My teeth probably would’ve been bleached, my hair likely dyed (maybe with extensions added), and my general disposition and personality would’ve been critiqued, trained, and perfected. Perhaps I would’ve gone from “east coast cute” to “Ole Miss beautiful” but I didn’t need to, because as I said, recruitment was not that big of a deal at my school. I was fine going through with my not-so-white teeth and my not-so-perfectly teased hair and my not-so-perfectly answered questions — but that laid back attitude would not have gotten me the same result at a different school. To land in a top-tier sorority at a school where recruitment is cutthroat, I would’ve needed to have tried a lot harder.

So, C, will you make it through recruitment with a bid? I don’t know. And it pains me to say that. But I don’t.

Maybe there will be a day when looks aren’t judged at all, and that someone with great grades and a great attitude gets an automatic bid to a top-tier house, but I don’t see that happening, because life just isn’t like that. We, as a whole, are a society that judges people based off of how attractive they are. To be fair, though, we do the same with wealth, intelligence, humor…the list goes on. It is human nature to seek out perfection, both in yourself and in others. The same people who shame sorority recruitment for being vain and cutthroat are the same ones who have no problem swiping left on Tinder every single night. The only difference is that one is public and one is not. The fact of the matter is that life is cutthroat — sororities just make it more obvious than people wish to acknowledge.

In the meantime, slowly start asking around for recommendations, and plan to get a recommendation for EVERY sorority on the campus of your choosing. Sororities can change a lot from year to year, and, as stated above, so can you.