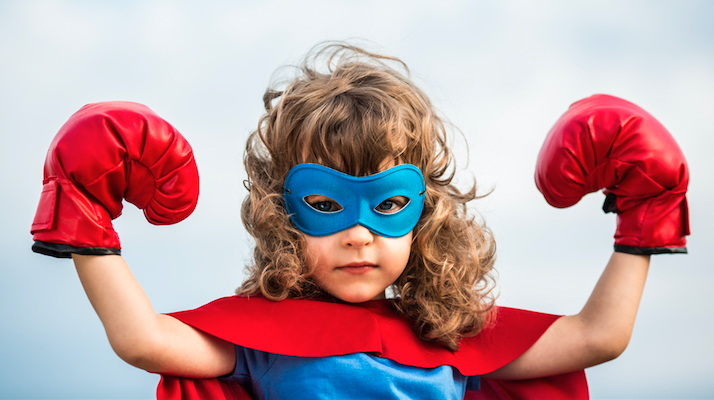 Halloween costumes are so difficult to pick out. We spend hours on Pinterest trying to figure out what we can be with what we have in our closet. It’s even more difficult for younger girls who still get to rationalize spending money on a costume. For Anya and Stella, looking for a costume this year was especially different. They both had their hearts set on being superheroes. But when they went to the store with their dad, John Marcotte, they were barraged with pink, glitzy, fru fru outfits. Even the superhero costumes came with a tutu and a dumbass wand. Marcotte decided that enough was enough. He was tired of seeing the perpetuation that girls need to be “cute” and women need to be “sexy” on Halloween.

Marcotte is a web designer who runs Heroic Girls, an organization that “aims to empower young girls.” He started the hashtag #MoreThanCute which encouraged young girls to be just that, more than cute. He wrote on his website,

When choosing a costume, boys are told they can be anything they want: brave, scary, smart, adventurous and more. The costumes designed for girls, on the other hand, tell them that no matter what they aspire to be, the only thing that society truly values is that they look ‘cute.’

He added that there was nothing wrong with cute outfits, but there should be additional options. Soon, the internet exploded with posts of little girls dressing #MoreThanCute.

My #daughter is #beautiful, but she is #morethancute – when she asked to be #darthvader for #Halloween, I showed her a pink one. She said, "No! The real Darth #Vader!" How could I refuse? There is nothing wrong with my #twoyearold #princess #dressingup as a #SithLord – it #matchesherpersonality = #spunky and #vivacious. (The #tutu was 100% #myidea. She humors me) #heroicgirl #heroicgirls @heroicgirls #toddlers #toddler #toddlersofinstagram #toddlerstyle #happyhalloween

Marcotte hopes that this will at least make a “small change in the world,” and that his girls will grow up in a society where they are allowed to be more than cute.

You go girls. Now if you’ll excuse me, I have a sexy cat costume I need to return..