Today is Valentine’s Day — which for many people is, simply put, the fucking worst. If you’re in a relationship, you’re just setting yourself up for the disappointment that naturally comes when two people are supposed to “surprise” each other, but their expectations don’t match. One hundred percent of women want flowers delivered to them publicly, and 93% of men only thought to deliver said flowers when it was too late. Some people don’t feel like they need “a day” to dictate when they’ll be romantic, but some people think having someone in your life to brag about on social media is half the fun of the holiday.

If you’re in a pseudo relationship, there’s a weird type of pressure. Even if you don’t actually want to spend Valentine’s Day with your insignificant other, you’re still painfully aware that he hasn’t asked you to do so. You’ll skirt the issue all day long. You’ll text like you normally do. You’ll joke with everyone else you know about how miserable the day is. All the while, you and your mans are pretending it doesn’t exist, which can throw this whole thing you had going on its head. You didn’t care until you knew he didn’t.

And if you’re single — oh, you poor, poor miserable soul. Today serves as nothing more than a reminder of how alone you are in this cruel, cruel world. Even if you’re happy being single, you still have to acknowledge the day in some capacity, and it just becomes awkward.

But I’m here to tell you, that Valentine’s Day my senior year of college was truthfully one of the greatest nights of my life.

I believe Valentine’s Day fell on a Monday that year. And I believe that because I just looked it up, and it did. I woke up angry that my father hadn’t sent me anything, because I guess now that I was only several months away from having a college degree, he’d decided I should also be responsible for finding someone else to buy me presents on a day meant to celebrate romantic love.

I went about my day, eager to avoid social media, along with any and all proclamations of love. Around 4pm, I left class with my best friend Ilana, and we walked passed the campus’s favorite watering hole — a bar slash pizzeria called “Grotto’s.” They served the worst pizza I’d ever had in my life (before leaving the north east, at which time the pizza got much much worse), but they also served $4 double LITs, and that, of course, was more important. Normally when you walked past Grotto’s patio, there was at least one person you knew, drunk off her ass, trying to lure you in to skip your responsibilities and drink with her.

But today was Valentine’s Day. So when Ilana and I walked passed the bar, there were only three people inside of it. And of course, they were girls in our sorority.

“OMG YOU GUYS! WHERE ARE YOU GOING RIGHT NOW?!” we heard one of the six Laurens from our pledge class shout to us.

“We’re just leaving class. I was going to maybe go to Starbs and study,” Ilana told them.

“DO NOT EVER SAY THAT TO ME AGAIN IN YOUR LIFE. COME DRINK WITH US.”

“Ugh, I don’t even look cute right now,” I argued.

This was a different time. In the mid-00s, class clothes were not quite as offensive as they are today. I was wearing leggings, a chambray top, some knee-high boots, and a scarf. My hair was down, and I had on very minimal makeup. I wasn’t embarrassing to look at, but I wasn’t bar ready.

“Veronica, literally NO ONE is here. And no one will be here. Because they are all out on dates. You have somewhere better to be?”

So we walked in. And we drank. And soon, we were just as rowdy as the Laurens before us. And with every passing friend we saw, our squad grew. We began texting everyone to come out and eventually, our entire pledge class had arrived, minus a couple of skanks who had boyfriends, but who cares about them.

We sat around and drank two, three, six double long islands each. We ate cheap bar popcorn, and ordered terrible pizza. And for some reason, when some idiot showed up with a heart full of chocolate, we replaced it with a white powdery substance we could all enjoy. 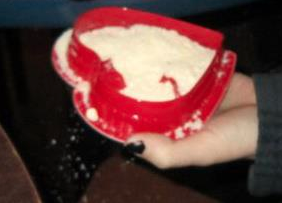 That’s right. Parmesan cheese. I’m not sure why. But I do know Ilana was eventually convinced to take her used shot glass, fill it with said cheese, and take a shot of that instead.

A few creepy townies showed up as the evening progressed, assuming they’d hit on desperate single girls who were busy drinking their sorrows away at the bar. And while one of my sisters did end up making out with a townie, eventually we realized we didn’t care. We didn’t feel alone, because we had each other.

Recalling that day has become a tradition. Every year, my pledge class reposts the photos and think back on one of the last times we’d ever all be together. We send each other sweet messages, and all end in agreement, that no matter where life takes us, that will always go down as the greatest Valentine’s Day of all time, never be topped by boyfriends, or kids, or anyone else.

So, get out there today with the people you love the most. Whether that’s a man or a whole lot of best friends, you can still celebrate love without being a bitter single. Just have fun, make memories, and drink a whole lot of long island iced teas..