Countdown To Commencement: “Did I Act Like That When I Was A Freshman?” 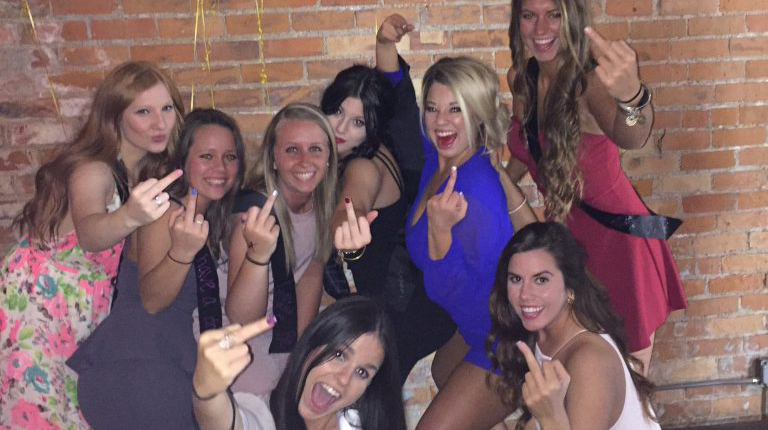 A person can change a lot in four years, especially if those four years are specifically devoted to finding yourself and growing into a fully functioning adult. Since you spend all day and every day with you, it’s hard to really notice a difference. It’s like when someone tells you your hair is getting long, and you look in the mirror and for the first time actually notice that your hair is super long (and also need a trim, those split ends are rough). Like that, except it’s your personality. It’s everything about you as a person. You started college a vulnerable little caterpillar, and you are about to emerge into the real world as a slightly less vulnerable butterfly. A butterfly with crippling debt and no idea how to even balance a checkbook, but a butterfly nonetheless. Not only have you grown, but your friends have grown. You have survived the ups and downs together, and have made it all the way to senior year without making a complete ass of yourself. Which gives you every right to judge those freshman bitches running around your campus.

By this point in the year, someone has finally told them to stop wearing a lanyard, but that’s the extent of the guidance that they have been given. They’re still dressing up for class, still showing up north of 10 minutes earlier, and what’s worst, is they actually buy textbooks. The poor things are wasting so much time and money. They complain about their 5 page paper for their writing seminar, but they have no idea what they have coming for them. If only things were that simple.

Going out as a freshman is nothing but cringeworthy. You’ll be out with your friends a little earlier than usual one night, and you’ll notice you are the oldest one there by at least three years. You couldn’t get into this bar until you were 21, where did they get their fakes from? The future? They are already teetering off of their heels and into a blackout, while you stand firmly in your boots and sip on a beer. The brave ones are drunk enough to try to dance with you, but they are immediately deterred by the daggers that you shoot at them from your eyeballs. Their outfits are similar to yours, but a little bit off. Their crop tops are either too cropped or not cropped enough. Their jeans are the same ones their mom bought them in high school (lucky bitches still fit in them). Their shoes *almost* match, but they need to be a little more casual. They clearly do not have an older sister or friend to teach them how to do makeup, but that’s not your problem. You had to do it on your own, and they should too.

The most unforgivably embarrassing part of freshman year is the hookups. Take a moment to reflect on the guys that you wasted your time on, and promptly sprint to the bathroom to vomit. In most best friendships, there is one guy that each girl knows to never bring up, and nine times out of ten, this awkward act happened freshman year. The older guy that you had no chance with but still gave it your all when you saw him out. The guy in your class who stared at you for the rest of the year. The guy who was just ugly. We like to think we are immune to the disgusting dudes that roam our campus, but we aren’t. Well, at least our freshman year selves aren’t.

So when you see a freshman girl lost in a new building or flirting with a gyu who learly wants nothing to do with her, don’t help her. You turned out fine, and so will she..