Donald Trump Is Low Key Creeping On This Delta Zeta 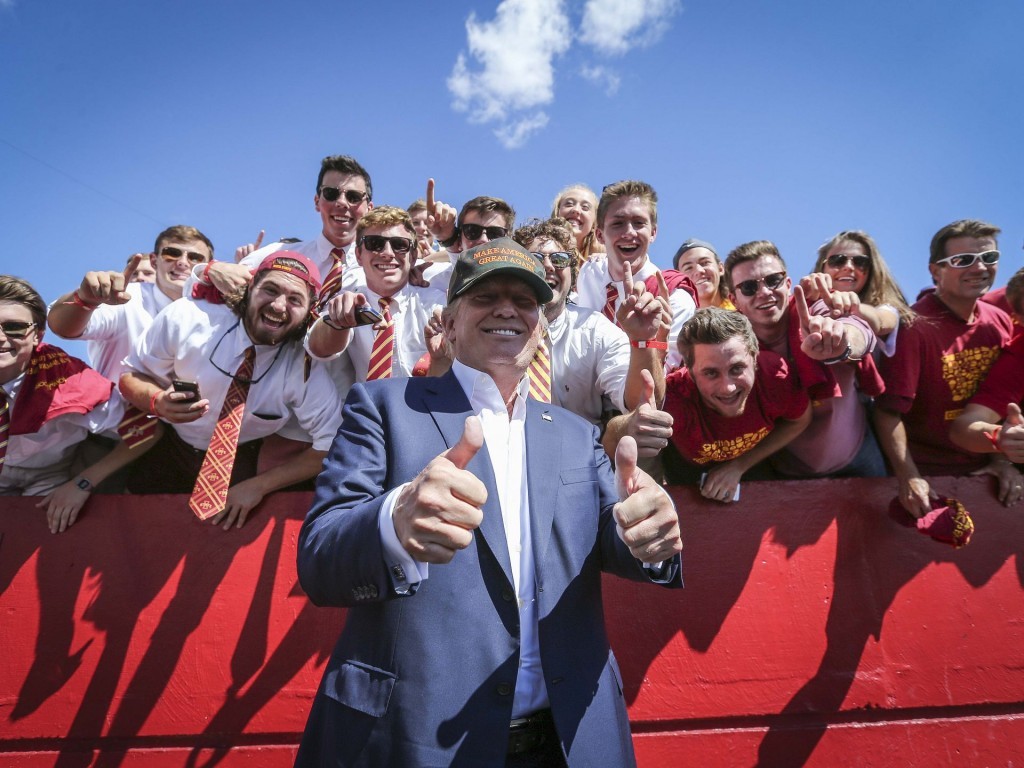 Friday night, Presidential hopeful Donald Trump visited a small liberal arts school in South Carolina, Winthrop University, to hold a campaign rally. Trump supporters and opposition alike, mixed in with citizens who were just there to observe the spectacle of it all, packed into the Winthrop coliseum to hear him speak. Highlights included the confiscation of a sign reading “Trump likes Nickelback,” the removal of several protesters from the event, and Trump revealing that, in a very “Stars! They’re just like us!” fashion, even men that marry models can’t resist chatting up a pretty sorority girl.

Elizabeth, a member of Delta Zeta who recently received a Bachelor’s in Political Science and is now pursuing her Master’s degree, was surprised when Trump approached her group and spoke to her.

On a post to her Facebook page, accompanied by a picture of “the Donald” himself, Elizabeth described her experience with Trump:

“No lie. I was at the rally when Trump came up to me and said “Whose girlfriend is this? Are you his girlfriend?”

I have no clue how to feel about this.”

The first thing I thought was that she should be flattered. I mean, the man spends the majority of his time around some of the most beautiful women in the world, and he stopped to compliment her. But then I stopped and thought about Elizabeth. Yes, she’s a beautiful girl. She could give some of the TFM Girls a run for their money. But she’s also one of the most intelligent people I’ve ever met. She was probably one of the most intelligent people in attendance Friday night. But here she was, being reduced to just some guy’s girlfriend. So I asked her to tell me more about her experience.

“He was coming by to shake hands. I’m not a huge Trump fan, so I wasn’t grappling for a handshake like everyone else, but he stopped in front of me, which was surprising. That’s when he looked at me, stopped, and asked the guys to the left and right of me if I was their girlfriend. He asked me if I had a boyfriend, I said “no, and I’m fine.” Which is partially a lie, but I’m not about to admit my relationship problems to Donald Trump of all people. He said “Oh! Well you’re very beautiful, you’d make a beautiful girlfriend.”

What were you thinking at that moment? Like, you’re probably more intelligent than 90% of the people at that rally, Trump included, but he’s telling you that you’d make a beautiful girlfriend.

“My initial thought was that he asked the boys first if I was their girlfriend. He didn’t address me first, the one he was “complimenting.” Instead, it was “Is this your girlfriend?” Beauty aside, no, I don’t belong to either of them, or anyone for that matter. Then there’s the whole “you’d make a beautiful girlfriend.” I’ll take the compliment, but he could’ve ended it with “you’re beautiful” rather than saying that my beauty would make me a desirable girlfriend. I already have a political science degree under my belt (go figure), and I’m in a Master’s program right out from undergrad, at UVA! That’s not exactly an easy thing to do. Being a girlfriend isn’t what I amount to, and it pales in comparison to my other accomplishments.”

I could end with a joke about how, like most things Donald Trump loves, his love of sorority women is unwelcome, kind of creepy, and just a little misogynistic. But this isn’t funny. This man, who approaches women by asking what man they belong to, who has no respect for women as a gender or a political force, this man has a real chance of becoming the president of the United States. So instead, I want to let Elizabeth end this article with a message for Mr. Trump, because she says it better than I ever could:

Thanks for the compliment, but you’re wrong. I’ll make a beautiful policy maker. While single, I’m earning my master’s degree. I’ll be educated, I’ll be helping others, and I’ll be fighting tooth and nail for policies that benefit the American people. That is beauty. It is being a woman. It is freedom of speech, freedom of religion, freedoms you silence at your rallies. I’ll be making a difference in the world, and according to you, I’ll look helluh fine doing it.”.