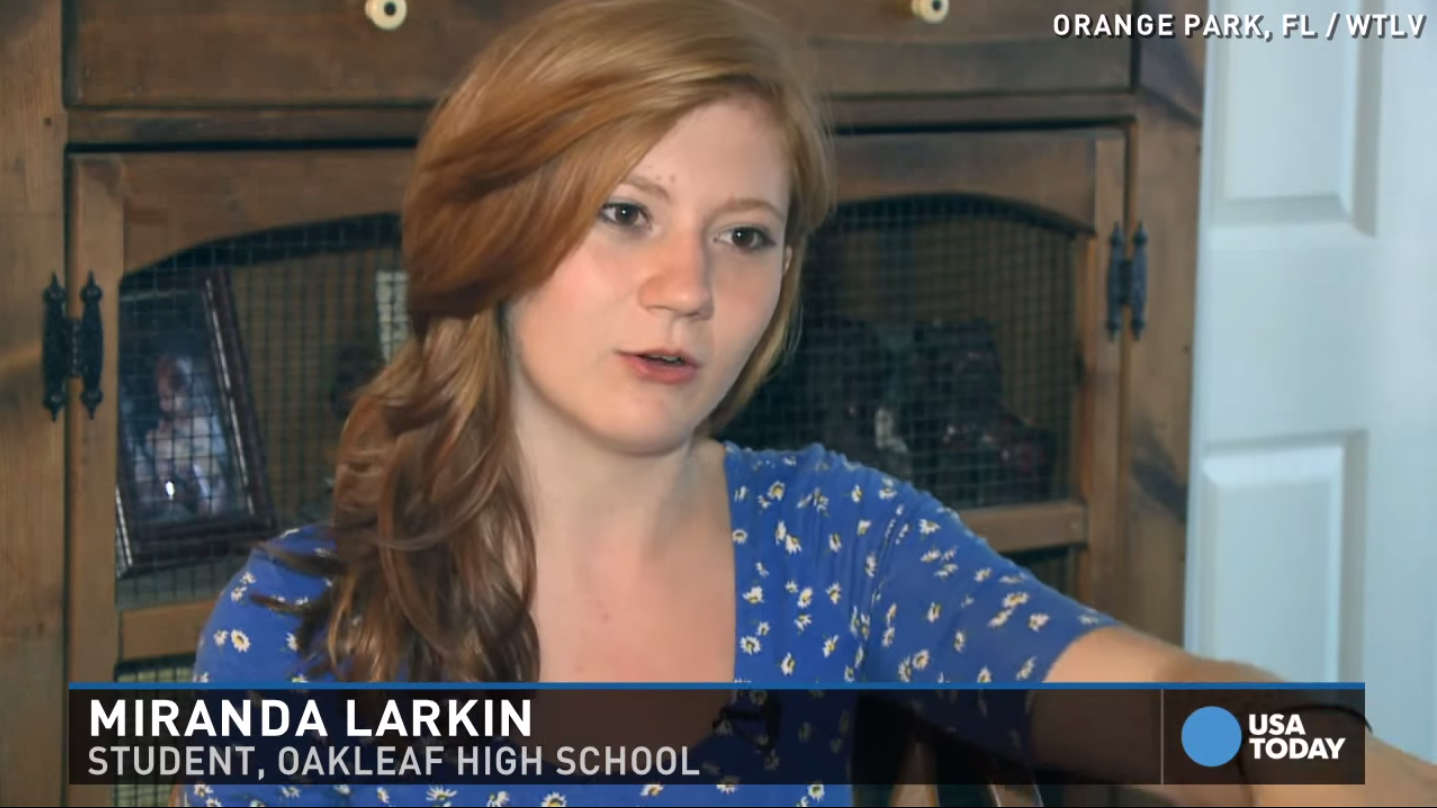 As a military brat, I’d like to think that I know a thing or two about being the new kid in school. And the biggest lesson that I learned, with every new school I started at, was to keep my head down until I made friends. Which, I’m sure, is what 15 year old Miranda Larkin planned to do when she started at Oakleaf High School. Unfortunately, the school had other plans.

Miranda, after violating the school’s dress code with a skirt that was less than an inch too short, (the school’s dress code states that skirts must be no shorter than three inches above the knee, Miranda’s was a little closer to four) was given the opportunity to correct the violation with what her mother labeled a “shame suit,” and I have to say, I would’ve been ashamed to be seen in it, too. Meant to humiliate students to prevent later violations, the “dress code violation outfit” is made up of large red sweatpants and a big yellow t-shirt. Both have the words “DRESS CODE VIOLATION” printed largely in plain sight.

Miranda’s mother, Diana Larkin, told “USA Today” that when Miranda looked at herself in the mirror she “started sobbing and broke out in hives.” (Can’t say I blame her, that outfit IS terrible.) A Clay County Schools spokesman told reporters that students are given three options after violating the dress code: spend the day in school suspension, have a parent bring a more appropriate outfit, or put on the aforementioned “shame suit.” Miranda, however, says that the only option that she was given was the dress code violation outfit. Luckily for Miranda, the school eventually allowed her mother to come sign her out of school, rather than spend the entire day looking like a reverse Winnie the Pooh meets convict.

As of right now, Miranda’s mother plans to file a complaint against the school for violations of the Family Educational Rights and Privacy Act, stating that the school printing the shirt and pants with “dress code violation” is releasing her daughter’s disciplinary records without permission, a clear breach of FERPA regulations. Larkin, in a letter to the ABC, called herself a proponent for school uniforms and said that her problem is not with the dress code but “with the public shaming of kids.”

No word yet on how the outfit has affected Miranda’s dating life, but if I were her I would be suing for cruel and unusual punishment.