Girl Kicked Out Of Sorority For Having Tinder, And That’s Not Even The Worst Of It

Let’s talk about this photo quickly. 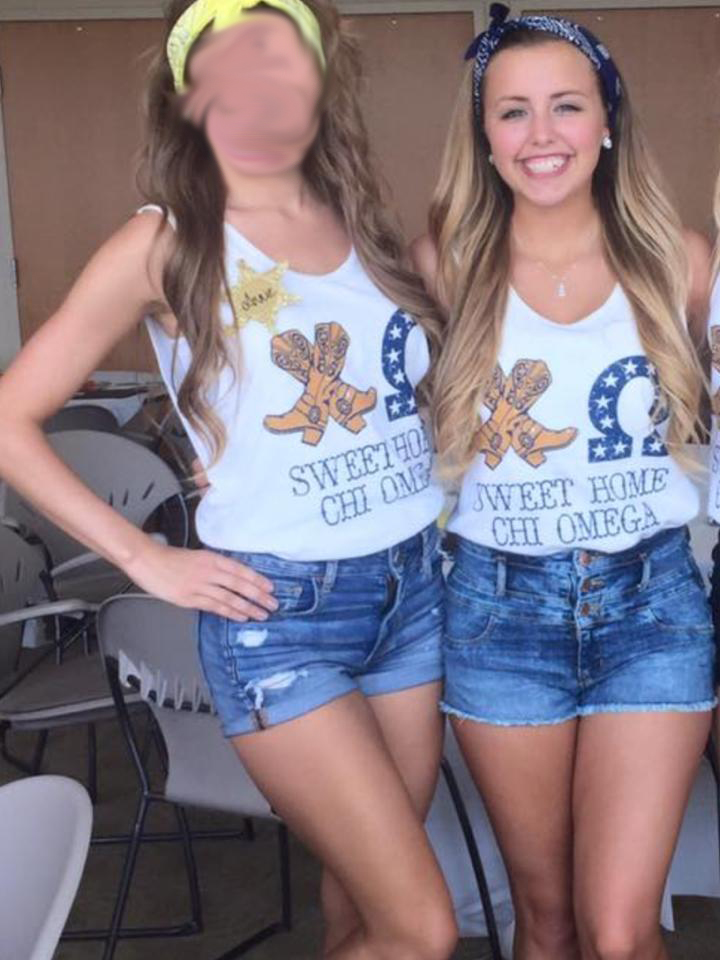 The girl on the right is named Shannon Workman. She was a Chi Omega at the University of Nebraska Omaha, and here she is at Bid Day wearing a Chi O tank top, provided to her by her chapter and jean shorts, as the girls were instructed to wear. The girls are smiling, there doesn’t appear to be alcohol involved, they are completely covered, and yet, this is the photo that got Shannon kicked out of her sorority, eight months after it was posted for being “promiscuous and risqué.”

First and foremost, this is the least promiscuous outfit I’ve ever seen. Secondly, if it’s so risqué and conflicting with Chi Omega’s values, why were the girls instructed to wear it? THAT’S WHAT I THOUGHT.

So essentially….she was kicked out for Tinder-ing in letters. Last I checked, Tinder is a place to meet people, and thousands upon thousands of people find relationships through the app, so to assert Shannon was using this “provocative” photo simply for hookups is asinine. Regardless, this chapter of Chi O maintains that a photo associated with the sorority “cannot be posted anywhere that is considered distasteful or inappropriate.” The rule, I’m sure, exists so sorority women aren’t wearing letters in like pornos, but a dating app? That seems like fair game to me. Members are generally given eight hours to remove a photo from the time they’re notified it’s “inappropriate.” After eight hours, girls will be called to personnel (standards). Workman was given no notice, before her meeting at which the decided punishment was termination because of her “attitude.”

If you take a look at the RT and like ratio going on here, it seems like Workman, who was described to TSM as “an angel,” has a ton of support.

I love my mom 💕 pic.twitter.com/doRuZ9tWSI

When I was forcibly removed from Chi Omega Zeta Delta, I chose to keep my mouth shut and just kind of dealt with the…

Hmm, and how about all those ten or more members? What is going on at Chi O Nebraska Omaha?!

This all comes three or so weeks after a shift in some of the board members (including the president and personnel chair) at the hands of an advisor named Ashley Hall. The sorority had recently been put on social probation, and a source tells TSM a chapter initiative was put forth to “weed out the bad seeds.” Since then, at least a dozen “bad seeds” have been “weeded out.” At least five have had their memberships forcibly revoked for seemingly frivolous reasons, while at least eight (with more allegedly rolling in) have elected to remove themselves after having felt targeted and vilified by the chapter and the advisor in a matter of two or three weeks. It’s a virtual witch hunt.

One member was called in for a judicial hearing for the following retweet, because of the word “bitch.”

In her hearing, she told the board that she didn’t realize this would be grounds for judicial. To me, this seems like the type of thing where you get a good ole fashioned “Girlfriend, just take this down, so no one can claim to be offended by it. And you need to do a few extra study hours this week.” But according to the member, this was grounds for termination, which her advisor made clear to her when she said “The way your mother raised you does not align with the values of Chi Omega.” After that, she rightfully got pissed off and elected to resign on her own, before they could kick her out.

And there’s also a sophomore who spoke to TSM who claims her whole group of friends has one by one been dropping from the sorority like flies. She claims the sorority’s advisor has “never liked” her, but recently she was called in for “drugs and alcohol.” The meeting was really about a party at her house — one she claims she wasn’t even at. Her roommates were in a different sorority, and they hosted the party while she was out. Throughout the duration of her meeting, irrelevant charges were allegedly brought up by the chapter’s personnel advisor. When the sophomore denied any accusations made against her, she tells TSM she was told “we know what type of girl you are.” At the end of the meeting, her membership was revoked.

Many of the girls who were removed or elected to remove themselves have complaints of personnel and its advisor sort of “playing favorites.” Other members, they say, are guilty of the same misdemeanors (vulgar tweets, Tinder profiles, parties at their houses), and their memberships are still intact.

TSM has not reached any impartial members of the sorority. The chapter president, the sorority, and the advisor in question have, however, all been reached for comment. All have neglected to reply.

To me, this is all appalling. I don’t know when the shift took place that reputation is more important than sisterhood, but it needs to fucking stop. At the end of the day, the most important thing is the women you meet in these organizations. As a writer for a publication that pokes fun at sorority girls liking to party, I’ve been told hundreds of times that TSM, its content, and I are a “bad reflection on Greek life.”

You want to know what’s a bad reflection on Greek life? Chapters like this one. Chapters, and women, who think the most important thing is that no one sees you as anything other than perfect beacons of class at every moment in your life, rather than a real, raw woman, who maybe uses a dating app, or goes to a party, or *gasp* likes rap music. This attitude, that we should be going after each other and getting each other in trouble for small things will be the real “downfall” of Greek life. It’s this attitude that turns these organizations we hold so dear from a place to do good and have fun into a place where you have to fear the women you call sisters — into a place where you can’t confide in people you share your letters with — into a place where you have to hide part of yourself because it’s not perfect.

And that, ladies, is the only real negative stereotype associated with sororities. And it’s a damn shame that in some cases, it’s true..