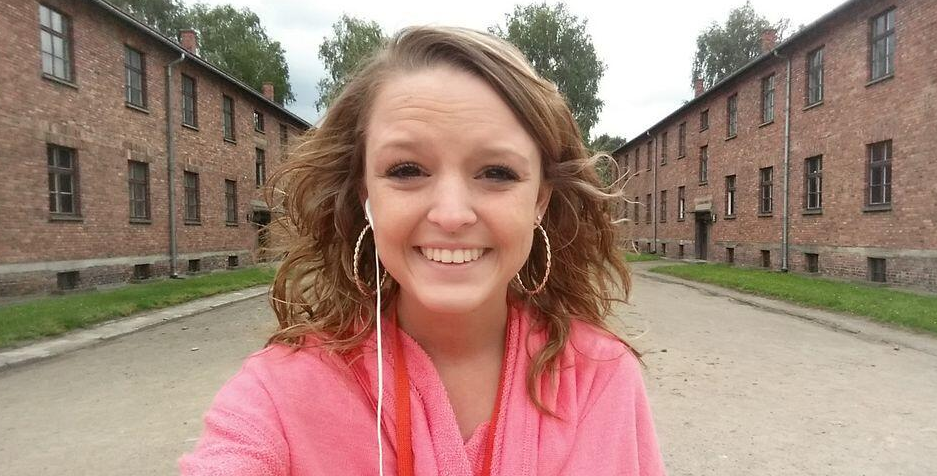 It’s finally come to this, ladies and gentlemen. The selfie game of kids (and adults, too–let’s be real here) trying to one-up each other at being “on point” has gone too far. First, we had funeral selfies, then we started seeing duckfaces at the Vietnam War Memorial, and there was also a Chernobyl selfie that just made people radiate with anger. I think the selfie game has now finally reached a critical mass, and it’s about time we put an end to this shit.

Selfie in the Auschwitz Concentration Camppic.twitter.com/cPVpGl3Hpb

A Twitter user by the name of “Princess Breanna,” in her infinite wisdom, decided to take a picture at the infamous Auschwitz Concentration Camp in Oświęcim, Poland, which is now a museum and memorial to the lives lost in the Holocaust. She’s wearing her headphones. And she’s smiling from ear to ear. And there’s a smiling emoji in the caption, which is “Selfie in the Auschwitz Concentration Camp.”

At least she spelled “Auschwitz” correctly, right? That’s something.

Breanna tweeted the photo back in June, but it only recently started to pick up traction, which just goes to show you that nothing is ever “gone” on the Internet.

The traction has not been kind to Princess Breanna.

@TeighLeigh yeah, I do understand what happened there. I studied it for years with my dad and we always planned to visit there but he died

Then she started threatening people who harassed her.

Even Jar Jar Binks was pissed.

@sh1tbemeltin @IanBHough I didn’t take a selfie, but I have tons of pictures. Wanna see one?

Omg I wish people would quit tweeting to, quoting, retweeting, and favoriting my picture of my smiling in Auschwitz Concentration Camp.

Unfortunately, just like every selfie that goes incredibly viral these days, for better or worse, this child reveled in her newfound fame.

Kids, this is not the stuff that fame is made of. Negative attention is not at all the same as positive attention. Do you really want to say that you’re famous for tweeting a smiling selfie from a place where Nazis experimented on human beings, forced prisoners to do labor just because of their religion, race, sexual orientation, or physical disabilities, and tried to eradicate an entire people off the face of the Earth? Well, you shouldn’t.

Trust me, colleges and employers will absolutely see this. When a simple Google search for your name produces results that say “Selfie at Auschwitz Concentration Camp,” I’d imagine that any and all scholarship offers, college acceptances, or job leads you might have received will completely dry up. It’s a pretty easy way to fuck up your ENTIRE future.