Guy On OkCupid Loses His Shit After Being Ignored, Proves Men Are Actually The Crazy Ones 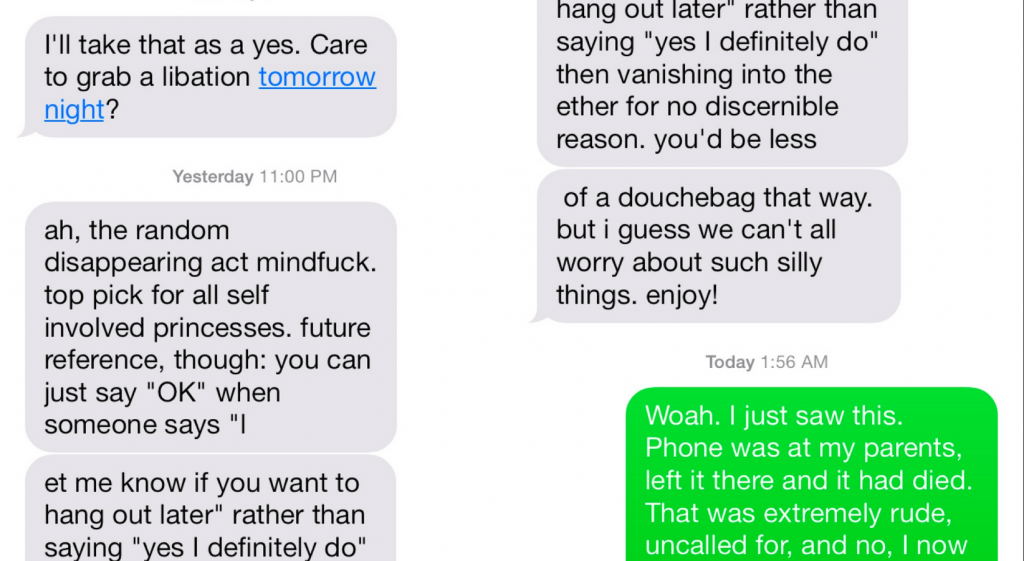 It seems recently as if we can’t go a single week without some crazy guy doing some crazy thing. We’ve got dudes pretending to be dead to get a text back, guys flipping out when girls on Tinder won’t put out, and now we’ve got THIS GUY on OkCupid. You guessed it: another crazy guy flipping out on some poor girl who didn’t reply to him.

Meet our new friend from OkCupid. He’s been on one date with our lovely lady and apparently, he’s hooked. After all, he called her a princess! He just put the words “self involved” in front of it. Once again, all the poor girl did was ignore some messages, which, according to her, she didn’t even mean to ignore.

After his tirade about how she should just tell him she doesn’t want to hang out, our girl actually tells him she left her phone at her parents’ house, that it was dead, and that she’s replying now to let him know she totally doesn’t want to see him again. Now, I have to give this guy some credit. He actually apologizes. But he doesn’t take any responsibility for what he did–he blames it on the “spree of lunatics that have sugared their ego at [his] expense,” AKA the other girls who weren’t super interested in homeboy. He ends by telling her that he’s not offering an excuse (even though he totally did) and that he’s only apologizing.

Well, there’s no apology strong enough to cover that amount of crazy, but it’s a valiant effort. Here’s to all the crazy guys of the world and the deactivation of any and all online meeting apps on my phone.