Guy Withholds Sex When His Wife Doesn’t Lose Weight, Realizes After 6 Years That It Doesn’t Work Like That 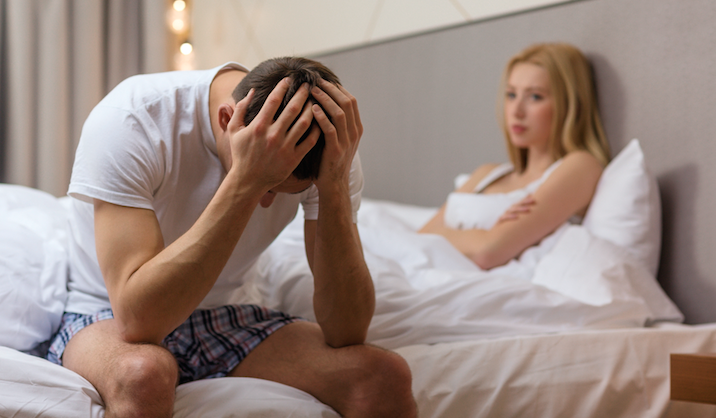 There are a lot of downsides to being female. We gush blood from our bodies once a month. We don’t get as much money, respect, or leeway as the guys. And on top of the whole less pay, having-to-birth-someone-from-our-bodies, trying to have careers while also having families thing, we’re also expected to be hot AF, because I mean, come on! Getting to that 6 a.m. spin class can’t be *that* hard when you work until 8 p.m. and are talking online grad school classes, right?

But despite all of that, the blood, the babies, and the beauty standards, we have a weapon — sex.

Now, some people might say this is petty and immature of me. And I’m not going to contradict that. But the truth is, sex can totally be a weapon for us. And just like most weapons, you can use it responsibly or you can use it recklessly. And unless you’re well trained, you might hurt yourself. It turns out that women are trained in this type of combat whereas men? Not so much.

You and your boyfriend fighting over who’s buying dinner? Trying to decide what to watch on TV? Debating whether or not he should go to a fall harvest festival with you? Sex works like a charm. It’s not necessarily morally sound, and I’m NOT advising it. I’m just saying — it works.

But the funny thing about using sex to your advantage is that for the most part, it doesn’t work for guys. Imagine, if you will, you get to your boyfriend’s apartment after a very, very long day. All you want in life is to drink a bottle of wine, eat half of an extra-large pizza, watch five hours of Netflix and then PTFO. But him? He wants to go out. So how does he convince you? He offers you his penis in exchange for you getting in the shower, putting on makeup, putting a bra *back* on, shoving your feet in some heels, and standing up in a crowded, sticky bar until 2 a.m.

Yeah. It’s fucking laughable because that? That shit never happens.

Recently a guy went through this exact situation when he tried to withhold sex to get his wife to lose weight. Seriously. I’m not making this up. He wrote to The Guardian:

I haven’t had sex with my wife since my youngest daughter’s birth six years ago. This is due, in part, to me. After the birth, I tried assisting my wife with her weight-loss efforts, but she ignored my advice. ‎I got fed up and avoided intercourse. I realise that my approach was not a good one and I have been making efforts for the past two years to go back to normal, but she is always running away.

This sounds like something a satirical website would make up. “Dumb Guy Realizes After 6 Years That Withholding Sex So His Wife Will Lose Weight Doesn’t Work.” It’s comical. But no, it’s not satire. Much to our sick, twisted, enjoyment, this is real. Thank God. He literally tried to be like “hey you’re too fat so until you lose some of that chub you get none of this chub.” Weird. I wonder why things didn’t work out for him. And it only took him six years to figure it out!

Little does he know is wife is over there laughing her ass off because not only can she eat whatever she wants now, but she doesn’t have to have sex with her probably-still-less-attractive-than-her asshole husband.

Sometimes it pays to be a woman..

[via The Guardian, h/t Cosmopolitan]