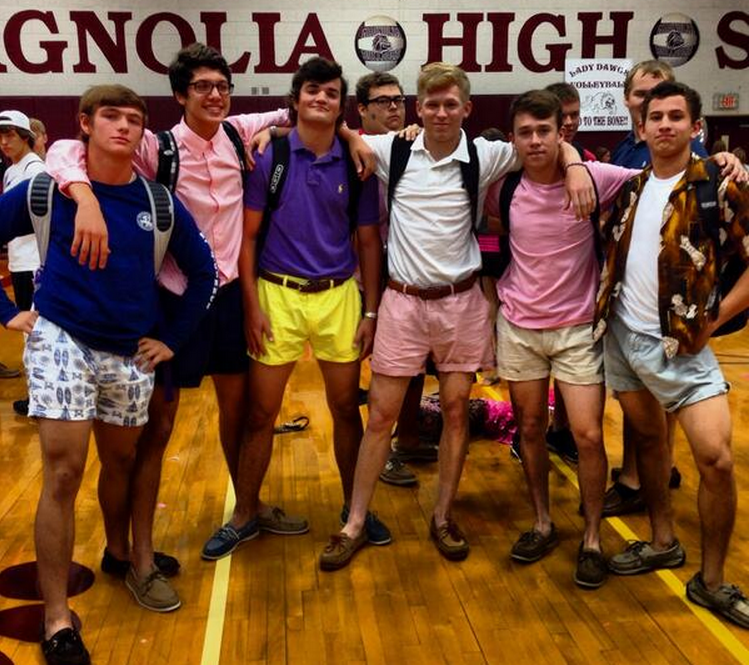 It wasn’t too long ago that I was a senior in high school. And by “it wasn’t too long ago,” I mean that it was in the last decade. It was an exciting time. Prom, graduation, and college were on the horizon. Freedom was so close, I could practically taste the Bacardi Ices and bad decisions. It seemed magical, heavenly, mythical even. College. Motherf-ing college. I could not wait.

So, like any good millennial, I took to the interwebs to look at shitty Ikea furniture and talk with complete strangers my future classmates about how excited I was. My goodness, I could barely contain myself. What Marilyn Monroe poster should I hang on my wall? Would my roommate agree that “imperfection is beauty, madness is genius and it’s better to be absolutely ridiculous than absolutely boring?” What color shower caddy should I get? Is it true that they serve ice cream 24 hours a day? WHAT IF THERE AREN’T ANY CUTE BOYS?! I had so many questions and only one way to get answers: The Class Of 2012 Facebook Group.

My future hall mates, lab partners, sorority sisters, hookups, and I used the wall as an outlet to introduce ourselves, find roommates, and endlessly repeat how OhEmGee-so-freaking-excited we were. It was great and it was (for the most part) completely innocent. We were shy 18-year-olds, anxious mini-humans, hesitant wannabe-adults. We talked about our interests, our majors that would change seventeen times before graduation, and how excited we all were for our upcoming proms. It was informative and it was sweet. We were a group of innocents, ready to embark on a future together — a future of nights we’d never forget, people we’d always remember, and bad decisions our virginal selves could not yet fathom. 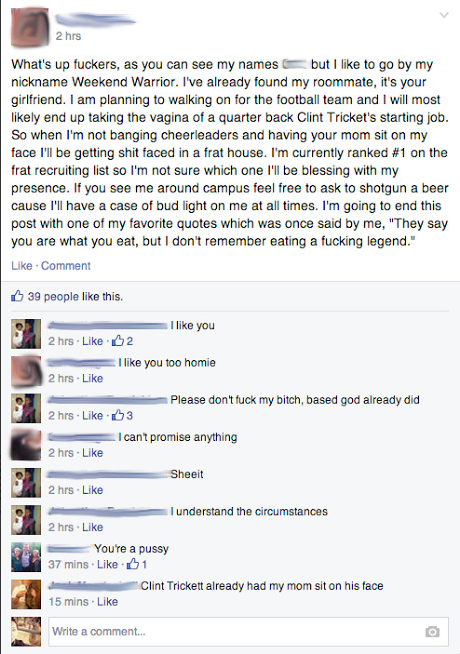 After receiving an anonymous tip from some high schooler who clearly reads TFM when he should be paying attention in homeroom, I did some digging on the West Virginia University Class of 2018 Facebook group. The group, which is private, only allows in future students who must be approved by the two little chumps who started this platform for smut in the first place. Clearly someone didn’t do his research, because I was approved immediately, despite my Facebook clearly saying that I am a college graduate — and not from the school in question — or that I work for Grandex. Let’s just say that this school should probably up their SAT requirement, or, you know, require that the test be taken at all. Whatever. Their loss is our gain. And, boy, what a gain it is.

Seriously, you guys, you wouldn’t believe the absurdities these little shits are posting. Odds are, a lot of them can’t even vote yet and they’re dropping f-bombs, p-bombs, and “I smoke a shitttttt ton of pot. LOL” bombs. Kids these days. The group is fucking free for all. Sex, drugs, alcohol — there doesn’t seem to be an inappropriate topic they’re afraid to touch. It’s insane. Where are the administrators? Or, better yet, their mothers?

Obviously, my favorite example of how little (soon-to-be) college kids care about getting a job one day, is this wise ass who posted what can only be described as the literary epitome of not giving a fuck about one’s reputation or future. Seriously. This kid, or, Weekend Warrior as he requests to be called, could not care less if he tried.

So many things. He wants to not only take ALL of the girlfriends, but he wants everyone’s mom to sit on his face. Seems a little selfish to me. You get one age bracket, Weekend Warrior, not the whole fucking spectrum. There’s no need to be greedy. Also, WW is a TFM fan, obviously. Number one frat recruit? How could he not read this site? Hell, I bet he’s reading this right now. He better be shotgunning a Bud Light while doing so — you know, since he claims to have a case on him at all times.

I stalked his Facebook. He does look pretty FaF. But he’s also StupidaF. Someone take this kid down a notch. And while you’re at it, call his mother. He needs his mouth washed out with soap, stat.