How To Be A Boss Ass B*tch At Drinking Games 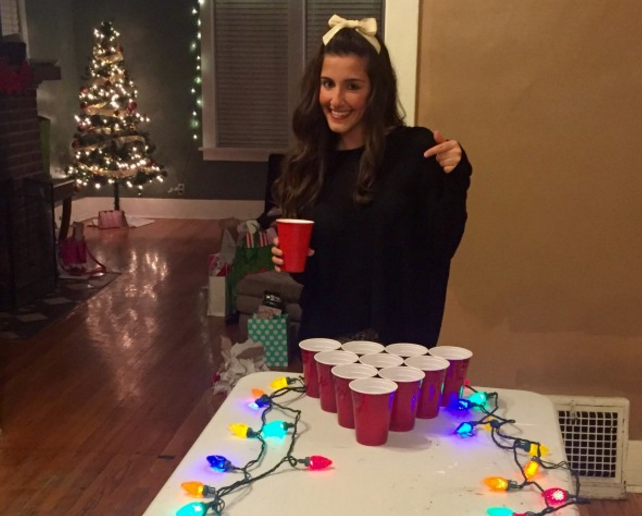 There are two types of girls in the world. Girls who are good at drinking games, and girls who hate the girls who are good at drinking games. Sure, that seems like a broad generalization (and it is) but you can’t argue with cold, hard facts. Because the truth is if you’re not the one standing in the center of a group of guys, laughing about how you beat them all at the own games, you wish you were.

But unless you had a husky, tom-boy phase when you were younger, had brothers, or showed any interest in sports that your dad happily leaped on, then you might be SOL when it comes to drinking games. So I’ve taken it upon myself to give you a little “here’s how to impress people with your binge drinking abilities” guide. With instructional videos, brief how-tos, and basic bitch tricks, you can go from standing in the corner talking shit, to being a ~cool girl~ in no time.

• What it is: Somehow having the ability to chug back warm beer and managing to flip the cup the right side up while your friends yell at you and you try not to slip on the disgusting, booze covered floor.
• How to play: You line up cups on two sides of the table, have two teams (pick the good one), and take turns flipping cups. Even a drunk person can understand it.
• Why it’s great: Once you master it, it’s like riding a bike. A booze-filled, “I’m a totally chill, laid back girl who loves games and am pretty much a guy” bike.
• Why it sucks: It’s not the easiest thing in the world to master. Like at all. And if you suck, it’s embarrassing AF.
• How to own: Be calm. Open your throat to get the liquid back as fast as possible (hi-oh!). This will buy you a second or two. Then, use a liiiiight touch to pop up the cup. You’re not trying to make the cup do a whole bunch of flips. Don’t be a show-off. And whatever you do, do not be the anchor. You don’t want that kind of pressure, trust me.

• What it is: The devil.
• How to play: Put 6 cups on a triangle on both ends of the table for both teams. Stand on either side, pray to any and all deities, and hope your ball makes in it a cup at the other end of the table.
• Why it’s great: Boys like you more if you’re good at beer pong. That’s just science.
• Why it sucks: Because beer pong makes you want to die?
• How to own: Witchcraft. Or perfecting your hand-eye coordination. Maybe basketball camp. Finding the perfect level of drunk that makes you confident but not cocky. And of course, aiming, following through, and tears.

• What it is: The reason you’re not talking to your boyfriend rn.
• How to play: Literally everyone in the world does it differently. Get a deck of cards, put them in a circle, argue about rules for thirty minutes and then just sort of figure it out as you go. Sometimes it involves a shot or an unopened can of beer in the center.
• Why it’s great: It has every component of a fun game. Chugging alcohol. “Never Have I Ever.” Chugging alcohol.
• Why it sucks: Your boyfriend will admit to having sex in a pool even though you’ve never had sex in a pool and things get real awkward, real fast.
• How to own: Have steady hands when placing the cards on top (or under the cap of) the drink, don’t admit to shit you’ve done with someone who isn’t the person you’re dating if the person you’re dating is next to you (yes, lie), and use a straw when waterfalling.

• What it is: An old timey game that your parents used to get drunk off of when they were in college.
• How to play: You just bounce a quarter into a shot glass. It really shouldn’t be as painfully hard as it is.
• Why it’s great: Because you get to drink? It’s vintage? I don’t know, guys. It’s not anyone’s favorite.
• Why it sucks: It’s like playing cards at an amusement park. It’s fine, but there are sooooo many better things to do. Besides, how the fuck do you actually get the quarter in the glass?
• How to own: Just bounce it really light. Like lighter than you think you should bounce it. Other than that just get drunk so you forget how bad you did.

• What it is: The game that’s sort of like quarters but also sort of like beer pong and also like flip cup so definitely the reason you’re hungover.
• How to play: Honestly? I’m not sure. It’s a whole bunch of throwing things, chugging things, and flipping things. Just follow someone else’s lead.
• Why it’s great: It’s loud. It’s energetic. And everyone soft of sucks at it.
• Why it sucks: No matter how many times you play, you never really know how to play.
• How to own: Drink. A lot.