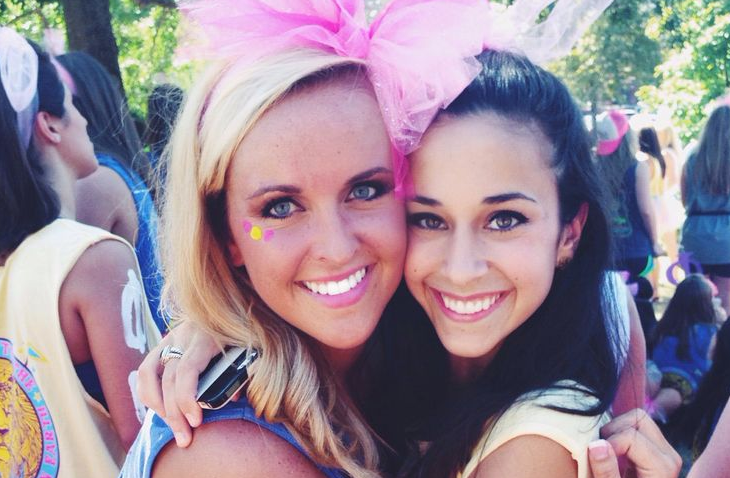 I’m inclined to believe that every girl picks up some sort of self-deprecating habit at some point in her life. Some habit that ends up in some way, shape, or form, making her feel bad about herself. For me, it’s always been that I seem to make friends with ridiculously pretty girls. Now, I don’t think I’m unattractive–I just happen to make friends with girls who are way prettier than I am. Growing up, it was practically impossible to find a boyfriend who hadn’t had a crush on my best friend first. And who could blame any of them? She was gorgeous and I was “cute.” I could have bought property in the friend zone and built a house there, because once a potential love interest met her, I was out. I don’t blame her for that. I never have. But I told myself that when I went to college, things were going to change. Then I managed to become friends with the prettiest girls on my floor.

See what I’m getting at? It’s a bad habit, sure. But these girls also happen to be some of the best friends I’ve ever had, so I can’t bring myself to be upset with them. While it’s hard being the girl who always gets the “Who’s your friend?” question, I love my friends and I don’t know what I would do without them. And, after a few times of going out with them, I realized that it wasn’t them I needed to change–it was the way I was looking at myself. I was so busy comparing myself to them that I forgot all the good things about me. It suddenly didn’t matter that I had read all of Dante’s “The Divine Comedy” (and understood it). It didn’t matter that I’m actually funny, and that I love my eyes. All I could see was the fact that I didn’t feel like I was as good as they were. I spent so much time thinking about the guys who WEREN’T hitting on me that I stopped noticing the ones who did. I was tearing myself down over something that was all in my head.

See, what all of the “cute” girls need to realize is that we’re JUST as beautiful as our “hot” counterparts. There are guys out there who would love to cross smoky rooms just to talk to us. But even then, when did being hit on in a dark club become the measure of how attractive a person is? The number of men who talk to you in a night should NEVER be a standard by which you define your self-worth.

What I’m saying should be easy to understand: be confident, ladies. Hold your heads up high. Remind yourself that the right guy is going to believe that you’re the sexiest, cutest, most beautiful woman who ever walked into his life. But you don’t even need to focus on that right now. College is the time to focus on yourself. Learn to love who you are, inside and out. It’s okay to love your body and your mind. Love yourself, because you deserve it. We all do.