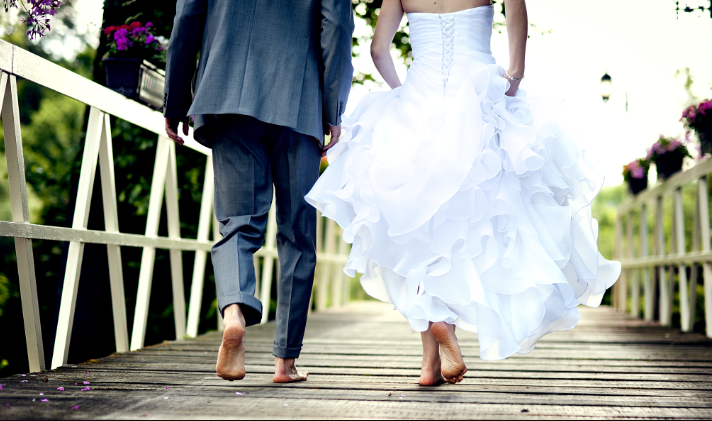 “Uh…what’s this?” I heard him mumble, as he tentatively held up a beige envelope.

I glanced up from my phone, silently praying to anyone listening that this wasn’t yet another bill for the subscription to Vogue I absolutely did not purchase (just look at me. I don’t do Vogue).

“What?” I asked, squinting in his general direction and noting the expensive-looking paper clutched in his fist. “What does it say?”

He took a deep breath before staring down at the letter like it was some sort of poisonous piece of commitment.

“It says,” he started, in a slow, confused voice, “Mr. and Mrs. Jonathan and Rachel Gustafson.”

It had all started a few months earlier when I came across a post on Facebook. Well, okay. That’s a lie. It had all started about two months into us dating when the psycho chime of wedding bells started ringing faintly in the back of my head, but whatever. The point is, I was in one of the many weird Facebook groups I’m a part of (seriously, I have an addiction), but this one? This one was a little more pathetic. It was a group aimed at people getting married. I would spend hours silently reading through posts, judging color schemes (pink and black? Really Debrah?) and mentally making fun of wedding dresses (why are you wearing a red ball gown, Stacey?!), like I was a pathetic girl in a wedding group who didn’t even have a ring.

Which is, you know, exactly what I was.

Still, as I sifted through the posts, I came across something that got my crazy-girl instincts’ attention. Someone had just gotten a signed letter from the president, congratulating her on her upcoming marriage. It was on a rich, buttery card, and was filled with lovely words of wisdom from the main man and his lady.

I had to have it.

Now, politics aside (if we can do that, considering we’re talking about a political office), I like the Obamas. I like their relationship, I like their family dynamic, and above all, I love me some Barry. The dad jokes, the charisma, the effortless good looks and large, ever-hearing ears. And the thought of receiving a signed letter from him, congratulating me on my marriage was almost too much to handle. I envisioned framing it and possibly photoshopping a picture of his face over my dad’s at our wedding. I imagined laughing when people asked if I know Barack, and comment about how he’s practically family. Actually, he could even show up. I mean, Tom Hanks has done it. I should probably save a few seats for them, just in case.

No, I wasn’t getting married anytime soon (as least, according to my naked ring finger). But I didn’t want the chance for the first president I actually paid attention to, to leave office without ever having the honor of congratulating me on my nuptials.

So, I did what any semi-sane girl who had been dating her boyfriend for awhile and was getting that four-year itch would do. I sent in a form saying we were engaged and promptly forgot about it.

So… I did a crazy-girl thing…

(Address has been changed to protect my identity and also make it seem like I’m maybe magical.)

In a dream world, I would have snatched that bad boy up from the mail, hidden it in my secret box with letters from exes and the stone I stole outside of Johnny Depp’s house, and taken it out once we were actually married. But, thanks to my goldfish brain, it didn’t even occur to me that the former president would throw me under the bus by saying “Rachel Gustafson” on the front.

So, naturally, things got a little weird after that. On one hand, we weren’t *technically* engaged yet. And when I say “technically” I mean not in the slightest. Sure, we had discussed the idea of marriage once or twice when I was drunk and emotional, but we weren’t exactly planning our colors or kids’ names. But on the other hand, I sort of told the White House that we were getting married. And while my original plan of a June 2017 wedding was obviously not happening, this time things were even more serious.

After getting over the shock of seeing my new last name, and him jumping in his car to “cool off” (meaning he was probably heading out to find me the prettiest ring of all), I started planning. Again. Because let’s be real — if the former president thinks you’re getting married and wishes you the best, it sort of means you need to book a venue.

So, last year, when I thought I was engaged and it turns out I wasn’t, it didn’t exactly work out. But this time? This time I have a feeling things are going to start to fall into place. I mean, considering that the former president will most likely be in attendance, I can’t exactly let him down. And *if* my maybe-fiancé decides not to go through with it, I have a feeling the Obamas would be pretty pissed. They’re all about family. And love. And having the ring bearer dressed up as a little security agent as pinned on my secret wedding board. We have to get married now. If not for us, then for Barack and Michelle. I just need to decide: summer or autumn of 2018? Actually, I guess first I need my husband-to-be to come back. He went in his car to drive around and “think” about four weeks ago and he hasn’t come back yet. Weird..