I Broke My Boyfriend’s Heart For No Good Reason 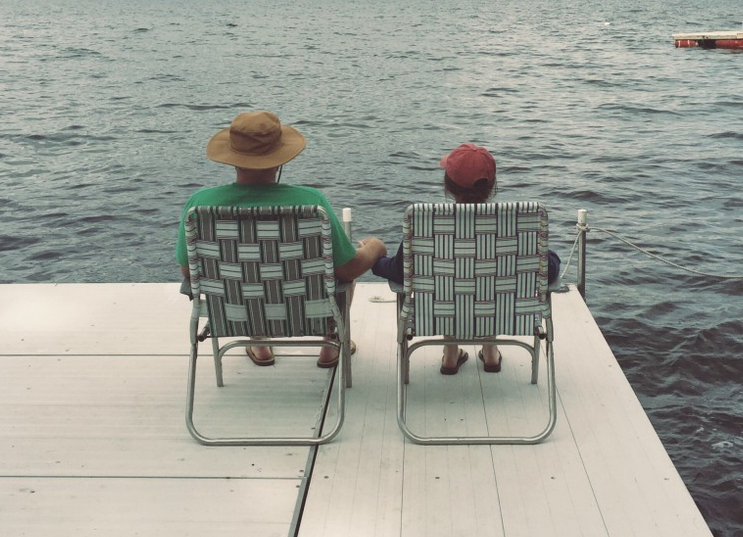 I took a swig from the handle of Burnett’s vodka we were all sharing, then handed it to Greg, who I’d been flirting with for two weeks. I watched him take a swig before he poured it onto my semi-naked, bra-and-boy-shorts clad body while I danced to the summer hits of the ‘90s on Pandora. I looked up at the stars and soaked it all in. This was one of the best nights of my life. I was totally uninhibited and carefree. I would remember it forever. Greg brought me back to the moment with a love tap on the ass, and together we slid down the waterfall into the creek to join our friends.

I screamed as the rocks scraped my backside and I came crashing into the cold water. My best friends cheered me on. I don’t remember any words, only laughter. And then Greg grabbed my waist, and pulled me in close for a kiss. I turned my face away from him.

“You know I have a boyfriend,” I said, disappointed in him.

“Yeah,” he seemed to scold me, “but you know you have a boyfriend, too.”

It was the single biggest blow I’d ever received. Because he was right. What was wrong with me? I loved my boyfriend. Why did I end up here? Never crossing the line, but walking right up to it, longingly staring at what was on the other side. I’d been with Tim since high school — for nearly three years — and Greg was practically a stranger. I couldn’t possibly have real feelings for him. Why, then, did I want so badly for him to stay when he walked away?

Summer came, and I was back home with my long-distance boyfriend. I brushed away the confusing thoughts of that amazing night at the creek, and worked on my loving relationship, purposefully willing myself back into it fully. Tim was perfect. He was kind. He was a gentleman. He went down on me, like, all the time. And he loved me. He loved me so much more than anyone could ever hope to be loved. And I was lucky. I had been a fool back at school, I thought, to even consider the prospect of being apart. We spent an incredible summer together, filled with laughter, and happiness, and true, authentic, over-the-moon, head-over-heels love.

And then I moved back into school a week before the semester began. Day two back on campus, I met Josh. It was the same, all-too-familiar thing all over again. I was upfront about my relationship status, but allowed myself to flirt with him, and with the idea of disaster. After a postgame at my house, Josh and I stayed up talking until 5am, and fell asleep together on my couch. I woke up that morning and knew what I had to do.

I called the most kind and incredible person I’d ever met, and I broke his heart.

It seems downright monstrous — to abandon love for seemingly nothing. But the fact of the matter was I’d wanted that nothing for three years, and I couldn’t deny it any more. I felt unfulfilled. Maybe if we’d met when I was older, we would have been together forever. But I wasn’t older. I was in college. I was only twenty years old. And I couldn’t live with the idea that all of the carefree, adventurous parts of my life — and nights like that night at the creek, that only happened because Tim was sick at school and had gone to bed early — were over by the time I was 17.

I didn’t leave Tim for Josh. Or for Greg. Or for any one guy. I left him for, well, a lot of guys. But mostly, I left him for me. I needed to be uninhibited. I needed not to have to check in with someone if I was going to be out past two. I needed to experience all the wonderful, crazy, and scandalous things that were out there, and I needed to learn the things I could only learn about myself if I was alone. I needed to be able to go to NOLA and flash my tits if I wanted to, and know that nobody could be mad at me for it. Except for, like, my parents, but they were mad at me all the time, so who cared? I needed to make out with a stranger. I needed to be able to wingwoman my friends latenight at a frat house, even if I wasn’t interested in anyone, without feeling guilty. I needed to have first dates. I needed to feel that excitement that only comes from talking to a new guy. I needed excitement, and uncertainty, and lots of shameless attention.

I just…needed to be single. Because if I never did, I would have resented him forever.

Not everyone needs to “sow their wild oats.” But me? I did. I needed to have a period of time where I could do whatever I wanted, with whoever I wanted. I tried, for so long, to suppress it. But if you have that lingering feeling that you’re missing out on college, no matter how in love you are, no matter how you fight it, it never goes away. Ever. In fact, the more I tried to suppress it, the stronger I felt it, and I couldn’t live the rest of my life knowing that I’d never truly gotten to just be me — wild, carefree, adventurous, not-tied-down by anyone or anything, me.

Eventually, of course, I tired of being a party girl. I got it out of my system, completely, and no part of me feels the need to dance on tables or make out with a stranger in a bar. It seems to me, like it’s the kind of desire that can only be killed by having been met. Some people will argue that I gave up something substantial for something temporary, and that ultimately, it wasn’t worth it. I’d like those people to remember that argument when they are 40 years old, divorced, and depressed because they wasted their hot years on some dude who doesn’t want to pay alimony, while I am in a loving relationship, and have no desire to “see what’s out there,” because I already know.

In the end, I just sacrificed one happily ever after for another. I got closer with my friends, because I spent time with them instead of him. I was there for all of the funny stories and amazing nights. My life, as a whole, was filled with fewer fights about whether one of us was dancing with someone at a frat party, and less stress and concern about making someone else happy instead of me. Caring about someone else’s feelings more than or even as much as your own is a very grownup level of selflessness, and I wasn’t done being immature yet. So I chose me. And frankly, I wouldn’t change choosing me over him for anything in the world..