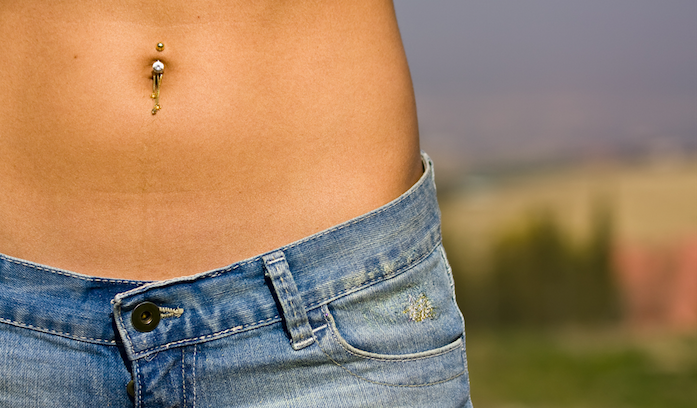 “Well, guess what, Mom?” I shouted, storming into her bedroom in a rage, flailing my hands around. “I don’t fucking care! Look what I did,” and with a final, dramatic gesture, I pulled up my shirt, revealing the shiny new bar that went through the red, inflamed skin right above my belly button.

I had just turned eighteen and was in the heat of a battle with my mother after not getting my way. I’m not going to say who was in the wrong here (me, it was me), or what the fight was about (the fact that my mom wouldn’t let me buy a pole dancing pole for my dorm room in the fall). The point is, I was spoiled. I was mad. And I wanted to rebel.

So, I did what any self-righteous 18-year-old who didn’t get her way would do. I went to a trashy tattoo parlor, got an even trashier piercing, and hoped that would show my parents who was the boss.

Naturally, upon seeing my fresh piercing, my mother did what any sane mother would do. She laughed in my face, told me I was an idiot and walked out of the room. The next few weeks were spent spraying my wound with salt spray, sleeping on my back, and wondering why the fuck I put myself through this agony. Still, once my piercing healed, once I realized my mom was 1000% correct in not letting me put a pole up in my room, and once I adapted to the piece of metal through the middle of my body, I started to grow a special kind of fondness for my little rebellious reminder.

That was a good *cough* couple of years ago *cough,* and in that time, I have since grown up. I have gained and lost the freshman 35 (I mean, 15), I’ve kissed a few princes and blown a few frogs, and I’ve become a whole new person. You know, sort of. Minus the bitchy demeanor and abrasive personality. But I mean, come on. I like, colored my hair burgundy once. That counts as change.

That point is, I got older, wiser, and a little fatter. And while a lot of aspects of my life changed, one thing remained the same —— I kept my belly button piercing firmly clamped in that little patch of skin. While I’ve lost the top ball that screws in more times than I can count, I still, to this day, have not lost the love for my piercing.

The only problem? Belly button piercings are no longer what they used to be. I mean, back in the day (she said, as she adjusted her dentures and got out her walker), belly button piercings were the thing. It was the way you told people that you were lowkey a slut without actually telling them. It said, “I’m a bad girl, but I also realize that I’ll most likely marry a mid-level salesman someday so like, let’s not get too wild.”

I know all of this. But the thing is, I just can’t say goodbye. No matter how much weight I gain, no matter how outdated they become, and no matter how old I get, each and every time I see that sparkle on my navel, I can’t help but be happy. I can’t help but feel good. And while a part of me wonders if maybe, just maybe, I would have become a hot ass stripper named “Candy” if I would have gotten the pole, I’ll settle for a semi-responsible adult with a trashy piercing and lots of scar tissue. Same thing, right?.