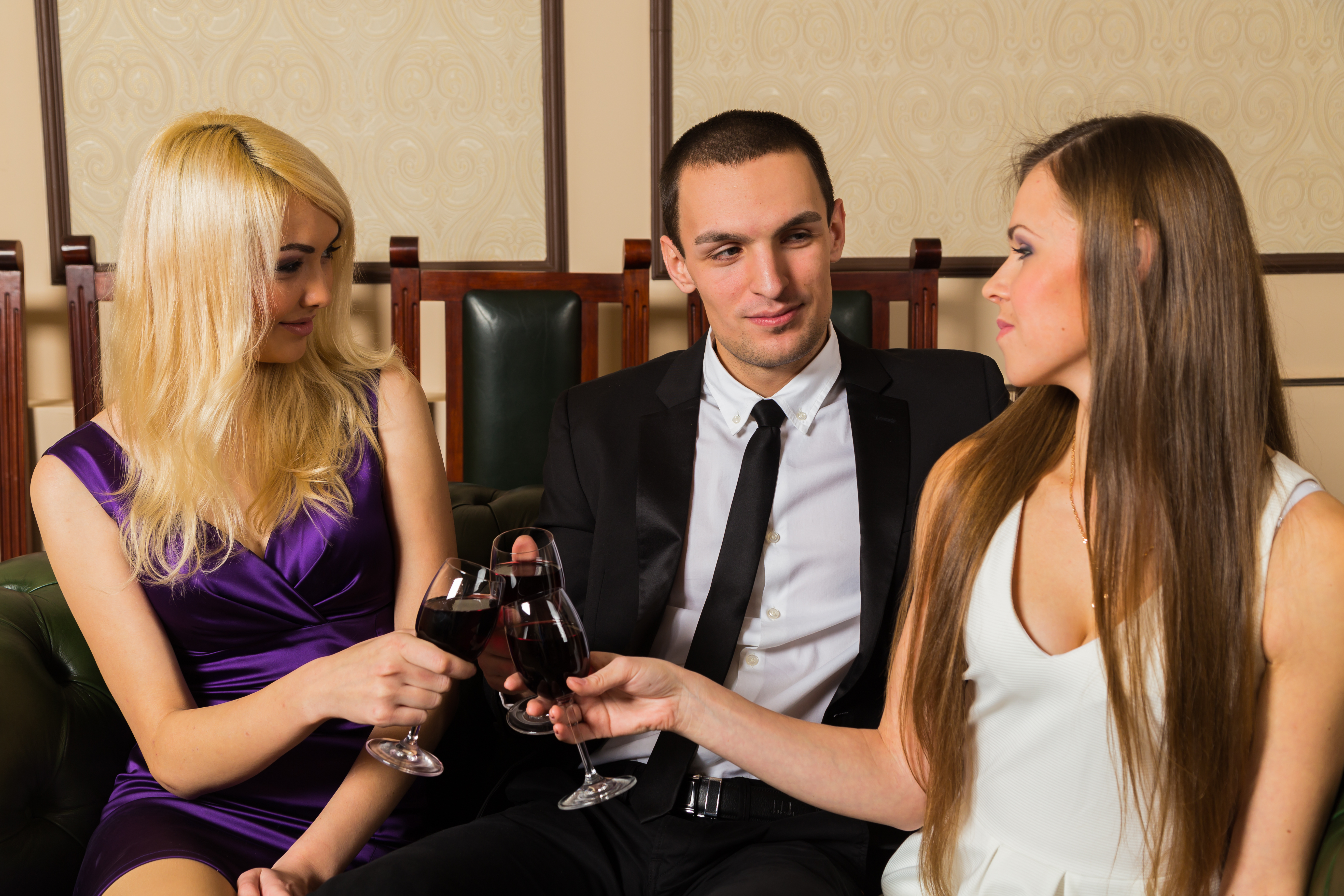 The first thing you should know is that my big is hot. Like really fucking hot. I consider myself above average, but definitely more cute than hot. My big on the other hand is a smoke show. I consider myself straight, but I can appreciate hot girls and I like making out with them. I’ve always been open to new experiences so when the opportunity presented itself, I didn’t really have to think about it too much.

It was just a casual Monday when it all began. We got dinner at this gourmet salad place, pretended leafy greens were enough to fill us, and then went back to her place to drink some wine. Any time we hang out, we get carried away with our alcohol intake, and this was no exception. A few glasses of wine turned into almost an entire box of Franzia sunset blush. We were just sitting there, laughing, talking, and bitching about our uppity standards chair who could really use a good dicking to help mellow her out, when this guy my big hooked up with on and off texted her. He wanted her to come over. When she told him she was with me, he said “That’s fine, bring your little. She can hook up with my roommate.”

Being the considerate big she was, she turned to me and asked if I felt like having sex that night. Having the ravenous sexual appetite that I do, I said sure. I’d hooked up with the kid’s roommate before. He was bomb in bed, and who was I to turn down an orgasm?

We quickly got ready and headed over to their place. My big’s boy let us in and offered us some wine. His roommate hadn’t come home from the bars yet, so he suggested we all hang out in his room for a little. To this day, we aren’t sure if the roommate ever knew we were coming over or if her fuckbuddy had orchestrated what was to come from the beginning, but it doesn’t really matter.

We drank in his room for awhile before the conversation turned to my new nipple piercing, which of course led to him wanting to see it. I love my boobs, so it didn’t take me much convincing before I was TOFTB. He hesitantly reached out to touch them, afraid that any wrong move could ruin what was about to be the best night of his life, but when he received no objection from either of us, he really made his move. What started out as good, old-fashioned second base led to his mouth on my boob. When finally, he suggested that maybe he and my big should take their tops off too, so I didn’t feel left out. I’d make fun of him for not being smooth. But it worked.

There we were, drunk as fuck, and naked from the waist up. He was kissing my nipples, and my big was left out, so I did what any good little would do. I started making out with her. It was something we’d done tons of times before, but we both knew this was different. She pulled away for a moment, and we locked eyes to mentally ask each other if we wanted to do this. I nodded at her, and then we started taking our clothes off as fast as we could. In our best attempts to be sexy, we had the boy lay back and proceeded to give him a dual blow job.

That shit was not easy. You’d think one woman takes charge of the peen and the other commands the balls, but that honestly just leads to bumping heads. A lot. And while you may think it’s hot for both of you to lick up the sides, it’s still just licking a penis, which is really not that much fun for anyone. Except him, I guess. It was time to get the show on the road.

I hopped onto his torso, and my big onto his face, and the two of us made out like it was life or death, until he suggested we switch positions — a normal part of the sexual experience, but one I hadn’t anticipated, nonetheless. He got behind me, and I found myself in an eiffel tower situation, except at the north end, there was a vagina. This was a pivotal moment for me and for the rest of the night. I could just continue to have a front row seat while I watched my big touch herself, or I could commit. So, I grabbed her hips, pulled her in, and made his night. From there, the hookup lasted for about another hour. I think we ran through every conceivable position I could think of, including some exclusive girl on girl time while he recharged.

When we woke up the next morning, it very easily could have been so incredibly awkward. It could’ve ruined my relationship with my big, but it didn’t. She looked over at me, giggled, kissed me on the forehead and said that she’d had a blast. I was, and still am, so in awe of her. I was internally freaking out, afraid she’d be weirded out by what we’d done, but she was just honest. She had a great time, I had a great time, and the boy sure as hell had a great time. She’s my best friend, and if I’m ever going to go south of the border on a girl, I’d rather it be the girl who knows everything about me and makes me feel confident. So yes, I had a threesome with my big that night, and people found out, and people were pissed about it. But at the end of the day, I have no shame in what happened. In fact, we liked it so much that we did again..

Champagne Showers is a contributing writer for TSM. She is your typical Northern Diva. If curse words, sexual content, and drug use offend you, then bless your heart. CS will continue living the life you're too scared to live. email her at: [email protected]