I Hate My Big 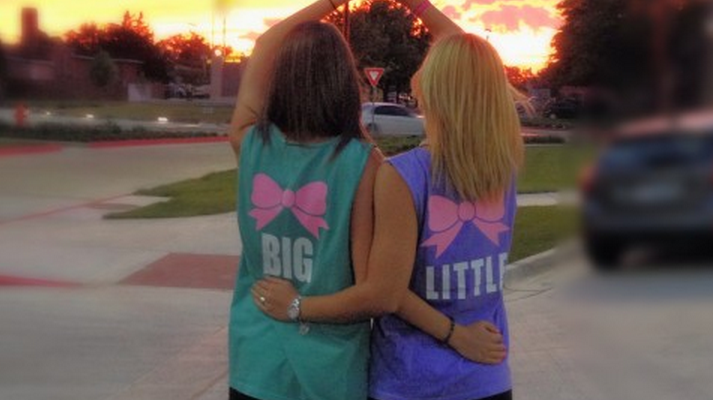 It’s almost little season and just thinking about my big/little reveal makes me cringe. I was certain I knew who my big was before reveal. She seemed to be pulling it off flawlessly with just the right mix of distance and interest. She was my definition of a perfect big sister: gorgeous, sarcastic yet bubbly personality, and had gotten fired from her part-time job because of alcohol. I had decided she was the best person to usher me into Greek life. We would live out the picture perfect big and little life for the next few years before I was her maid of honor and she was mine. I had it all planned out. So imagine my surprise when my big was a girl whose name I didn’t remember.

It’s okay, I told myself, she seems pretty cool. I mean she’s a little more hipster than I am, but I’m into yoga and that’s basically the same thing. I channeled my excitement into getting to know her. My big-little fantasies weren’t destroyed, it would just be with this other girl who I couldn’t wait to get closer to. And then, just when I thought it would be fine, she revealed herself to another girl in my pledge class. Twins, I thought. Tricky, but manageable. Three is always more fun. We’d be like the three musketeers, but instead of swords we’ll just have a lot of shots. I stayed optimistic as we took hundreds of photos together, and when she asked when I was free for a coffee date, I knew that everything would be alright.

I arrived on time for our date, but I didn’t see her, so I ordered and sat down. I pretended to be engrossed in my phone, which is difficult when you’re also trying to slyly watch the door. Maybe I should text her. I’ll text her. Five minutes later, a ding alerted me that she “was soooo sorry she had forgotten and she was just really busy today, but we could do it tomorrow?” Understandable, I told myself, we have the next three years together so I’m in no rush. I went about my day, forgetting the little confusion from earlier. It wasn’t until I was scrolling through Instagram after my evening shower that I saw it. A picture of her with my twin. “So glad I got to spend the whole day with my little! #blessed” Uh…what? I no longer felt slightly stood up, I felt actually stood up. By my big. The one who was supposed to tell me I was too good for anyone who stood me up. THAT was what she was too busy with? Furious, I did what any other angry freshman would do. I texted the girls I was closest too and badmouthed the shit out of my big.

Turns out word travels fast. Honestly, I should have just talked to her about it. But I didn’t, so three months later we were involved in the biggest rumor feud since one of the girls got engaged to another’s ex. I tried to ignore her, I really did. I understand that not everyone is going to get along, but I was so mad about losing the thing I had most anticipated, that I couldn’t truly let it go. Then the rumor came that our president wanted to speak to me. Apparently, I was going to get in trouble for a lie created by none other than my big. Finally fed up, and in the midst of too much drama, I decided I would go inactive. Greek life just wasn’t for me, I decided. It was full of fake girls who didn’t care and I had spent enough time and energy on this particular group of them. I skipped my first formal and pulled away from everyone until the year ended.

As summer came, I went home and tried to enjoy my old high school life that I had left behind. Old friends, old traditions, and new places took up my time, but they all ended up reminding me of things that I had done with other sisters throughout the past year. Soon I realized I was the obnoxious girl who couldn’t shut up about her sisterhood, even though I thought I didn’t want to be a part of them. I realized that my sisterhood contained so many girls who cared about me, despite whatever was happening with my big, and they had given me so many memories that I would miss. Distance really does bring perspective, and so I walked into the next year with my dues in hand.

As much as I hate groveling, or admitting defeat, I pulled my big aside after a long day of recruitment and told her why what had happened had hurt me. I understood what I did was wrong and explained I was sorry and that I didn’t want the rumor fest to continue. She apologized, too, and though we have never become friends, we finally quit fighting. I know that I’m not the only one in my sorority that has had trouble in big-little paradise (though mine has probably been the messiest), and I’ve seen too many girls make the mistake I almost did by walking away. In fact, not being attached to my big let me choose which other older girls became my mentors, and allowed me to branch out in a way that I probably wouldn’t have if I had only relied on her. It wasn’t until I almost gave everything up that I realized just how much I was forfeiting because I couldn’t get along with another girl. I wish I had never let it get to me in the first place. Because the truth is you’re going to walk into your sisterhood with big ideas and expectations, and it’s not always going to match up to reality, but that doesn’t mean that it’s not worth it..