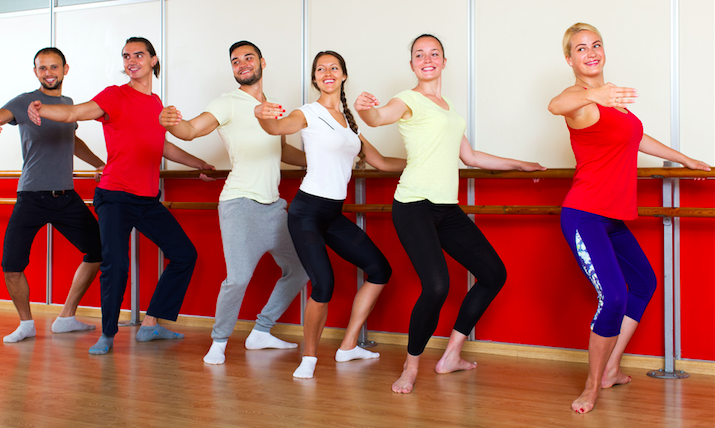 My best friend, Alexa, and I have always been the same size. In high school and college we were the classic, “not fat but still doughy enough to sometimes feel self-conscious in a swimsuit or crop top.” We weren’t overweight, but we weren’t skinny, fit-bitches. Sure, we’d go to the gym and we were constantly fifteen shades darker than our natural skin colors thanks to the tanning addiction every teenager in Florida has, so we were hot in that sense. But the truth is, we were bangable, just not total smoke shows.

And then, we graduated college. She moved to Chicago and I moved to Austin. She became a vegetarian (because she never really ate meat, not because she’s annoying about animals) and I became a firm believer in having queso at every meal. She started running marathons and I got Netflix, Hulu, Amazon Prime, and HBO Go so that I could watch marathons in my spare time.

In essence, Alexa became a babe and I became a sack of trash. We were still best friends and we still loved each other, but she was skinny now and I was, well, not. So when I booked a trip to visit her, I shouldn’t have been surprised by what happened when we were planning our days together.

“So I had signed up for a 9 a.m. barre class on Saturday,” she had texted, much to my dismay. “Do you want to come? If not I’ll try to cancel but they might charge me.”

Fuuuuuck, I thought, staring at my screen. No. No, I did not want to go to a workout class at 9 in the fucking morning. I get winded walking up the three flights of stairs to my apartment and that’s usually the extent of my exercise for the day. In case you don’t know what Pure Barre is (or Bar Method or whatever other, clever name a studio has chosen for a barre workout class), it’s a low-impact exercise class that utilizes ballet elements that (apparently) gives you a lean, yet hot, body. So naturally, the thought of plié-ing next to a whole bunch of hot girls for an hour sounded like hell.

But on the other hand, I was visiting her. She was getting married. And it was only 55 minutes. How bad could it be?

So after she assured me that it was easy, that you (and I quote) “don’t even sweat,” and that we could get brunch right after because we wouldn’t look gross, I agreed. I used to be a dancer so I figured if anything, I’d get an ego boost by showing all of those bitches up and then I’d gorge myself on french toast. Perfect plan.

Except that when my alarm went off at 8:15 Saturday morning after a night of drinking more rosé than we realized, I knew it was going to be rough. I couldn’t decide whether I was still drunk or almost-hungover, but as we clamored into the car to head to the class, I had a feeling things were going to be bad. Really, really bad.

We trudged into the studio and a perky woman greeted Alexa by name and handed me a clipboard. As I answered questions about my health she talked about how much she loved tacos and pizza. I glanced up in time to catch a glimpse of her abs as she threw a shirt on over her sports bra.

Upon saying that I wasn’t pregnant (thank God) or engaged (don’t remind me), I handed the forms back and headed into a room filled with blonde girls in Lulu.

“Okay put your water here and let’s go get the equipment,” Alexa said, pointing me to a place in the corner of the room. At least I’d be out of the way.

“So you’re going to take one of these,” she said as she handed me some sort of giant rubber band from the back room. “And one of these,” she added passing me a ball, “and you need weights,” she said looking at me. “I usually do two and four-pound ones but…” she started, not knowing whether or not my chubby arms could even lift up four pounds.

“Yeah I’ll take those too,” I said, not about to be showed up. She handed me the weights (shit, they were heavy) and I followed her back into the studio only to be greeted by the peppy instructor once again.

“Okay so Rachel, right?” I nodded at her, trying not to give away how much I didn’t want to be here. “Okay! Hi,” she smiled sitting next to me, her small frame making me feel like a beluga whale. “So I just wanted to talk to you before we start! So the class is super fun, and it’s all about small movements, so think of everything as just inch increments,” I nodded at her as she told me to keep an eye on her and that she’d walk around to help.

Finally, being unable to contain myself, I spoke up, “I actually used to dance a lot. And this is ballet based, right?” I felt my ego swell as a look of “a-ha” crossed her face.

“Yes!” She squealed, getting up to head to the front of the class. “Well then, you should be great!”

Little did I, and my alcohol-inflated confidence, know, I had made a terrible, terrible mistake (bum bum bummm).

The truth is, from the very start of the class I was not great. I was not even close to great. Five minutes after our little chat, sweat was already running down my back. My face was blood red and I was feeling dizzy as I tossed the free weights on the ground, unable to lift them any longer. My face glistened and my breathing sounded like an old, run-down car as I wheezed my way past the first few exercises. I willed my heart rate to slow down as I attempted to plank, only to have my arms give out. Finally I just laid on the floor like a dead animal while the girls around me inhaled together, holding their abs in and “tucking their tushes.”

Fuck, I was out of shape. When we stood up again, I made eye contact with the bitch who tricked me into coming here.

“This is harder than usual,” she mouthed at me, as her skin started to shine as well.

“Fuck you,” I mouthed back, as liquid poured from my temples and blinded me.

I’d love to say exactly what happened in that class, but I must have blacked out due to the agony and torture I experience. It comes back in flickers, like a nightmare too traumatic to forget. I remember the instructor coming up to me and telling me to try to lift my body using my ab muscles. I recall having to put my legs in the air for an exercise but being unable to hold them up for longer than a second. I remember laying on my mat, shaking my head with tears in my eyes as the instructor told us we had a few more stomach exercises left.

By the end of the class, my mind, body, and spirit had been totally completely destroyed. The last few minutes I just curled up on the floor and hoped that no one would step on me as they finished their cool down. I didn’t care that I looked like a tub of lard rolling around whimpering about the pain. My body was soaked and my limbs could no longer function. Any notion I had that I wasn’t a useless ball of fat and pizza rolls was long, long gone.

As Alexa and I walked (well, she walked. I hobbled and complained) to the Starbucks next door (yes you have to go to Starbucks after) I felt like my entire body had become unhinged. As the day went on I was unable to walk up the stairs without gasping in pain. The next morning my body was more sore than it had ever been in my entire life, including those weeks at dance camp in high school when the instructors think they’re training girls for the Army instead of just for a competition amongst 14-18 year olds.

In short, Pure Barre was, without a doubt, the most painful, exhausting, ego-deflating thing I had ever done. It wasn’t because people were mean (everyone was actually super nice) and it wasn’t because my friend was better than me (turns out she’s been doing barre for awhile and spoiler: that’s how she got so hot). It was because every time I moved my body, muscles I didn’t know I had screamed in absolute agony. I felt tears in my eyes as I got a cheery follow-up email from the franchise in my inbox a few days later. Why did they have to talk to me? I told everyone who would listen how miserable it was. I literally cried when I tried to put on my shoes this morning.

Barre class was and is hell. It was worse than hell because it tricked a nice, lazy person like me into going in there. I hate Pure Barre. I HATE IT.

That being said, I’m going to sign up for an unlimited plan for a month because like, if I can do that three times a week and end up looking like Mila Kunis, it’s worth ugly crying on a mat for 55 minutes..