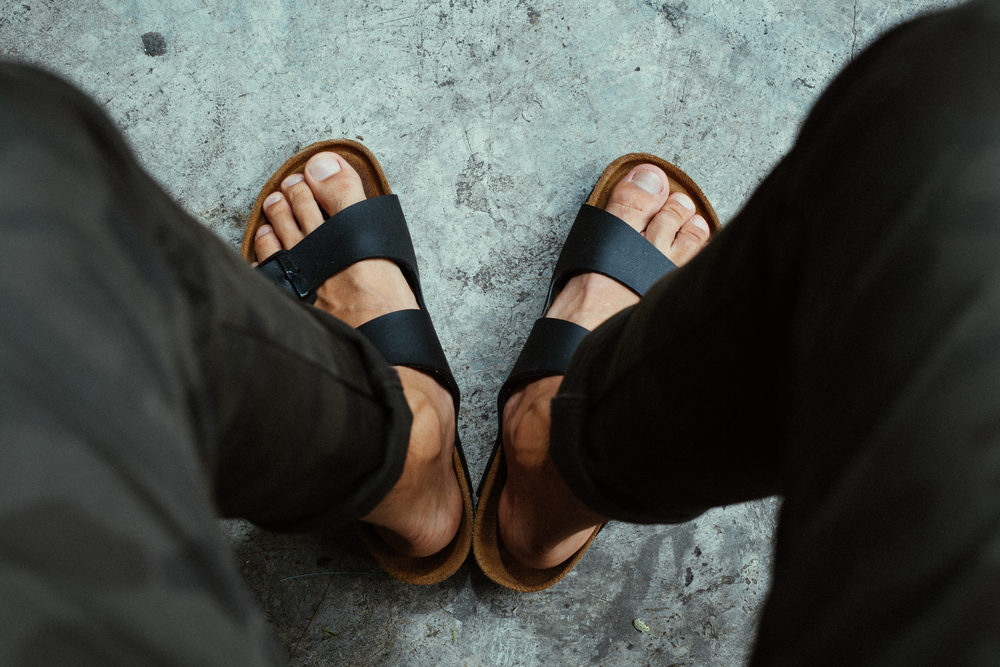 Boobs are awesome. All creatures of the universe can all agree on this fact. At one point, we depended on them for survival. Now that we have matured, we can appreciate them for how jiggly they are. They’re just fun. There are no such thing as ugly boobs. However, boobs have been forbidden to bras for centuries, while other body parts are free to roam about the earth, both literally and figurative. I’m talking about feet, specifically of the male species. While we are all in accordance that boobs are one of the best body parts, we can all get behind the idea that feet are one of the worst body parts. Something about them are inherently alien-like. They touch whatever is one that ground. All of it. Unless you have the ability to levitate, of which I am calling BULLSHIT on. While I’m wearing a medieval torture device so as not to upset the elderly with my tits, dudes are strolling around in man sandals (hereinafter referred to as mandals). I will not stand for this injustice.

It seems the main issue is that boobs are seen as offensive while feet are not. As previously stated, there are very few, if any, who object to boobs. They are vastly enjoyed just like bubbles or rainbows or anything that is good and pure. On the other hand, there is a wide pendulum swing between different opinions of feet. It swings from a phobia to a fetish. Some people are literally fearful of feet. The mere sight of them makes them queasy. And some people want to do some nasty shit to someone’s nasty feet. If someone is turned on by boobs, they are called human. But if they are turned on by feet, they are a social pariah. So wtf is up for real?

Now, I’m not trying to pick on guys. It’s not their fault that they are born with ghastly feet and gnarly toes. I pity them, if anything. When they trudge past me in their mandals, I can sense their shame. But I don’t feel bad for them when I’m the one who has to look at them. They would literally pay money for a peak at a single ta-ta. Just one ta. A solitary ta would get them through the toughest of days. So in some way, I’m looking out for them. All I’m looking for is a fair trade. A tit for tat type of situation. Cover up the feets and we’ll free the teats. It’s a win-win for everyone.

Not everyone is going to jump on board, and that is fine. But I am putting my perfectly pedicured foot down. All I’m trying to do is make the world a better place. If you’re not ready to make a change, just first consider it. Consider a world where you can walk around your campus and not fear the frat bro feet. You can sit next to whoever you want in class without being distracted by Jim sitting next to you airing out his toe jam. The simple tradeoff is no more mandals for no more bras. There are only positive aspects to this proposal. Earth would be a better place with less man feet and more boobs, and that is an inarguable fact. In such a divided world, all I can hope is my humble idea can unite us as a people again, and no one will ever have to catch a glimpse at a fugly foot forever..