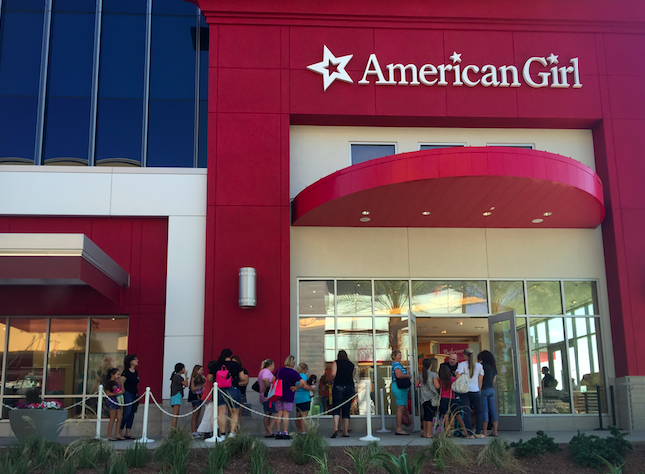 There were a few important musts to growing up as a little girl in the early to mid-’90s. You needed to rock jelly shoes and velvet dresses. You needed to get into petty fights that absolutely ruined friendships when your brother’s friend’s annoying sister stole your favorite Barbie (I never forgot, Ashley). And, obviously, you needed to have an American Girl Doll.

Now, anyone who’s anyone knows that growing up, having an AGD was tops. It was necessary. Just like needing a Razor scooter and then a Razr phone later in life, getting an American Girl doll was just something you had. to. have. If you didn’t? It was like social suicide. And holy shit, I spent months picking out my dream doll. At first, I wanted a “my twin.” You remember those? They literally made dolls that looked exactly like you, which is actually pretty creepy and probably why that whole idea got discontinued.

But I didn’t care. I wanted one. I cut off a lock of my hair to send in. I begged my mom time and time again to get me a doll that looked just like me and would most likely kill me in my sleep. But, after perusing the catalog (not the website, that’s how old this shit was), my parents thought it was absurd to pay a few hundred dollars for a doll with blonde hair.

So, upon breaking the news to me, I did what I do best — I threw a fucking tantrum. I cried and I screamed and I begged. But they stood their ground, and eventually, I had to accept that getting a twin doll was not in the cards for me. That’s when I decided to just settle on a normal American Girl Doll like a peasant.

That’s when I fell in love with Samantha.

She was the pale-skinned, dark-haired doll whose backstory was basically that her parents died and she had a shitton of money. Her bedroom looked like fucking heaven and I shit you not, she had a specific outfit for catching butterflies. That’s all the outfit was for. She was living my dream life, and I had to have her.

After assuming my parents would be fine spending the mere $100-ish on her (then the subsequent $2,000 on all of her accessories), I put her at the top of my Christmas list and called it a day.

After opening all of my presents that year (spoiled, much?), I came to find that my parents didn’t get me the American Girl Doll of my dreams. And year after year, holiday after holiday, I’d unwrap all of the gorgeous gifts only to find that Samantha was not among them.

She was my dream girl. The plastic person who would have truly completed me. The doll that got away. And honestly? I think my life probably sucks because I never had her.

I mean, the point of these dolls was to teach you about history, make you a more philanthropic person (all of these dolls were super into helping people, according to their accompanying books, most likely full of lies), and make you understand the importance of womanly things, like being a person of substance in society and knowing how to dress/groom yourself.

But, of course, since I never got Samantha (or any AGD for that matter), it’s no wonder why I am a total fucking shitshow. I mean, I know nothing about history. I’m not saying that to brag because, frankly, it’s embarrassing. But I never had a doll to make me feel like learning about the past was fun! All I had was boring, middle-aged guys who droned on in front of the class while I tuned them out and flirted with the other losers who sat in the back. I lied about my community service hours in my sorority so I could go on formal, I have yet to figure out how to properly contour my face, curl my hair, and put an outfit together that doesn’t make me look like a literal potato sack.

I am, in fact, a fraud. A failure. A mere shell of a person. And the reason? I never got an American Girl Doll to teach me how to properly brush my hair or the importance of wearing a specific outfit to go catch butterflies, when I tend to wear the same pants for five-ish days until they start to smell like a stray dog that rolled around in shit then baked in the sun.

The point is, all you bitches who got American Girl Dolls growing up, I hope you enjoy selling tea detoxes to your 100k Instagram followers and living the true AGD lifestyle. You can pin your abs, your mermaid hair, and the business you started “from the ground up” on one thing and one thing only: The expensive ass doll you got where you were too young to realize that spending thousands of dollars on a doll was, in fact, absolutely idiotic. Still, if you’ve got a Samantha you’re looking to sell, I know someone who’s in the market. I’ll even listen to your pitch about your teeth whitening system first..