In Defense Of Chandler Bing 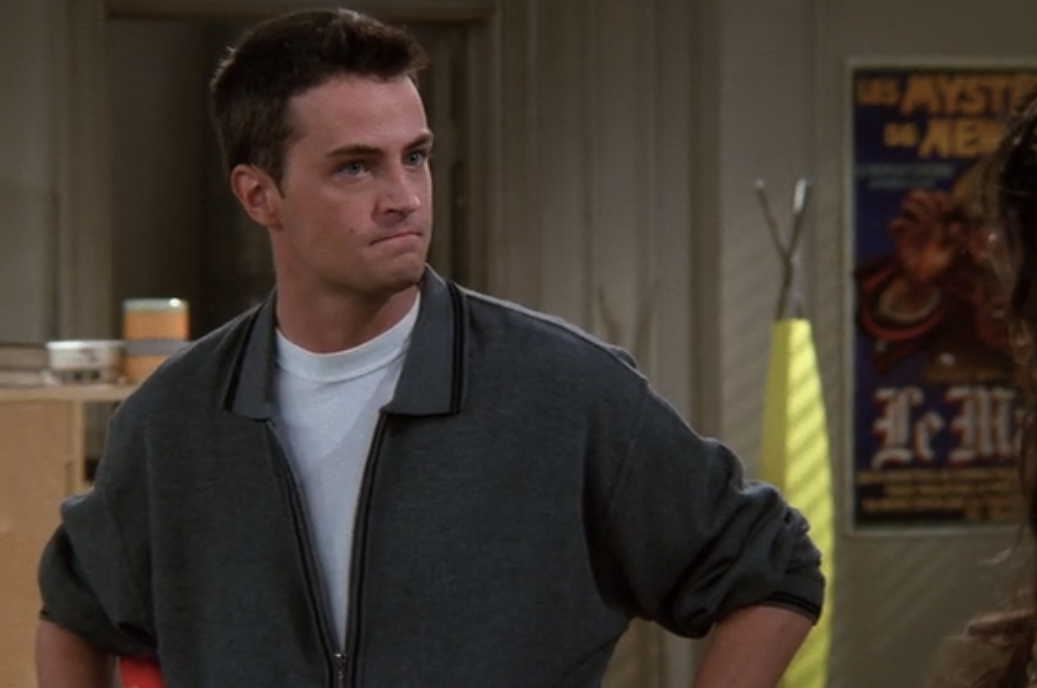 I’m mildly obsessed with Friends. I’ve made my way through the series at least ten times, and my friends refuse to watch with me because I talk along with the characters. I just love the dynamic of the group, and binging the series is probably as close as I’ll ever come to living in New York and having six best friends.

But one thing I can’t stand about the series is the amount of shit Chandler Bing gets on a regular basis. There isn’t one episode when his friends don’t rag on him for being boring, or awkward, or having shitty luck with women and potentially being gay. It just doesn’t make sense to me. It’s not like he’s ugly. Young Matthew Perry is hot, there’s just no arguing it. Sure, he put on a little poundage when he recovered from his crippling cocaine addiction, but the dude is still a catch. He’s funny, lovable, and blatantly honest about his life. I just don’t understand why he’s the butt of every joke, and why it’s common knowledge that he has no game when it comes to women. In real life, the guy would have no problem scoring a Monica. I can appreciate a beautiful lady, but she doesn’t have much on the Chan Man.

Not to say that Chandler doesn’t have his faults. He’s obviously fucked up from the chaos that is his parents’ marriage and subsequent divorce. He’s snarky and sarcastic, which I realize is a turn off to people who don’t share my dry, depressing sense of humor. And sure, he’s a little bit dorky, probably because his job has to do with numbers for the majority of the series and anyone who works with numbers living simply cannot be trusted. But everybody has faults, and his are pretty minor when you consider Rachel’s materialistic narcissism, Monica’s crippling OCD and baby fever, or Joey’s downright stupidity. Out of the whole gang, I maintain that Chandler is one of the best.

For one thing, Chandler is one of the only characters to have a consistently good financial standing. He’s always lending Joey money, and even manages to dish out a good amount of cash when Monica’s parents burn through her wedding fund. Even though he bitches about his job, there’s only a small amount of time when he’s unemployed. Who doesn’t love a guy with good financial sense and a strong work ethic?

Also, every time he lands a girlfriend, he treats her really well because he can’t believe his own dumb luck. Which doesn’t make sense to me, because he doesn’t end up with women because of luck; he gets them because once you get past his hard exterior, he’s actually incredibly caring. Think about the lengths he reached for Kathy, even when she was dating Joey, which basically killed him. Or how hard he tries to keep up with Monica’s crazy antics, even though most men would call it quits the second she starts going apeshit over people tracking a little dirt in. Why is it that he thinks he’s lucky to land any girlfriends, especially when one of those recurring women was fucking Janice, the bane of my existence?

Maybe I just love him because he’s “hopeless and awkward and desperate for love,” which is cute in its own little pathetic way. Whatever the case, I just don’t understand all the hate. Chandler Muriel Bing, despite his incredibly unfortunate middle name, is a total fucking catch, and we all could (and probably have) done much, much worse..