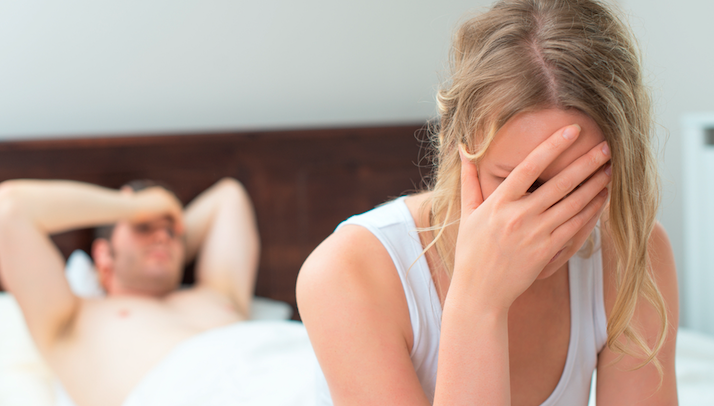 We all complain about our periods, but we’re so abstract about it. We’re too lady-like. We all have the same problems, but we refuse to get into the nitty gritty of it. It’s time to dive straight into the red river and talk about the real problems with our period. Not just cramps, not just mood swings, the disgusting, unspeakable, stomach-turning things that happen to us monthly.

Waking Up Amidst A Murder Scene
Just when you think the coast is clear, you put on your favorite light pink thong, and you get this weird feeling. Did I just get my period or did I not wipe well enough? Nope, you just got your period. Hard. No warning, just waterfalls of blood. But if there is one thing I am confident in, it’s the power of hydrogen peroxide. That magic potion can get all of the reddish brownish blackish colored syrupy mess that is seeping out of your body. Every pair of underwear that I own has at one point been saturated in period, but you would never know it. My Dexter-like abilities allow me to clean up blood out of every article of clothing that I absolutely ruin once a month. It’s a never-ending cycle (no pun intended).

Your Brain Wants All Of The Food, But Your Body Doesn’t
All you want is to stuff your face with food, but as soon as you so much as take a sip of water, you body is ready to full on ralph. Your stomach and your brain have to have some sort of chat, because this incongruence is detrimental.

Girls Poop, Women Shit
Whoever came up with the rumor that girls don’t poop was a master of fabrication. You get to bleed, and on top of that, your entire bowels evacuate. Sometimes, your tampon comes halfway out and you have to make a decision: are you going to pull it out or just push it back in? When you wipe, you use thrice the recommended amount of toilet paper, and you have to be extra careful that you don’t accidentally get shit on the string. It’s hard to feel pretty, or even clean, which just throws your whole week off.

Disappearing Tampons
The string to your tampon is never where you left it. You gotta dig around for a while until you peel it off of your taint. The even more horrifying incident is after you pull out a tampon and you look down and there’s still a string hanging. You put two in by accident. You yank it out at fast as you can as you do the math in your head, trying to figure out if it was in there long enough to give you Toxic Shock.

Fuckin’ Pads
As if tampons aren’t bad enough, let’s chat about pads. For those of you unfamiliar, pads are basically the crotch region of a diaper that you try to attach to your underwear, but when you pull up your pants, it folds back in half and the sticky part adheres itself to your skin. Then you have to slowly peel it off of your body to make sure you keep the stickiness and your labia in tact, and then stick it on your underwear. Once you got that figured out, you can spend the day sitting uncomfortably, lest blood will seep through your pants and onto the chair. Pro tip: don’t you dare sneeze. Bad things will happen to good people.

So let’s cut the crap about chocolate cravings being the worst part of periods. It’s way, way, way, WAY worse..