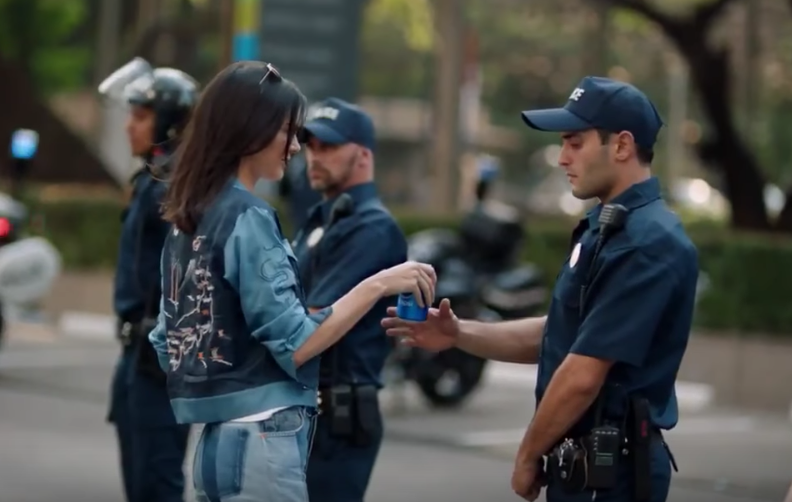 It’s not. Pepsi is never ok. Especially after their new commercial that they released yesterday starring everyone’s least favorite Kardashian, Kendall Jenner. It was definitely not ok.

They open with the song Lions by Skip Marley and a guy playing the cello, which doesn’t make sense because there is no cello in the song. Then flash cut to the most generic protest ever. The signs say lukewarm shit like “Join The Conversation” or just a big peace sign. There are people making out in the background of one of the protest shots. Because, you know, nothing gets you horned up quite like a good protest. Flash cut to a girl who is circling pictures with a colored pencil to show her passion. Then the protest just happens to be going down the same street that a blonde (?) Kendall is doing a photo shoot, Cello Guy is practicing, and Picture Girl is drawing on pictures. Then, the sounds of the parade, I mean protest, forces them to join the movement.

Picture Girl goes to take pictures and Cello Guy straps his cumbersome cello to his back and walks into the crowd. There are literally break dancers performing. Unless they are in the movie Footloose and protesting the illegality of dance, this makes no fucking sense. Cello Guy gives Kendall a weird head nod, to which triumphantly rips off her wig and wipes off her lipstick to symbolize, what, her true self coming through? She’s still Kendall Jenner she’s not fooling anyone. She grabs a Pepsi, cuts in front of Cello Guy, fist bumps the break dancer, and Picture Girl takes a historical photo as she hands a policeman the Pepsi. He drinks it, everyone cheers, and all of humanity is restored. Racism is over! Equal rights for all! Not a single drop of pepper spray was needed! Everyone walks away unscathed!

Come ON. WHOM is responsible for this? I want names. You can blame Kendall, but clearly she doesn’t know better. You can blame the company, but they’re not all in charge of making decisions. It’s the guy (I’m assuming it was a guy) who sat down in a room of other guys (again, strong assumption here) and was like, “what if we had Pepsi alleviate the civil unrest that has been plaguing our country for decades?” and another guy (definitely guy) said, “yeah and let’s get a hot girl in there too.” And then everyone in the room agreed that it was a good idea and then produced it. None of it was accurate, or sensitive, or necessary.

Pepsi tried to make amends by releasing this statement:

This is a global ad that reflects people from different walks of life coming together in a spirit of harmony, and we think that’s an important message to convey.

[via The Hollywood Reporter]