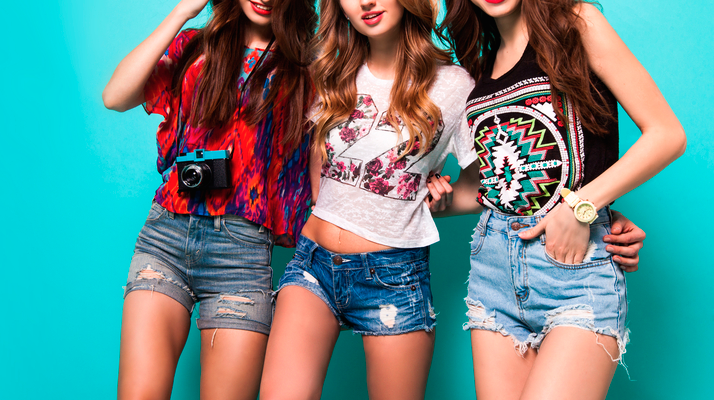 We’ve been talking about periods a lot lately, haven’t we? From “period panties” to “free bleeding,” both of which we starkly oppose. I honestly thought it couldn’t get any worse. Is it so hard to just take a Midol, use your chosen feminine product, and try to forget the fact that Mother Nature is sending you a week long “you beat pregnancy for another month” card? And no, that’s not sexist, it’s just good manners. We don’t appreciate when men walk around describing their bodily functions, I’m sure they would like us to extend the same courtesy.

So, just when I thought it absolutely could not get any weirder in girl world, I find this: Friends Forever Tampons. It’s literally two tampons, connected by one string. I’ve shared a lot of things with my best friends. Alcohol, wild nights, clothes, occasionally ex-boyfriends. But tampons is where I draw the line. And that’s when it occurred to me, that the owner of this company, Kat Thek is completely full of shit. Whether she’s delusional, a liar, or just a genius satirist, I don’t know. But what I do know is that this product is not fucking real, and everyone in the media is an idiot. Except for us.

The Huffington Post, Seventeen, and Jezebel all reported this story in some sort of thinly veiled disgust, but generally, without question. The fact that this does not make sense logistically, at all, doesn’t stop them for believing what they were told. The fact that there is no website, only a fucking tumblr page didn’t make them raise a brow either. And then, Thek’s interview with The Cut which reads exactly like a piece from The Onion only confirmed to them that this was for real.

What if you aren’t synced with your best friend yet?
Then you’re probably not actually best friends. Maybe take a road trip and try again next month.

Could there be a best friend maxi-pad prototype made? What would that look like?
One billion percent yes! We are not able to reveal the proprietary design details, but we can confirm that Friends Forever Maxi Pads will make it easy to get into the flow and ride horses/dance in white pants with your best friend.

I’m sorry, but I call shenanigans. Perhaps a prototype was created as a gag gift, but there is just no way this was ever intended to be sold and used. Aside from the fact that you physically could not wear clothes with a string holding you together, as even a dress would be pulled up, and more importantly that no one would ever fucking buy this product, Thek’s tone is just way too “OMG, you’re all fucking idiots. I didn’t think it would get this far” for it to be true. And dual/connected maxi pads? Come on. Get real, internet. Do better..