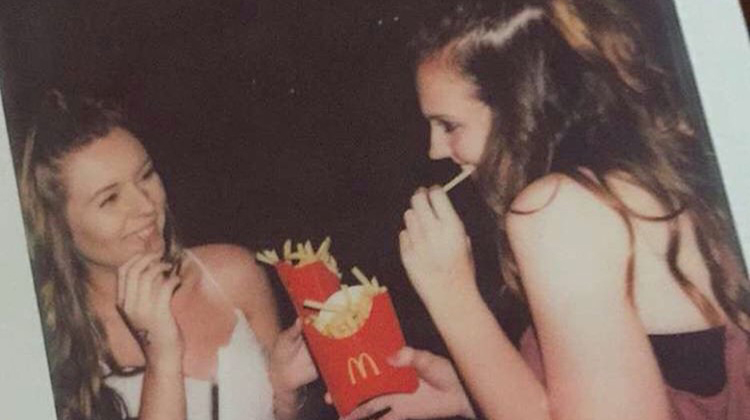 Forget shedding the freshman fifteen that has somehow become the junior thirty. Really, you’re just setting yourself up to be another resolution sellout. I know I’m sounding a little harsh but what you should be aiming for are realistic changes that will eventually help you achieve that dramatic change that should actually be spaced out over a couple of years.

Honestly ladies, don’t say you’re going to stop texting Brett from Sig Ep, because there will always be a new Brett and you’re back to your same old ways. Don’t swear you’re going to stop picking crappy guys to have sex with, because you don’t know they’re crappy from the jump. Really think about whether or not it’s possible to cut out carbs completely. And for the love of a good steak, don’t become vegan for the fad (trust me, it ain’t easy and sometimes you just need a hamburger).

Instead take those insane goals and dissect smaller, more attainable resolutions. For example, all my girls catching feelings for their Tinder matches — you know the ones who keep telling you that you’re wife material but never do anything about it — don’t lie to yourself and say you’re going to cut him off cold turkey. He is serving a purpose! Not only is he giving your ego its weekly dose of strokage, but he’s making sure that your vagina doesn’t spontaneously cave in on itself and close back up (it’s called Vaginimus, look it up!).

Let’s take a step back and maybe resolve to kick your swiping addiction. Take a quick, strong shot, step out of that restricting comfort zone and approach an actual real life guy. Start talking to that really cute guy in your lecture hall who always sits next to you. Go to the local supermarket and leave your number for that cute cashier who always asks way too many details about your day for it to just be causal. The point is that there needs to be a plan of action, steps to reach your ultimate resolution, and not just this one big unattainable ideal of a better self.

Ladies, yeah you, who think you’re going to magically lose the fifty pounds you’ve gained and have kept on for four years, stop. Instead of making yourself feel bad for not losing five pounds a week, make a goal to only have carbs for breakfast or to eat five to six smaller meals a day to boost your metabolism. Do things that promote good health! Make a plan to work out at least twice a week and then build from there. There’s really no need to torture yourself by vowing never to touch pasta again or swearing off any and all desserts. Honestly do a couple of squats, go on a couple of jogs, and binge out with a pint of Halo Top ice cream (280 calories for the whole damn thing).

Honestly if you want a genuine resolution, genuinely resolve to love and uplift fellow women. Jealousy, pettiness, and your incessant need to compare and degrade is what should really be thrown out (along with fishnets under jeans if you ask me). Women are rising up and people are finally starting to see and understand that we’re a force to be reckoned with in every aspect of life. Don’t stunt that growth just because some girl has something you want. Instead look to them for guidance and as an encouragement.

The point of this spiel is that you need to cut yourself some slack. The new year starts off with so many expectations (and a few drunken, regrettable moments), when it should start with anticipation and excitement at the possible growth of you as a person. Just give yourself a break and be okay with taking baby steps instead of the huge transformations you try to disguise as reasonable resolutions..