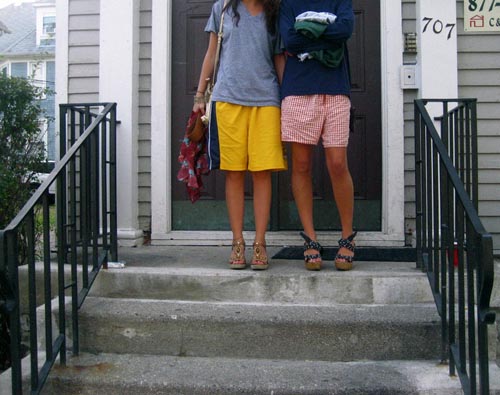 This morning I got an email with the subject line “Dealing With A Terrible Sister,” and to be honest, when I saw “terrible sister,” I assumed it was just two girls in a sorority who didn’t vibe well together — which happens all the time, and is still difficult to deal with, but I didn’t think that one sister was actually terrible. I was wrong.

Hey Veronica,
Writing hopefully for some advice. I honestly can’t stand one of my sisters and I have no clue what to do next. She has this amazing habit of making my boyfriends break up with me so she can sleep with them and it’s honestly getting on my last nerves. This has happened twice, and though I understand it is the guys’ faults as well, she knew I was in a relationship with both of them, and actively sought them out anyway. The first time I was dating a guy for awhile and brought him to our formal and just a month later he breaks up with me and 2 hours later she’s making out with him. The next day I get text from both of them, both apologizing and him pointing out that she directly texted him asking him to hook up with her. Basically the same thing happened with the next guy.

I’m just really confused how to go about it, because seeing her (though currently only on FB, thank god for study abroad) immediately makes me pissed and upset; and I shouldn’t feel that way about a sister. I don’t want to hate her, but she is so obviously complicit in all my heartbreaks and it just feels so toxic. And to top it off, she wont stop posting photos of him and her on social media. Do you have any advice?

I find there are a few rules for when it is and is not okay to hook up with a sorority sister’s former boyfriend/hookup/lover/random guy she’s obsessed with. When there are over one hundred girls in a chapter, it’s impossible to say that anyone who’s made out with a sister is strictly off limits. These are the rules to live by:

It’s never okay to hook up with someone who hooked up with a sister if:

It’s sort of okay to hook up with someone who hooked up with a sister if:

There were never any feelings (a one-night stand, or a purely physical casual hookup).
You ask permission first.
You didn’t know she used to date the guy, because you’ve never really spoken to her.

This girl is literally breaking all the rules. She hooked up with him mere hours after you broke up, so you still have feelings for the guys, she didn’t ask permission, they were BOYFRIENDS, not one-night stands, and she knows you well enough to know you dated if she knew you well enough to text you to apologize. It’s just shitty.

I’m normally against sending sisters to standards, because I don’t think a tweet about alcohol is really the end of an organization’s reputation. But fucking with the actual sisterhood by having problems like this between members? That’s something that needs to be dealt with. She’s mistreating a sister, and to me, that is a standards issue, and if I were you, I’d take it to them or to your executive board. Even fraternities have hearings over shit like this. It’s not upholding the values of your organization, it makes your sorority look bad to anyone who knows that a member would do that to another member, and it’s not good for fostering sisterhood. This is all especially true because it didn’t just happen once, it happened twice. That’s grounds for termination in my book.

If you don’t want to bring the sorority authority into it, you’ll need to at least hash it out with her. Tell her what she did is not okay. Tell her everything you’re feeling. And tell her to stop. She’s a shitty person who did a shitty thing and she needs to know how shitty it is. If you decide to duke it out on your own, I’d still make exec/standards aware of the situation and tell them you plan on trying to resolve things on your own, just to watch your own back so you don’t get into any trouble if you accidentally say something…unbecoming — as one might say to someone who fucked two of her boyfriends.

Know that your feelings are justified, and honestly, it’s okay to hate her. I know you care about your organization so much that you don’t want any toxicity in it, but she didn’t care about it — or you — enough not to do something toxic.

If you’re unwilling to confront her or to take it to the chapter, as I strongly advise you to do, you need to at least find peace within yourself. I’d try not to talk badly about her to other sisters other than maybe one or two trusted girls. Whatever you do, don’t talk badly about her to Greeks in other sororities or non-Greeks, because it will make your organization look catty. You are, however, encouraged to talk all the shit you want to your mom and high school friends. Unfollow her on all social platforms, because seeing her posts is only going to make you more upset if you truly want to remove the negativity from your life, as it sounds like you do. Eventually, just try to stay away from her as much as possible, because I don’t think you’ll ever magically be okay with her again. Your only option if you don’t confront her is to do your best to eliminate her from your life and from your mind.

I’m so sorry, and good luck getting things sorted out..