Middle School Made Me 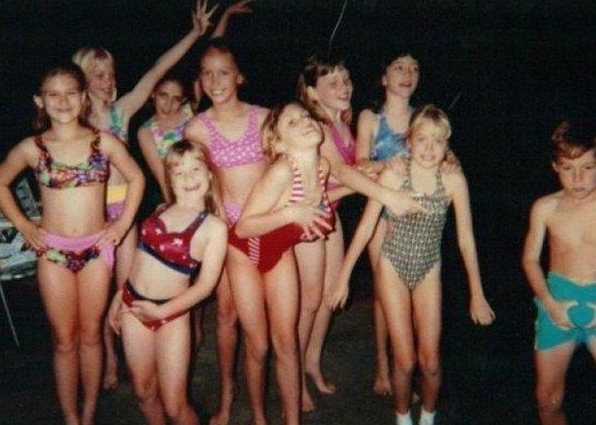 My cousin is in her first year of high school and she is beautiful. And I mean stunning. She has the body of a Victoria’s Secret model with perfect ringlet curls. She is 15 going on 25. Even in middle school, she was ahead of fashion trends and got more likes than me on Instagram. Even on the dumb ones that were screenshots of quotes she found on Pinterest. Not a single day in her life was awkward. Not faux-kward like Jess from New Girl or waving to someone who you thought was waving to you. This is full-blown, cut-throat, this-event-happened-seven-years-ago-but-it-still-keeps-you-up-at-night awkward. She’s not the only one either. It seems that the new millennium brought a new breed of little girls who grow up immediately, and I feel sorry for them.

This is a picture of me when I was 12 years old.

My teeth were an orthodontist’s worst nightmare, my half-ass brushed hair had my side bangs clipped back, my shirt clung to my bony figure and was yanked down past my crotch, and you can’t see in the picture, but I am wearing velvet gauchos and strappy Sketchers. I know because I wore them 3 times a week. My hobbies included chatting on AIM and prank calling 411. Puberty was not a pretty time in my life, nor was it for any of my best friends. We called ourselves “The Fearsome Fivesome”, which was fitting because we all looked slightly disfigured.

When I was 12, I got my period at school. I was one of the first of my friends to get it, or at least talk about it. I had no idea what to do, so I went up to my friend and told her I got it, and she jerked back and screamed “EW OH MY GOD NEVER TALK ABOUT THAT AGAIN!!!!!” Without such an original adverse reaction, I would not be able to appreciate my hour long conversations with my friends about how I am aggressively bleeding in chunks out of my vagina.

When I was 13, my boyfriend and his best friend were fighting about whose girlfriend was better. It was a pretty close fight until his best friend said, “Oh yeah? Well at least my girlfriend isn’t flatter than a surfboard!” My boyfriend lost the fight and I lost the last ounce of self confidence that I was holding onto. But the second I stepped into high school, I went from As to Ds. Without my years of being president of the Itty Bitty Titty Committee, I wouldn’t be able to fully appreciate the joy of falling out of a bathing suit top.

When I was 13, I found out what makeup was. I had just become friends with the coolest girl in our grade, and my newfound popularity came with a lot of pressure. If I was going to be hanging out with her, I had to look my best. So I made sure to let everyone know I was wearing makeup by wearing eyeliner thicker than the padded bra I was wearing. Youtube was still new and makeup tutorials were not yet made, so I got my inspiration from nature. Panda bears, more specifically. Without all the time I had spent impersonating the lead singer of Green Day, I wouldn’t be able to appreciate the magic just a good mascara can do.

As I age ever so quickly, I can’t help but attribute my mental development to the slow and uncomfortable physical development I had to go through. When you look like a praying mantis, you have to build a sense of humor to compensate for it. Forcing my inner beauty to outshine my outer beauty made both of them even more radiant. For future generations, I wish upon them terrible fashion, complete oblivion to hair tools, and thousands of dollars spent on orthodontia. Because if I’ve learned anything from middle school, it’s what doesn’t kill you, makes for a good story.