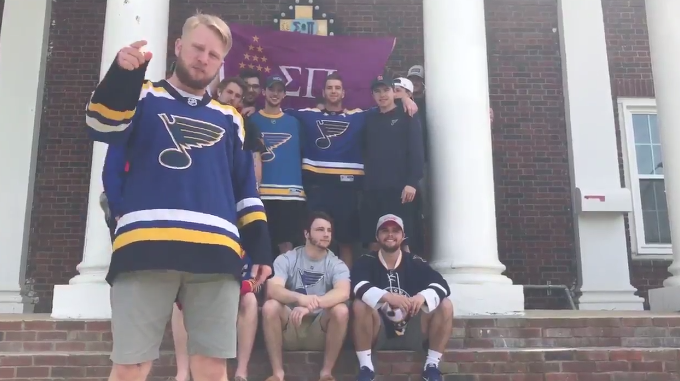 If I was asked to rank which sports are the best, it would take me about thirty seconds, because I would lose interest in that conversation really quickly. But I would tell you that getting drunk at a baseball game is an American staple that everyone should experience, and that Hockey rivalries are so rowdy and enjoyable that you would never think that the sport was invented by Canada (a.k.a. America’s hat).

Apparently members of the Gamma Sigma chapter of Sigma Pi agree with me, which is why a group of Blues fans extended the following offer to country singer Carrie Underwood:

Hey @carrieunderwood we have a challenge for you. Can we get some help @StLouisBlues @PredsNHL pic.twitter.com/p0rGMEEdlv

If the Nashville Predators win the upcoming playoffs against the St. Louis Blues, members of Sigma Pi will spend 200 hours working for the charity of Carrie’s choice. If the Blues win, Carrie (who is conveniently married to the captain of the Predators) has to host a concert in Columbia, Missouri, home to Mizzou and all of its diehard hockey fans. The proceeds of the concert would go to the charity of Sigma Pi’s choice, which 100 percent supports my theory that fraternities have a charity to party ratio which they strictly follow.

If you aren’t aware, hockey playoffs in college towns located in the upper Midwest and northeast are, in a word, lit. Hockey fans are notoriously rowdy, and every establishment with wings, beer, and a big TV is packed basically every other night. Mizzou often hosts a Blackhawks/Blues Rivalry during which the Chicago and St. Louis people call each other bad names for a week in the spring. But the Blackhawks are out, and with the potential for a Carrie Underwood concert in the near future, these playoffs are a pretty big deal to everyone at Mizzou.

Now all they need is for Carrie to notice the situation and take them up on it. I’m not a betting woman, mostly because I make terrible decisions and it would be counterintuitive to put money behind them, but I really hope she accepts the offer. I would totally make the trip to my Alma Mater if I knew I would be able to belt out “Before He Cheats” with the winner of the fourth season of American Idol. I won’t even pretend to be objective here; I love this chapter I’m rooting this wager. The thing I most admire most about fraternity men is their unfailing urge to turn literally anything into a party. The thing I should admire most about fraternity men is their ability to add a philanthropic approach to any situation.

Now all we have to do is hope the situation picks up enough traction to catch her attention, and keep our eyes peeled to the postseason series between the Blues and the Predators. Jesus Take The Wheel..